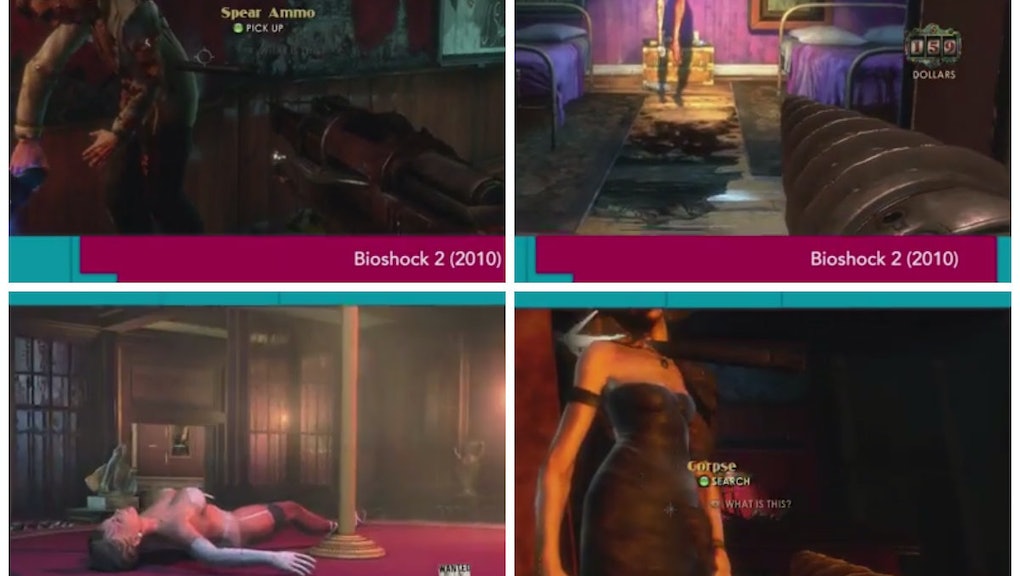 These Video Games Are Horribly Sexist. The Attacks on Woman Who Critiqued Them Are Worse

The news: Pop culture critic Anita Sarkeesian received widespread attention in 2012, for her Kickstarter project Tropes vs. Women, a Web series that promised to provide a feminist critique of video games. While the Kickstarter campaign was wildly successful — it raised $120,000, far more than the original goal of $6,000 — Sarkeesian was extensively attacked and bullied online for casting a critical eye on a popular entertainment platform.

Now the latest installment of Tropes vs. Women has arrived, and the hateful response from misogynist gamers has perfectly demonstrated why it was needed in the first place.

On Monday, Sarkeesian posted a segment titled "Women as Background Decoration." It examined how gratuitous sexual abuse and violence permeates contemporary video games. By the next day, she had received so many violent threats that she had to flee her home. And these weren't idle Internet threats — some contained accurate identifying information about Sarkeesian's home and family, enough for law enforcement to get involved.

In previous installments of Tropes vs. Women, Sarkeesian discussed how female game characters were reduced to damsels in distress or a Ms. Male Character: "The female version of an already established or default male character" who is "defined primarily by their relationship to their male counterparts."

But in "Women as Background Decoration," Sarkeesian focused on how female characters were subject to casual acts of sexual violence, all to make the universe of the game feel more dangerous or to make the male villains appear more vile.

That means exchanges like this from Dragon Age: Origins (2009):

But as Sarkeesian demonstrates in the examples below, the nature and presentation of these acts of violence are very different for men and women: "We can compare the way the murdered male bodies are displayed and notice the distinct lack of sexualization in their presentation. The male corpses may be designed to evoke a sense of horror or disgust, but it's not coupled with elements of sexual titillation in the same way that female bodies are," she says.

Note how a male corpse is laid out below, as opposed to the female ones:

The games are pointing out that violence against women is bad! Another point that people like to bring up is that the player is not meant to sympathize with perpetrators of sexual violence against women: Often, these acts are committed by the villains, and the player is entreated to kill them and rescue the female characters from their circumstances.

But as Sarkeesian points out, many video games present rape and abuse in a cavalier way that lacks nuance or female perspective, instead using female characters as disposable props in the men's storylines.

"These vignettes are not major plot points. Instead, violence against women is essentially used as a set piece to establish or punctuate the seedy atmosphere of crime and chaos-ridden fictional universes," Sarkeesian said. "These narratives are never about the abused women in question. Instead, depictions of female pain and victimhood are flippantly summoned to serve as sideshow attractions in storylines about other things altogether."

It's just a game! This is another common argument against feminist critique of video games and other forms of mass entertainment. Since it's just for fun and games, we don't need to get so serious about it, right? Can't we separate fiction from reality?

In a perfect world, that would be true. But the fact remains that media helps shape our culture, and we can't help but be affected when inundated with images of sexual violence against women.

"These women and their bodies are sacrificed in the name of infusing mature themes into gaming stories. But there's nothing mature about flippantly evoking shades of female trauma," Sarkeesian said. "It ends up sensationalizing an issue which is painfully familiar to a large percentage of women on this planet, while also normalizing and trivializing their experiences."

Women don't even play these games anyway! Finally, we come to the last line of defense: These games are created by men, for men, and if women have such a problem with them, maybe they should just go find something else to do. But that argument conveniently ignores the fact that women like Sarkeesian, with a deep knowledge of gaming, are not uncommon. As a matter of fact, women happen to make up nearly 50% of the game-playing public in America.

While Sarkeesian's critics have portrayed her as a party-pooper trying to take down the boys' club, the demographic reality of the gaming world is that that boys' club no longer exists. And this diverse public is not asking for video games to be eliminated, but for them to become better and provide a safe, inclusive environment for everyone.