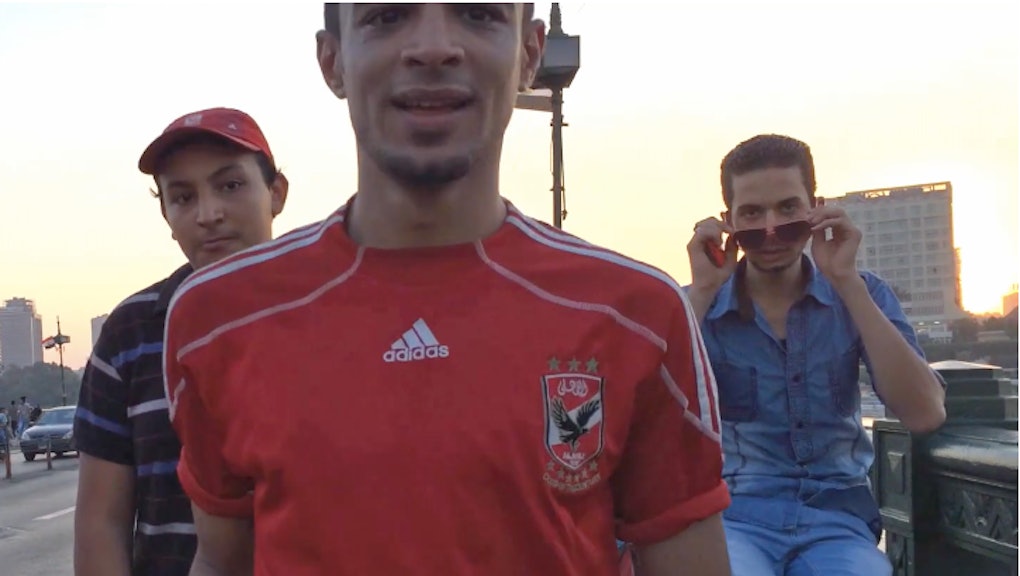 After countless incidents of feeling objectified and harassed, and listening to other women's experiences of the same, two female filmmakers decided to record what it's like for a woman to walk alone on Egyptian streets.

The result is short a video that portrays the uncomfortable omnipresence of the male gaze in this corner of the world. Titled "Creepers on the Bridge," the video was created by filmmaker Colette Ghunim and her co-director Tinne Van Loon. "Today we will be filming what it's like to walk down the busiest bridge in Cairo as a girl," American-born Ghunim notes in her introduction.

With earphones plugged in, Ghunim keeps cameras rolling as she walks down Cairo's Kasr El-Nil bridge, pretending that she's talking on her phone while actually secretly recording the way men react to her presence. She told Egyptian Streets that the two practiced their furtive camera work because it was important the men not realize they were being filmed. The result is a powerful testament to the fact street harassment doesn't necessarily need to be vocalized.

"Creepers on the Bridge" from Tinne Van Loon via Vimeo.

Initially, Ghunim and Colette planned to use the recording for their upcoming documentary about sexual harassment in Cairo. But when they put the video together, they realized it was strong enough to make a statement by itself: It has now been played 966,000 times on Vimeo alone.

Ghunim made sure to appear completely nondescript during the project — her clothing consisted of a long skirt, a t-shirt and a cardigan. "As a woman, Egyptian or foreign, comments and stares are the norm every time we step out the door, no matter what we're wearing," her colleague Van Loon wrote in the Vimeo description.

According to a survey conducted by the United Nations Entity for Gender Equality and the Empowerment of Women in 2013, more than 99% of Egyptian women said that they were harassed on a daily basis. Meanwhile a World Economic Forum report on the gender gap ranked Egypt a lowly 125 out of 136 countries surveyed. Due to the political unrest in the country, women's issues often take a backseat. But Egypt's interim president, Adly Mansour recently approved a law criminalizing sexual harassment.

"While we are critical of harassers in the streets of Egypt, this problem is by no means an Egyptian issue alone, sexual harassment happens worldwide, on varying scales," the filmmakers wrote on their Vimeo page. "This is why this video is going so viral, because so many people worldwide connect with the issue. Unfortunately Egypt just happens to be one of the most affected countries. This behavior is not inherently Egyptian or Arab. This behavior is that of people in a patriarchal society."

Hopefully, this documentary will help make sure fewer women have to endure this kind of treatment going forward.