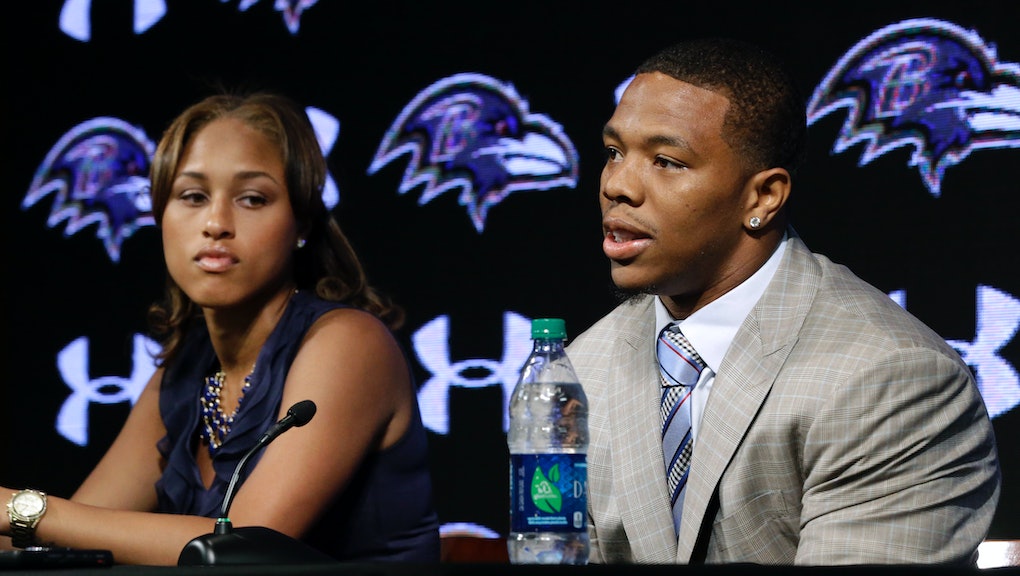 The news: On Monday morning, TMZ released a leaked video of Baltimore Ravens running back Ray Rice's violent attack on his then-fiancée Janay Palmer in February.

Just two games. Either the NFL hardly ever punishes its players, or something's not quite right here. When you compare Ray's suspension with other NFL players found guilty of other league rule infractions, the answer becomes clearer.

Hmmmm indeed: Besides the fact that the newly surfaced full video shows just how brutal Rice's beating was, the "hmmmm" levels skyrocket when you consider that a number of NFL players received significantly harsher punishments for doing something the majority of Americans think should be legal: smoking pot.

Even though NFL commissioner Roger Goodell and his league have said they plan to alter and improve the league's drug policy, that hasn't stopped the notoriously strict Goodell from handing down draconian punishments. As Mother Jones noted, here are six NFL players who received harsher punishments for smoking pot than Ray achieved for committing a gruesome act of domestic violence:

Josh Gordon, Cleveland Browns: The star wide receiver was caught as a repeat offender (his first offensive was also for marijuana in early 2014) and was suspended for the entire 2014 season.

Daryl Washington, Arizona Cardinals: Similar to Gordon, Cardinals linebacker Washington tested positive for marijuana for a second time, resulting in a full 2014 season suspension. Under the current rules, any further violations could potentially result in a lifetime league ban.

Von Miller, Denver Broncos: After testing positive for marijuana in Colorado (where the drug is currently legal), Broncos' linebacker Miller was suspended for four games in 2013.

Walter Thurmond, Seattle Seahawks: Like Miller, Seattle cornerback Thurmond tested positive for "substance abuse" (likely pot, but never explicitly said) in a state where marijuana is legal. He was suspended for four games in 2013.

Brandon Browner, New England Patriots: Formerly a Seahawk, the Pats' cornerback Browner's positive marijuana test resulted in suspension for all of 2013 and four games in 2014. He was also threatened with a lifetime ban.

Will Hill, New York Giants: Like Thurmond, Giants running back Hill tested positive for "substance abuse" and was suspended for six games in 2014 and four games in 2013.

If this list hasn't made it clear, let's just put it this way: The NFL's entire disciplinary policy is a joke. How in their right minds can the NFL suspend these players so many games (and potentially for life) for smoking marijuana, something that's, again, legal in two states and quickly gaining acceptance around the country, and only suspend Rice for two games for beating his wife, something that is not and will never be legal anywhere in the United States? Calling it a joke is being polite.

And it gets worse: To top it all off, someone is lying about the Ray Rice incident. As DeadSpin points out, it's unclear whether the NFL had access to the full surveillance video tape of the incident. The NFL and the Ravens are claiming they didn't, but others have reported they most certainly did.

At this point, further investigation is necessary, but either sports reporters are lying, the NFL was lying before or the NFL is lying now. So while the NFL is already being incredibly hypocritical with their punishments and rulings, add that it's also either lying or incompetent (which is worse?) and you get a league with a huge mess on its hands. As long as the NFL continues to run itself in this way, the problems will continue, and no fan should be happy about that.