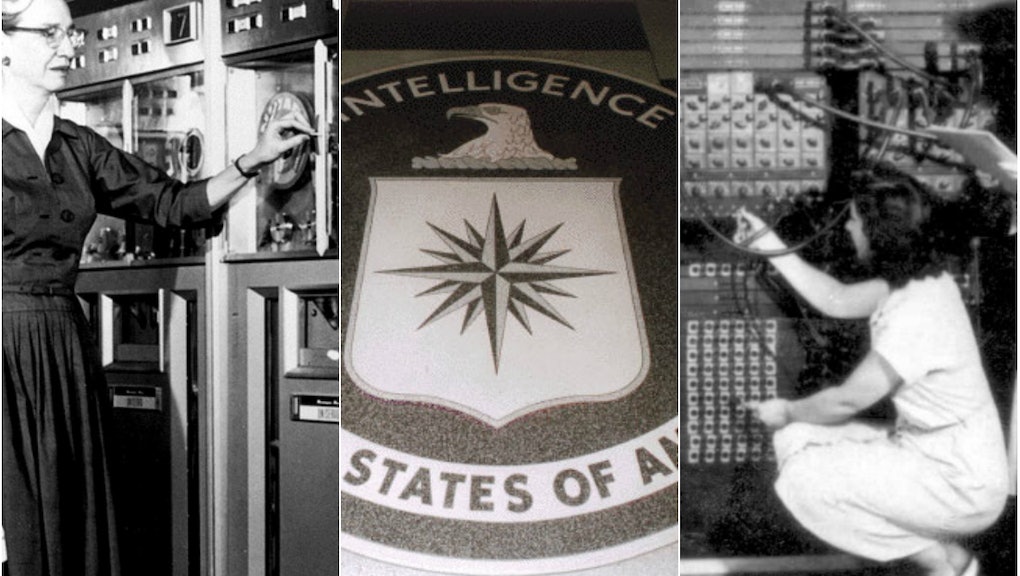 17 Rare Images Tell the Real Story of Women in Tech

Tech isn’t a male dominated field, in many respects. Women are responsible for some of the core innovations that drive the Internet today.

It’s increasingly important to remember as we read the disquieting stats about the industry. Diversity seeds creativity and it’s possible that women approach the development of tech in slightly different ways that, when combined with others’, helps produce a more powerful Internet. It’s why having more women in tech, and recognizing and celebrating their accomplishments that began over a century ago and continue today, is vital to producing a more powerful future.

The first great example is from 1843, when the now-famous Ada Lovelace published instructions for the world’s first computer program. Only, there was no computer yet to run it. It was the opening salvo in a long march of innovations.

2. Software for the second commercial computer is deployed — 1951.

Ida Rhodes (born Hadassah Itzkowitz) immigrates to the United States as a child during World War I and within a couple decades, is attending weekly gatherings with Albert Einstein.

She goes to work for the U.S. government and develops the C-10 programming language, which powers the second commercial computer produced in the United States (the UNIVAC 1).

Adm. Grace Hopper invents the first compiler, which is software that acts like a translator between human and computer. It takes programming languages (like JavaScript) and turns them into something the computer understands (like 0’s and 1’s), making it much easier for engineers to develop programs.

In 1961, Jean Sammet joins IBM. She leads the development of FORMAC, a computer language that interprets algebraic symbols and translates them into code. It becomes the first widely used programming language in history.

5. The telecommunications industry gets a boost — 1963.

Erna Schneider Hoover works at Bell Laboratories. While in the hospital after the birth of her second child, she designs a telephone switching system. The computerized system automatically handles call volume and makes centers like the one above greatly more efficient. It revolutionizes communications and she’s awarded one of the first software patents ever issued.

Decades later, the switching systems will be “direct descendants” of this one and used to route billions of emails.

During the Cold War, Frances Allen is IBM’s liaison to the CIA. At the agency, she helps develop and install Alpha, a computer language that can rapidly detect patterns in almost any spoken language. It becomes the foundation for advanced code breaking abilities at the CIA for the next 14 years.

Sister Mary Kenneth Keller, the first woman in the U.S. to earn a Ph.D. in computer science, breaks a “men only” rule at Dartmouth’s computer science center to help develop BASIC, a programming language that makes it easier for the public to write computer software.

It will still be around decades later.

Mary Allen Wilkes is a philosophy major from Wellesley College who ends up making history. She works at MIT and writes the operating system for LINC, which is the first minicomputer. Later, she builds her own computer at home and becomes the first home computer user in history.

Karen Sparck Jones, a schoolteacher, starts a new career in computer science and works on natural language processing and information retrieval at Cambridge. She introduces the concept of inverse document frequency, a statistical method for determining how important certain words are to a document — critical for search queries.

Variations on the method, also known by its acronym tf-idf, become a central component of search engines.

Lorinda Cherry joins Unix and starts working on text tools, including analyzing the Federalist Papers and compressing a digital phonebook. In the process, she helps develop statistical techniques that can be applied to finding typos that are incorporated into one of the Web’s earliest spell checkers, Typo.

Sandra Kurtzig starts a part-time, software programming business out of her home to keep busy. A client asks for a resource management program that Kurtzig realizes could have much wider applications, and she capitalizes on it by hiring staff and building additional applications. Her company, ASK Computers, attracts no interest from venture capitalists so she expands with her own money. A few years later, she becomes the first woman to take a technology company public.

Adele Goldberg starts as a laboratory assistant and rises to lead the System Concepts Laboratory at Xerox PARC in California. She develops the graphics-based user interfaces — think cursor, trash icon, etc. — that replace the old-school way of controlling a computer, by entering commands.

Steve Jobs asks for a demonstration of the software and Goldberg refuses. Those higher up at Xerox ask her to go ahead with the demo. She warns them that they’re “giving away the kitchen sink.” Jobs incorporates many of the innovations into the Macintosh desktop.

Radia Perlman, one of the few female students at MIT, gets a job at Digital Equipment Corp. She develops the algorithm behind the Spanning Tree Protocol, “an innovation that [makes] today’s Internet possible.” It allows a few transit points to create a vast network that distributes information.

It is a major piece of tech that powers the Internet. She earns the title of “mother of the Internet” — one she dislikes.

Shafi Goldwasser becomes fascinated by number theory and joins MIT. Along with Silvio Micali and others, she conceives of “zero-knowledge proofs,” which become a key tool in cryptography and cyber security. Her contributions to the field “initiate entire subfields of computer science” and trigger developments over the next few decades.

Sally Floyd is one of the most cited researchers in computer science. Floyd helps invent Random Early Detection, which, skipping over the gobbledygook, is used in almost all Internet routers and a key component in how information, like an email, goes from one inbox to another.

Monica Lam develops the concept of livePC, which is the ability to manage computers in a secure way, at scale — a major component of corporate computer infrastructure.

Marissa Mayer starts as the first female engineer at Google. She’s behind the iconic Google search home page and “the way users interact with Gmail, Google News and Google Images.”

Now, Mayer's a household name and the head of Yahoo.

And this is a list of things that have already happened. There are many incredible women in tech building the products of tomorrow. Whether it’s Mary Lou Jepsen, who’s working to make phones, laptops and computers self-powered (no more charging!), Corinna “Elektra” Aichele, who's bringing WiFi to any location, Monica Lam (also above), who leads the MobiSocial group at Stanford and is “[creating] a social internet, where users can share anything … while owning their data” or Ruchi Sanghvi, who’s behind the algorithm that powers our Facebook newsfeeds, the innovations women have made in tech will only be outpaced by the innovations they have yet to make.