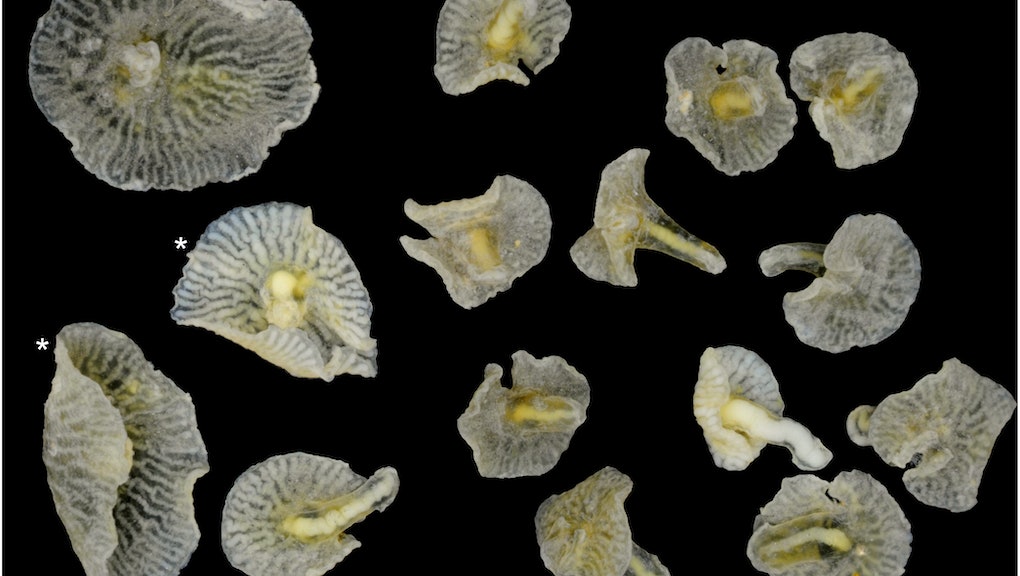 Scientists Discover Two Bizarre Sea Creatures Unlike Anything Seen Before

The news: Scientists say that two bizarre sea creatures newly discovered off the coast of southeast Australia are unlike anything seen before, with the New York Times reporting that the duo "defies all existing classifications of life."

The results of the team from Copenhagen University's findings, published in PLOS ONE, describe the strange, mushroom-like organisms - complete with their own new genus and family:

A new genus, Dendrogramma, with two new species of multicellular, non-bilaterian, mesogleal animals with some bilateral aspects, D. enigmatica and D. discoides, are described from the south-east Australian bathyal (400 and 1000 metres depth). A new family, Dendrogrammatidae, is established for Dendrogramma.

Co-author Jorgen Olesen told BBC News that "Finding something like this is extremely rare, it's maybe only happened about four times in the last 100 years ... We think it belongs in the animal kingdom somewhere; the question is where." Bearing a body composed of a flat disc and a mouth at the end of a stalk-like growth, the organisms resemble fossilized life-forms from some 635 million to 540 million years ago, during the Ediacaran Period.

The creatures were originally scooped up during a scientific cruise in 1986, nearly three decades ago. Researchers only noticed the life forms while categorizing other samples from the expedition. Since the samples were preserved in 80% alcohol, genetic analysis is impossible.

This is a really big find, with the researchers noting that "Dendrogramma could represent a new non-bilaterian phylum" — the taxonomic rank directly below kingdom. Here's what the researchers say distinguishes Dendrogamma from other known species:

Dendrogramma shares a number of similarities in general body organisation with the two phyla, Ctenophora and Cnidaria, but cannot be placed inside any of these as they are recognised currently. [...] We have not found evidence that the specimens may represent torn-off parts of colonial Siphonophora (e.g., gastrozooids). Neither have we observed any traces of gonads, which may indicate immaturity or seasonal changes. No biological information on Dendrogramma is available.

Other strange creatures: There's still much to find in the world's oceans, and researchers have cataloged strange new sea species since the invention of the scientific method. While looking in the 7,000-meter Kermadec Trench north of New Zealand in 2012, scientists from the University of Aberdeen found gigantic sandhoppers that were 10 times larger than their tiny counterparts throughout the rest of the world. Coelacanths, a type of bony fish, were thought to be extinct for 65 million years before scientists rediscovered them in the 21st century.

Other weird species scientists have turned up include the blackfin icefish, which lacks hemoglobin (making its blood colorless) and is capable of swimming in temperatures that would freeze freshwater thanks to an antifreeze protein in its bloodstream. In 2006, a U.S.-led team found a crab-like crustacean under 2,300 meters of water 900 miles south of Easter Island covered in what appeared to be luxuriant fur, dubbing it the "Yeti crab."

The discovery of what might yet turn out to be an entirely new phylum outstrips these other discoveries, proving we have much to learn from the oceans, if we don't destroy them first.