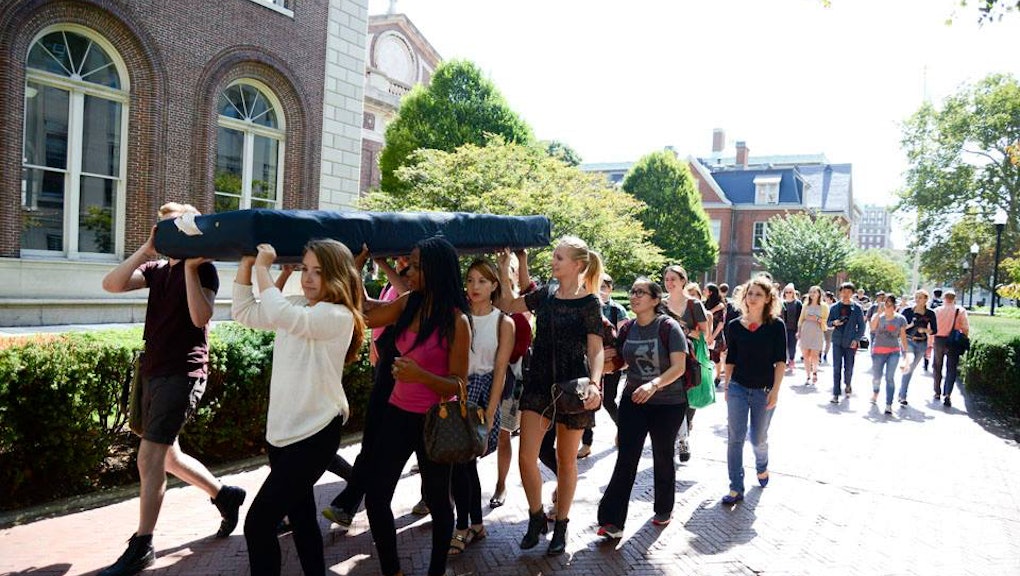 Emma Sulkowicz, the Columbia University student who has vowed to carry her mattress around campus until her alleged rapist is brought to justice, just had her load lightened in a big way.

The Columbia Spectator reports that a contingent of students calling themselves "Carry the Weight Together" has stepped up to aid Sulkowicz with her "Mattress Performance/Carry That Weight" project. On their website, Barnard College senior Allie Rickard writes, "I immediately noticed a tangible and meaningful way I, along with any other member of our community, could get involved on a daily basis in ending sexual violence and rape culture at our university. Let's help Emma carry her mattress every day."

The collective's purpose is both physical and symbolic. They're helping Sulkowicz carry the mattress itself — as per the rules of her project, she can only accept help, not ask for it — but they're also helping her in her battle against the school's administration, which Sulkowicz says is "more concerned about their public image than keeping people safe."

Carry the Weight Together held its first event on Wednesday. The collective will "give [Sulkowicz] and other survivors of sexual assault in our community a powerful symbol of our support and solidarity," according to Facebook.

Sulkowicz is one of 23 Columbia University and Barnard College students who filed a federal Title IX complaint against the school, alleging that it mishandled sexual assault cases. The university has recently come under fire for the way it has dealt with campus rape. In May, the names of alleged rapists were written all over bathroom stalls, and in June, students protested the perceived lack of action by the administration by wearing red tape at their graduation ceremonies.

"As long as he's on campus with me, he can continue to harass me," Sulkowicz wrote of her alleged rapist. Asked if Columbia officials had tried to contact her, Sulkowicz told the Cut, "I'm still waiting."