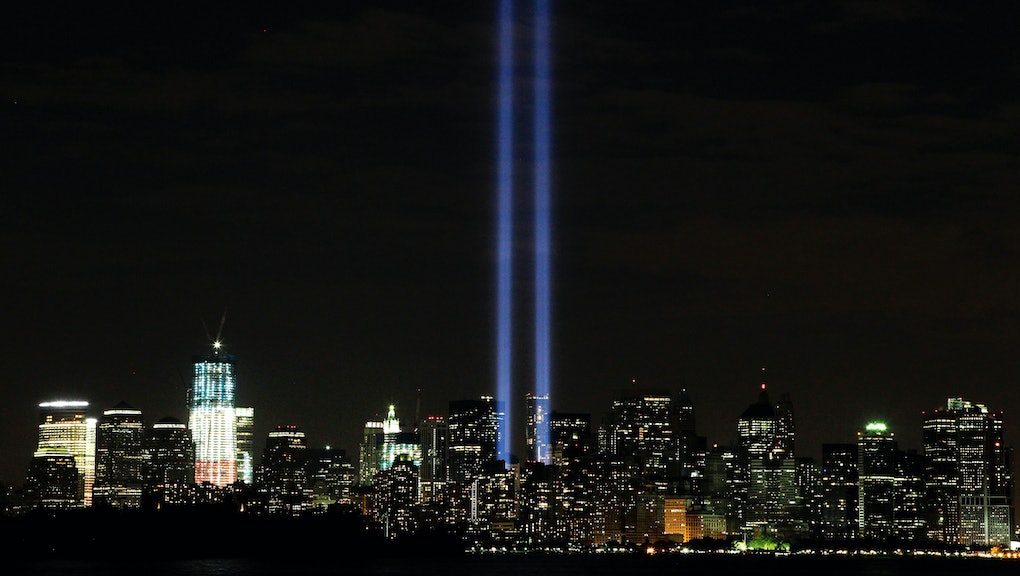 In the weeks after the September 11, 2001 attacks, New York City was covered in paper. Files, notes, letters and bills fluttered from the building's wreckage through the city like haunted tumbleweeds; as South African poet Breyten Breytenbach wrote in his 9/11 poem entitled "New York, 12 September 2001," "and in the East River confidential files and folders float."

Mixed in with all the paper from the World Trade Center were also poems — poems written on walls, on missing signs, in parks and forwarded to friends. Less than a month after 9/11, the New York Times ran a piece on the poetry phenomenon: "The Eerily Intimate Power of Poetry to Console." In it, author Dinitia Smith focused on the citywide turn to poetry after the towers fell: "In the weeks since the terrorist attacks, people have been consoling themselves – and one another – with poetry in an almost unprecedented way."

Today, 13 years after 9/11, people are still turning to poetry for comfort and understanding, and thanks to the Library of Congress' Poetry of September 11 page, readers can locate a wealth of poems about that September and its aftermath, including poems from some of the most important poets of our time.

The page, compiled by digital reference specialist Peter Armenti, spotlights a handful of anthologies and collections on the attacks and links to more than 50 individual poems. The grouping includes poems such as Edwidge Danticat's "On the Day of the Dead," Galway Kinnell's "When the Towers Fell" and C.K. Williams' "War."

One by one, tacked up by hopeful lovers, husbands, wives, on walls,

The collection of poems provides a different way to remember the day than the grand speeches, buildings, statues and museums we generally turn to. Reading poetry offers a much more quiet, intimate form of remembrance. The Library of Congress' grouping can be accessed by anyone at anytime. There are also numerous anthology books of 9/11 poems for those of us who'd like to hold the comfort in our hands.

The power of poetry to both console and reflect is profound. As Billy Collins, the national poet laureate during the time of the terrorist attacks, said in an interview with the New York Times, "In times of crisis it's interesting that people don't turn to the novel or say, 'We should all go out to a movie,' or, 'Ballet would help us.' It's always poetry. What we want to hear is a human voice speaking directly in our ear." Collins' poem on the attacks is also featured in the Library of Congress' compilation. His poem "The Names" reflects on specific individuals who lost their lives that day.

Throughout history poetry has served the very purpose Collins illuminated. After President Lincoln was killed, Walt Whitman quickly wrote both "O Captain! My Captain!" and "When Lilacs Last in the Dooryard Bloom'd"; at the start of World War II, W.H. Auden published "September 1, 1939," a poem that includes a line much circulated after the twin towers fell: "The unmentionable odour of death/Offends the September night."; and much of the Vietnam War was understood through song lyrics.

A week after the attacks, the New Yorker printed Adam Zagajewski's poem "Try to Praise the Mutilated World" (also in the Library of Congress collection) on the very last page of their special 9/11 issue. The poem was written before the attacks, but it seemed to articulate the pain and fear of the moment in an almost omniscient way:

It can be easy to forget that we are human – that pain and suffering and anger and hurt must be processed and felt and explored and shared and not simply posted. It is often in returning to poetry, both reading and writing, that we get the space and privacy to process and mourn in the same way that people have since the beginning of pain.

You can explore the Library of Congress' page for more poems about 9/11.

They jumped from the burning floors --

The photograph halted them in life,

Each is still complete,

They're still within the air's reach,

I can do only two things for them --