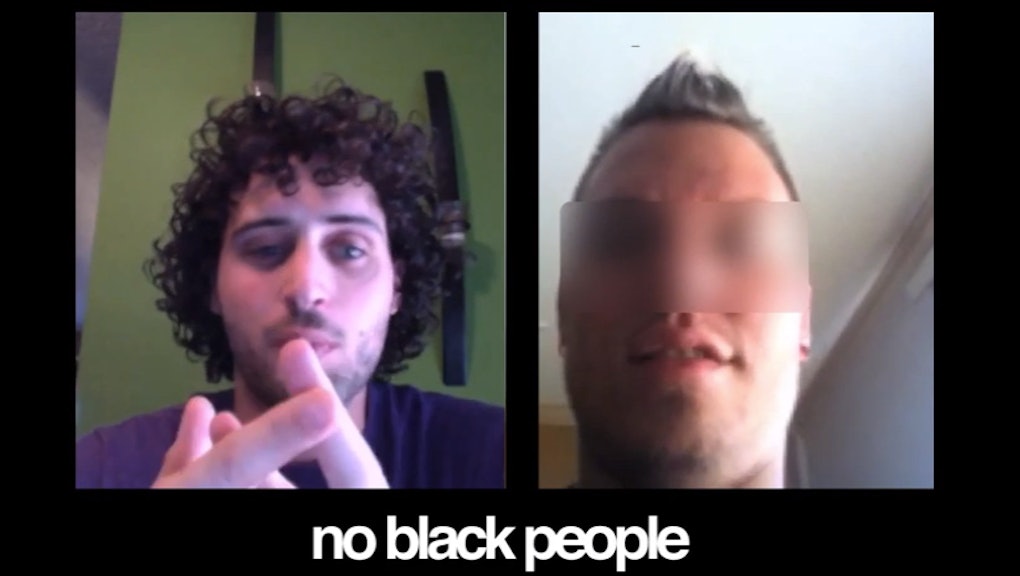 Would Craigslist Renters Ban Black People From Their Home in Exchange for Cheap Rent?

YouTube comedy duo the Lie Guys explore this matter in a telling, five-minute video. The pair set up their experiment by offering up a cheap apartment rental on Craigslist. In a series of Skype interviews, they then ask four potential tenants — two white and two Latino — if they'd be fine moving into the attractively priced $400 room in Hollywood, Calif. under the following rules: "No cats, no dogs, no black people" and "just make sure that you take your shoes off when you walk in" (Italics added for emphasis).

Here's how that went:

Incredible: As LaToya Peterson writes at Racialicious, a major takeaway from the video is the apparent ease with which the average person "tacitly [agrees] with racism." The experiment isn't exactly scientific, but it does speak to the troubling normalization of anti-black sentiment in discussions around living spaces.

For example, it's no secret that the history of American cities is one of imposed racial division. From Jim Crow segregation to redlining and "white flight," the U.S. government has repeatedly joined with real estate agents and landlords to maintain exclusionary housing practices.

The result is a geography notable for its segregation:

Yet even in 2014, the idealization of black-free housing and neighborhoods holds a remarkable appeal to many renters — one that real estate agents are very comfortable exploiting.

Exhibit A, via Brokelyn: Here's a property ad published by a company for the historically black Bedford-Stuyvesant neighborhood of Brooklyn, NY (2011 estimate: 60% black, according to the New York Times):

The real estate brochure imagines an idealized development replete with the trappings of gentrification: Artisanal coffee shops, outdoor cafes — and most notably, a milieu distinctly devoid of black faces.

The point being this: The Lie Guys' experiment doesn't just find a troubling pattern in people's willingness to accept casual racism. It speaks to broader sentiments — fortified by policy and geography — linking the absence of blackness to desirable living spaces.

It doesn't help that said separation persists in our social circles:

According to recent reports, most white Americans have exclusively white friends, while those with any minority presence in their friend group have just one black friend on average.

It's a pattern that must be broken if any productive interracial dialogue is to be had. And a huge part of the problem remains people's unwillingness to stand up to racism when it doesn't directly disadvantage them.