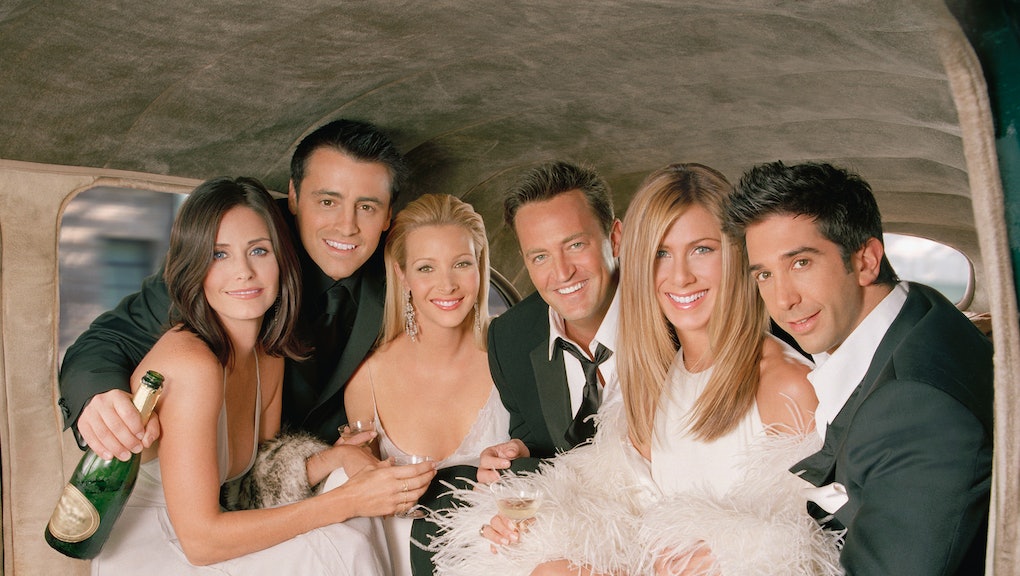 It's been nearly 20 years since Monica, Chandler, Rachel, Ross, Joey and Phoebe first met up at Central Perk for a fateful cup of coffee. The pilot of Friends aired on Sept. 22, 1994, and the last episode of the series aired in May 2004. Contrary to critics who believe the show left us with no enduring cultural legacy, Friends was surprisingly progressive in a way we might not have noticed at the time: it set the standard for how sitcoms could and would talk about sex.

The show wasn't perfect by any means. Four years ago, a viral YouTube mashup took the show to task for its embarrassing dearth of black actors in speaking roles. And as Bitch Media noted, another enterprising YouTube user made a nearly hour-long "supercut" of every gay joke Friends ever made. Looking back, the show is an uncomfortable history lesson in the casual homophobia and racism widespread in '90s television.

But for a '90s sitcom on a major American television network, Friends exhibited a remarkable openness about sex that set the pattern for sitcoms on air today. There would be no New Girl, no Mindy Project, no Sex and the City without Friends. At the exact same moment when the United States was whipping itself into a moral panic over Monica Lewinsky, Monica Geller and her friends were breaking television taboos and giving viewers a decade-long crash course in sex education.

Friends may seem tame when compared with today's media landscape but as the Daily Mail reports, when the show first aired, NBC West Coast president Don Ohlmeyer hated Monica's casual sex in the pilot so much that a test audience for the episode was asked whether Monica was "(a) a slut, (b) a whore [or] (c) a trollop." The show's creators stuck to their guns and refused to slut-shame Monica or any of the characters who engaged in casual sex.

The show also bucked the common television double standard of criticizing women who have casual sex while glorifying men who do so. In "The One Where Ross Finds Out," the famously frisky Phoebe refutes the misconception that all women equate sex with commitment. Phoebe is turned down for sex by a man who tells her that "sex can be, like, a very emotional thing for a woman" and that he's worried she'll get too clingy if they do the deed. Later, Phoebe tells Joey that she "convinced him" to have sex with her by telling him that "sex can be just about two people right there in the moment," an important statement coming from a female character in the '90s.

As a complement to its honesty about casual sex, Friends also showed that sex can be a powerful emotional experience. When Rachel and Ross have sex for the first time, in the planetarium to the stirring soundtrack of Chris Isaak's "Wicked Game," the show treated their affection for each other with earnestness and respect.

"You were worth the wait," Rachel whispers, "and I don't just mean tonight."

Friends also opened up conversations about contraception on television that other sitcoms of the time preferred to sidestep. In "The One Where Dr. Ramoray Dies," the show demonstrated the importance of safe sex practices by showing Monica and Rachel fighting over the last condom in the apartment to decide who would get to have sex with her boyfriend that night. Most current movies and television shows still fail to depict condom usage, but as early as 1996, Friends made condom use the center of an entire episode.

Friends was also honest about the fact that condoms have a relatively high rate of failure when compared to other methods of contraception. In presenting this truth, it unwittingly educated an entire generation of young viewers. In "The One Where Rachel Tells Ross," Rachel and Ross openly discuss the circumstances surrounding Rachel's unintended pregnancy.

"I don't understand how this happened," Ross says. "We used a condom!"

Much to Ross' surprise, Rachel reminds him that condoms do not work 100% of the time and that condom boxes do, in fact, include warning labels.

This open discussion of contraception had a measurable impact on the teenage viewers who grew up with Friends in the '90s. An article in the journal Pediatrics showed that of the 1.67 million teenagers who saw "The One Where Rachel Tells," most of them remembered specific information about condom efficacy from the episode and 10% of them had a subsequent conversation with an adult about condom use. The authors of the article conclude that shows like Friends can be "healthy sex educators" when they "work in conjunction with parents."

The most enduring legacy of Friends is one that seems almost invisible now. The show presented us with a cast of characters who had sex, talked about sex, had different sexual styles and who even openly discussed contraception. Friends quietly pushed the sexual envelope and permanently changed the way we talk about sex on television. As we pivot toward the show's 20th anniversary, we should thank them for that.