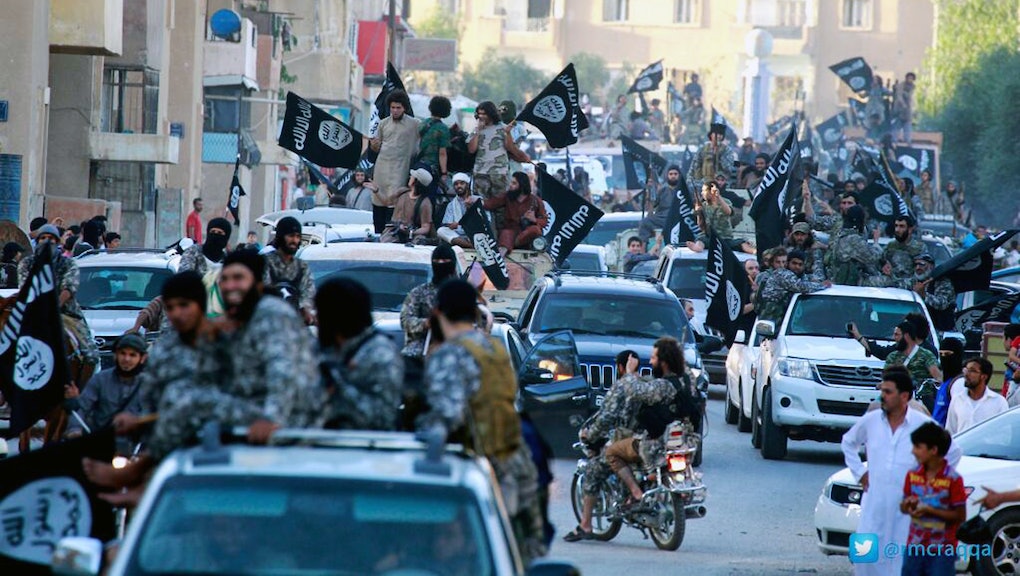 The Islamic State Is Way Bigger Than We Thought

The Islamic State may have more members than the United States first suspected — as many as two or three times more.

While original estimates put the number at 10,000, a new CIA report says IS has between 20,000 and 31,500 fighters. A CIA spokesman told the New York Times that the number reflects better recruitment by the militant group as well as "greater battlefield activity and additional intelligence."

What it means: President Barack Obama said in a speech on Wednesday that the ultimate goal of military action was to "degrade and destroy." This may pose a significantly greater challenge for Obama's international coalition when the group looks to be two or three times the original size.

The number of militants won't change the new strategy — continued air strikes in Iraq, new air strikes in Syria, training and equipping Syrian rebels to fight IS — but it could have a big effect on how long we're at war (even if the administration won't use that term exactly).

"I want the American people to understand how this effort will be different from the wars in Iraq and Afghanistan," Obama said. "It will not involve American combat troops fighting on foreign soil. This counter-terrorism campaign will be waged through a steady, relentless effort to take out ISIL wherever they exist, using our air power and our support for partner forces on the ground."

No Congress necessary? Just how long the strikes last could have a significant impact on its legality. Obama has asserted in his public statements in the run-up to Wednesday's speech that he doesn't need congressional approval to launch isolated strikes against the IS, but a lengthy campaign could make that position less tenable.

Members of Congress from both sides of the aisle are already chiding Obama for not approaching them first, although Democrats have been more flexible on his ability to declare short-term strikes.

"It is my view that the president possesses existing authorities to strike ISIL in the short term," Sen. Robert Menendez (D-N.J.) said following the speech. "But that a prolonged military campaign will require a congressionally approved authorization for use of military force."

Striking IS in Iraq and Syria is every popular among the American people — 71% of respondents in a recent poll supported air strikes in Iraq, while 65% supported them in Syria — and lawmakers don't want to come across as soft on foreign policy. But if air strikes turn into a long and drawn out campaign, don't be surprised if Congress starts to make a lot more noise about the White House keeping them in the dark.