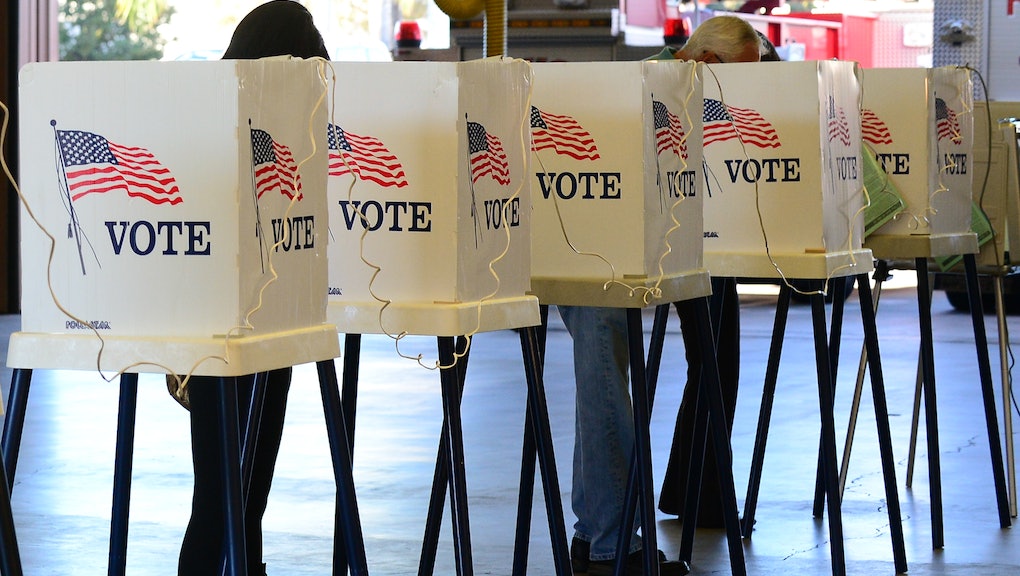 There's no two ways about it: voter turnout in the U.S. is abysmal. Participation has always been low, and it might be getting even lower. Politicians in many states are attempting to institute ever-stricter voting requirements that disproportionately affect young people and people of color. On top of that, the American public is more dissatisfied than ever with their representatives.

That combination of increased restrictions and apathy might mean it's high time to reinvigorate our democracy by fixing the way we vote. Getting more Americans to vote will require real structural revamping not only to the way we cast our ballots, but to the underlying reasons people stay home on Election Day.

Here are some simple ways to get more people to the polls and strengthen the electoral process:

1. Same-day registration at the polls

Perhaps the most effective way to encourage people to vote is to make the registration process easier. Young people have some of the lowest rates of voter turnout, but 18- to 29-year-olds who make it past the registration process actually vote in similar numbers to the rest of the population, and they voted in record numbers in 2008. Focusing on registering that demographic is essential to get more people to the polls, according to The Center for Voting and Democracy.

The U.S. could increase registration (and therefore voting) in one easy step by allowing people to register on Election Day. States that allow same-day registration increase the probability that young people will turn out to vote by 14% during presidential elections and 4% during midterms. If same-day registration were implemented on a nationwide scale, it could have the same huge effect as the Motor Voter law, which was passed in 1993 and brought 12 million new young people to the polls by allowing them to register at the same time they got their driver's licenses (side note: REM may have been responsible for passing this law).

There are also ways to make the actual process of voting easier. In states where polls are open for more than 12 hours, 5% more people vote, according to a study by professors at the University of California Berkeley. And mailed reminders ahead of elections also help, especially for people with less education. According to the UC-Berkeley study, those without a high school diploma were 7.4% more likely to vote if they got a reminder.

Allowing people to vote in the days preceding Election Day can also boost voting. While it's not quite as effective as keeping polling places open early and late, it can have a significant-enough impact to decide elections. Early voting helped Obama win North Carolina in 2008, when he actually lost the vote on Election Day but still won the state. Early voting days were cut from 17 to 10 in North Carolina this year, causing Democrats to worry that young people won't turn out and swing close elections to Republicans.

Voting by mail is probably the most controversial change made to voting in the past few decades. Politicians often complain that it could lead to increased voter fraud. But Oregon has proven the system works. For years it was the only state in the nation that allowed people to cast ballots by mail. That increased youth voter turnout by a whopping 40% in the state while maintaining the integrity of the vote: Fewer than 100 ballots have been cast in a potentially sketchy manner. That success led Washington and Colorado to implement the system in the last three years.

We can do almost everything else on our smartphones. Why not voting? Some argue we should take the logic behind mail-in voting one step further and allow people to vote online. But experts say that could open a Pandora's box of security concerns beyond voter fraud, including the possibility of exposing voters to hackers and viruses. Internet voting might be a reality some day, but there's still a lot of work to do to make sure any online voting system is safe and secure.

If the primary elections are any guide, the November midterms could break a record for low voter turnout. Most of the states that have held primaries so far have seen fewer voters than ever before. Democrats have been hit particularly hard, with 29% fewer showing up to the polls so far this year, compared with 15% fewer Republicans.

Much of this is due to the fact that voters tend to show up when there are big issues at stake or compelling candidates in the running, both of which seem lacking this year. No crashing economy, no health-care backlash, no disastrous foreign wars (yet). When voters feel like they have a stake in the outcome of an election, they're more likely to show up.

It's time to reinvigorate our democracy by fixing the way we vote.

Low turnout isn't only a problem this year. Presidential elections usually bring more people to the polls than midterms, but only 53.7% of eligible voters bothered to turn out during the 2012 election. It's even worse during midterms, with a measly 37% showing up in 2010. Turnout has actually stayed consistently low for the last 50 years, leading experts to posit that it's not politicians but the political process that's the problem.

If politicians can't even agree on simple ways to make voting easier, like same-day registration and early voting, it might be impossible for them to tackle the larger, societal causes of low voter turnout.

In other words, voting isn't immune from some the biggest political issues of the day: the cost of education and rising income inequality.

The central paradox of that, of course, is that if Americans want to change those big structural issues, they'll have to start at the polls.