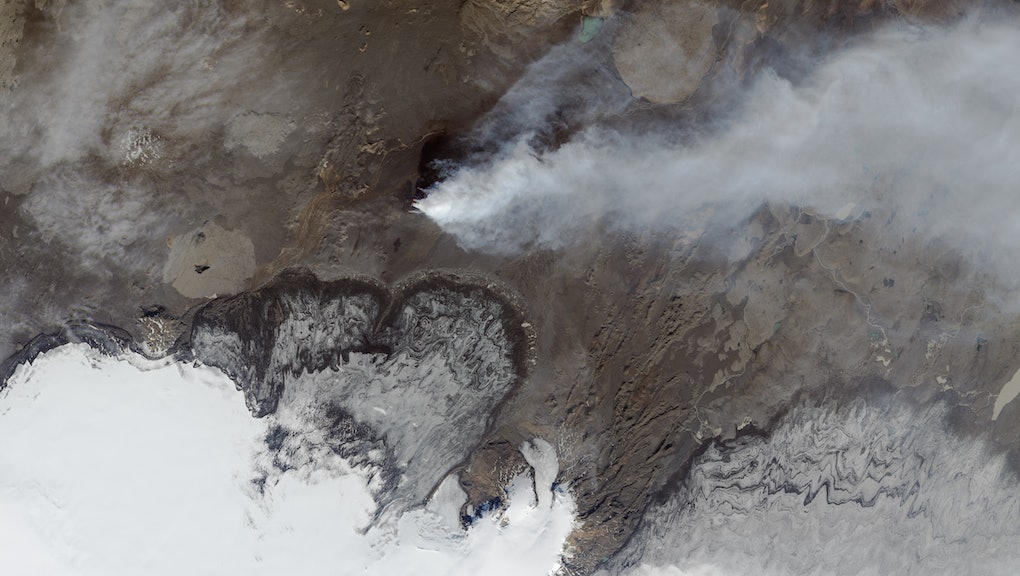 This Is What a Volcanic Eruption Looks Like from Space

Iceland's Bardarbunga volcano, situated under a massive glacier in the central part of the country, has been gradually erupting over the past few weeks. This led authorities to ban air traffic in parts of the country and to announce a "red alert" warning, the highest on the country's five-point scale, indicating "significant emission of ash into the atmosphere."

What's with the color in these images? The Landsat satellite doesn't always capture a 'naked eye' view of Earth's surface. "The Landsat sensors read light from 11 different 'bands' of the electromagnetic spectrum, and only five of those are visible to the unaided eye," explained the Atlantic's Robinson Meyer. "Of its six other bands, three measure infrared light and two measure heat. These images combine two infrared bands and the 'green' band. This makes the incredible heat and energy of the lava flows visible, while also allowing us to see greenery and other common land features nearby."

So what are we looking at? "Ice and the plume of steam and sulfur dioxide appear cyan and bright blue, while liquid water is navy blue," explain researchers at NASA's Earth Observatory said. "Bare or rocky ground around the Holuhraun lava field appears in shades of green or brown in this band combination. Fresh lava is bright orange and red."

These views from space are fascinating and informative, but the views from the ground are just as spectacular: