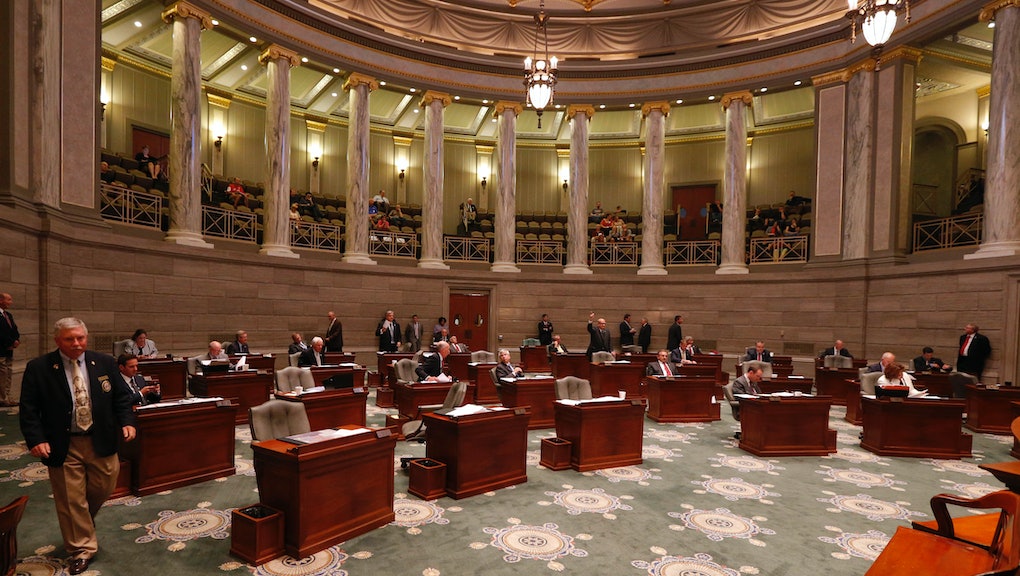 Missouri Teachers Are Now Allowed to Carry Guns at School

Hey, Missouri students — your teachers may be allowed to pack heat now.

A bill greatly expanding gun rights in the Show Me State passed the legislature yesterday, overriding Democratic Gov. Jay Nixon's veto. In addition to letting school districts arm teachers, the bill allows those with concealed weapon permits to openly carry their guns, prevents local governments from enforcing open-carry restrictions, lowers the age to obtain a concealed weapons permit from 21 to 19 and makes it illegal for police to disarm people unless they're placed under arrest.

Missouri is the 10th state to pass a law allowing school employees to carry guns since the Sandy Hook massacre in 2012. The legislation requires the state Department of Public Safety to create training guidelines for schools that want to designate an employee as a "school protection officer," according to the Associated Press.

Some training might be necessary, given a few of the accidents that have transpired in other states.

An elementary school teacher in Utah accidentally shot herself in the leg earlier this week, according to the Salt Lake Tribune. About 240 teachers in Utah, or 1% of the state's total, are licensed to carry concealed firearms.

Earlier in the month, an Idaho State University professor shot himself in the foot when his gun went off during a chemistry class, according to Reuters. The university's president called it an "unfortunate accident." (Idaho's law allowing concealed carry on campuses went into effect back in July.)

The Missouri bill's supporters stressed the training portions of the legislation as providing a safer atmosphere for schools. "I think it's important that we train those individuals if they are going to be carrying," Republican state Sen. Will Kraus told the AP.

But the bill's liberal detractors (and there aren't many in the legislature, seeing as the governor's veto was overridden) said the loosened regulations made things more dangerous. Some even took a conservative tack in their critiques, with Democratic state Rep. Stacey Newman telling St. Louis Public Radio it's "big government" legislation that would "overrule cities and elected officials around the state."

And then there's Republican state Rep. Rick Brattin, who told St. Louis Public Radio that everyone in Missouri should be armed, saying, "We live in a world that's evil, that wants to harm each and every one."

Have fun at school, kids!