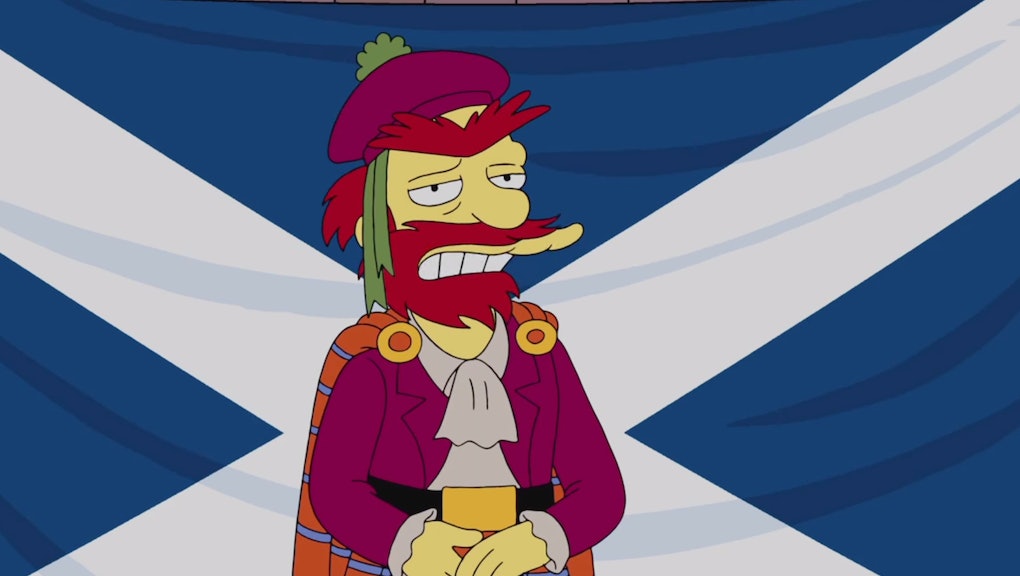 'The Simpsons' Groundskeeper Willie Has a Message on Scottish Independence

With the vote of the Scottish independence referendum only five days away, it's time to make a decision. Luckily, for any undecided voter out there, everyone's favorite Scottish groundskeeper has decided to share his thoughts. Take a look.

In the official FOX-released clip, posted to YouTube on Friday, Groundskeeper Willie, the lovably Scottish and terrifyingly awesome groundskeeper of Springfield Elementary School in The Simpsons, shares his take on the situation.

Initially, Groundskeeper Willie doesn't want to commit his support to either side, "the right one or the obviously wrong one," and points out that, "both sides of this argument have valid points: The freedom-loving heirs of the Highland tradition, and those who enjoy crawling like worms beneath British boots."

From that point, it was on. And eventually, Groundskeeper Willie then takes it a step further by offering his own services as the candidate to lead the would-be independent Scotland.

The vote: A long time coming, on Sept. 18, the country will vote on a referendum for Scotland's independence from the United Kingdom. The question will simply read "Should Scotland be an independent country?" and voters will only be able to answer yes or no. All residents in Scotland over 16 will be able to vote (meaning about 4 million people), and only a simple majority (50% of the voters, plus one) is required for a successful vote.

Scotland has been making a case for independence based on a number of factors economic freedom and rights, control of North Sea oil and general cultural differences. In a recent poll, theTelegraph reports that No campaign is slightly ahead with an eight-point advantage, 54% to 46%. However, that "Yes" number has been rising steadily for the last several months.