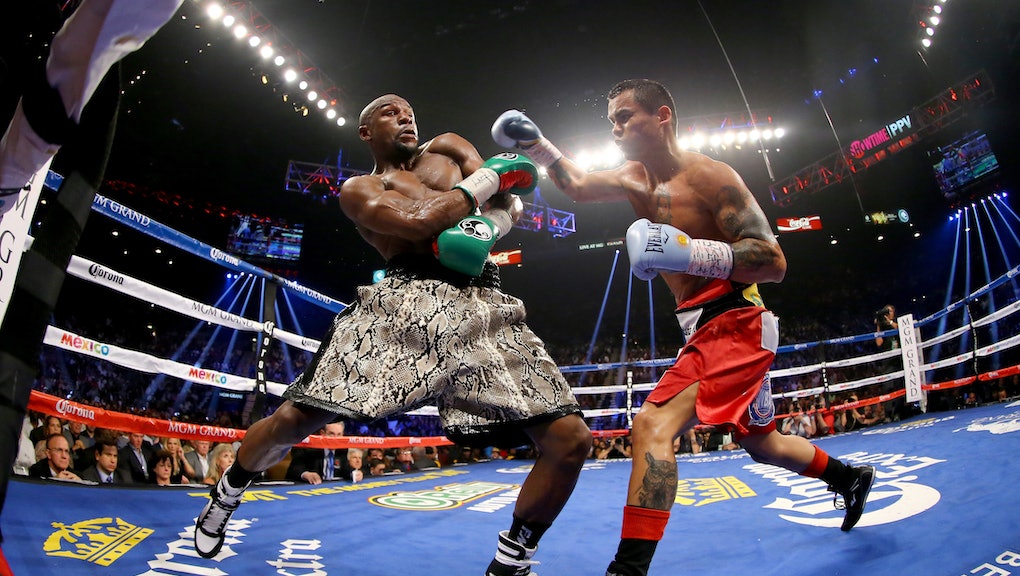 Floyd Mayweather Is So Far Ahead of Everyone Else, It's Embarrassing — But Will He Fight Manny Pacquiao?

His unanimous-decision win over Argentina's Marcos Maidana — a rematch of their May fight that had been closer than expected — was never in doubt. From the opening bell, Mayweather's balletic footwork and constant movement left his opponent lunging at thin air. He stood his ground and refused to let Maidana walk him down like in their first bout, ducking out of harm's way any moment he felt his back against the ropes. He landed 166 of 326 punches (51%), compared to 128 of 572 (22%) for Maidana. It was a master class.

Mayweather, at 37, showed once again he's the most technically sound and mentally agile fighter of his generation. He dictates the pace and geography of a fight like nobody else, except maybe Bernard Hopkins. He's a headache outside the ring, but a savant in it. In 47 pro fights, he's never been in serious trouble much less been defeated.

Floyd's detractors say he handpicks his opponents. The reality is Mayweather is just a difficult fighter to match. He’s so far ahead of everyone else, it's embarrassing.

The only possible exception, of course, is Manny Pacquiao.

Seldom do two fighters considered the best in the sport come from the same weight class — and rarer still are both roughly the same age. Suffice it to say a superfight between Mayweather and Pacquiao — the well-liked champion from the Philippines who's won titles in a record eight different weight classes — would be the richest promotion in history. It's failure to materialize to date remains the tragicomic nadir of boxing's institutional gridlock.

Why hasn't it happened? Pacquiao, who turns 36 in December, is promoted by Bob Arum. Mayweather is his own boss, contracting Golden Boy for promotional responsibilities on a fight-by-fight basis. Arum used to promote Mayweather before Floyd left acrimoniously in 2006. So far, Mayweather would rather pass on the highest-grossing fight in history than enrich Arum by making it happen. Each side insists the other is chicken. That's unlikely.

The real reason behind the impasse is far more pragmatic: Why take $50 million for a risky fight when you can take $25 million to fight opponents — one after the other — who offer a fraction of the resistance?

These people are smarter than we think. They know the value of Mayweather-Pacquiao will only balloon even as its true significance deteriorates by the day.

Pride is a depreciating asset. The nine-figure purse for a Mayweather-Pacquiao fight is not. The event will be salable for years.

It will happen, but it will be the last one.

It’s like when Lennox Lewis and Mike Tyson finally met in 2002. That remains the highest-grossing heavyweight fight of all time — a massive crossover event in the moment that demanded the same corporate gymnastics Mayweather-Pacquiao will require — yet Lewis was near the end and Tyson was more than a decade past his best. It generated truckloads of money for everyone involved, but bears little impact on the legacies of either man. You could say the same about the showdown between Sugar Ray Leonard and Marvin Hagler in 1987, another megafight that happened way past its sell-by date but still made heaps.

Mayweather has two bouts remaining on his six-fight, 30-month contract with Showtime and CBS — the landmark deal worth a potential $250 million he signed in February 2013 — yet the supply of credible opponents is running dry. That could be the most promising sign of all when it comes to a fight with Pacquiao, who has rebuilt nicely from a knockout loss to Juan Manuel Marquez in 2012.

"Manny Pacquiao needs to focus on the guy in front of him," Mayweather said after Saturday's fight. "Once he gets past him, he can look to the future. If the Pacquiao fight presents itself, let’s make it happen."

Look for Mayweather to fight out the remainder of his Showtime deal with two bouts in May and September of next year, then sign a record-breaking one-off — he'll name his own price — to face Pacquiao on May 7, 2016.

Until then, rather than punish Mayweather for a dominance we can witness but never fully comprehend, far better to enjoy the show and recognize the genius he conjures is something that doesn't come around often. Just don't expect a competitive fight.