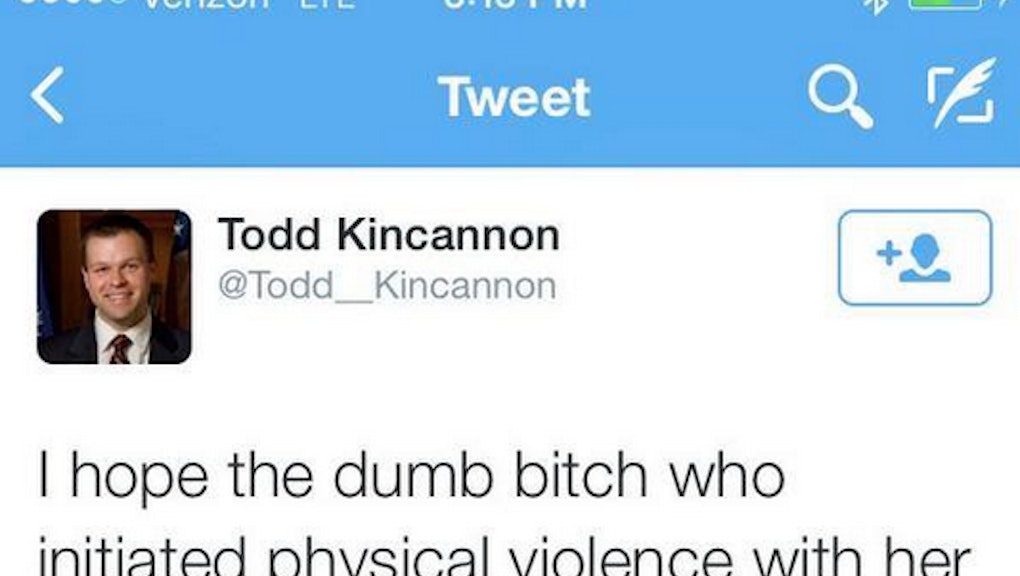 Here is the worst response to the Ray Rice domestic violence incident yet:

Ex South Carolina Republican operative, Todd Kincannon took to Twitter on Sept. 9 to post an utterly tone-deaf reaction to the TMZ video showing NFL athlete Ray Rice knocking unconcious his then-fiancee Janay Palmer. While the Tweet has since been taken down, it wasn't before someone took a screenshot of the tweet in which Kincannon vilifies the victim by saying that the "dumb bitch" got what she deserved for starting the whole mess.

Kincannon's gross display of misogyny did not stop there. He decided to post more defamatory and chauvinistic statements regarding domestic violence:

In contrast to the national outcry over the Ray Rice scandal that ensued after the video's emergence, Kincannon chose to take the road less traveled: He made light of a violent encounter.

This isn't the first time and won't be the last. If Kincannon's response to brutal abuse is shocking, then don't follow him on Twitter. The GOP troll has a history of harassing and smearing people on the social media outlet, constantly posting hateful tweets.

Back in January, Kincannon launched a sexist campaign against Sen. Wendy Davis comparing her to Monica Lewinsky and likening her to a prostitute.

Salon's Elias Isquith noted at the time, "It shouldn't come as a surprise, then, to find that Kincannon, who regards himself as some kind of Twitter provocateur, has caused an outrage on Twitter with his latest barrage of hate-tweets. But instead of focusing his ire on Trayvon Martin, trans* people, or U.S. veterans, Kincannon has set his sights on Wendy Davis, the Texas Democrat who is currently in the midst of running her underdog campaign to become the next governor of the Lone Star State."

Kincannon's attacks leave no stone unturned, taking down people for being poor or liberal or for any sort of general flaw he sees in people online – his latest stunt is to take down a woman online for posting a picture that he claims show her with herpes.

The takeaway: Kincannon is full of vitriol and hate. He degraded what is at the heart of the Ray Rice domestic violence incident and has no remorse for it. Domestic violence is a serious issue layered with complexities, all of which has gone right over Kincannon's head.

Kincannon isn't the only GOP-member to take a poor stance on the issue. Republicans lined up to oppose the expansion of the Violence Against Women Act in 2013, which brought to light the GOP's apathy of violence against women. Kincannon's response coupled with the Republican indifference is a prime example of how the left's rhetoric on the issue needs a serious overhaul.