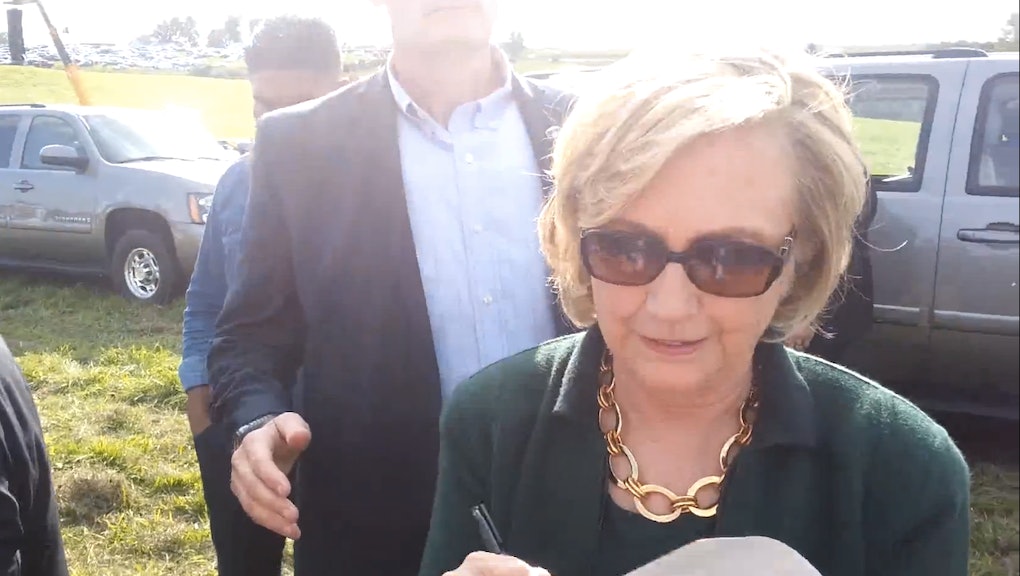 Three young DREAMers descended upon Hillary Clinton on Sunday to challenge her on immigration, proving that President Obama's recent decision to punt on immigration reform isn't being taken lightly by Latinos.

BuzzFeed's Adrian Carrasquillo reported the awkward encounter between Clinton and the three undocumented immigrants, which ended almost as poorly as previous encounters between DREAMers and Republicans Reps. Paul Ryan and Steve King:

"Hello my name is Monica Reyes and I'm an Iowa DREAMer," said the 23-year-old activist and senior at the University of Northern Iowa, using the term often employed for undocumented youth brought to the country as children.

Democrats up for re-election in November have successfully pressured the White House to hold off on its planned executive actions on immigration reform, which would potentially forward measures such as decreased levels of deportations and increased work permits without consulting Congress. The American public is bending more conservatively on immigration reform than in the past few years, spooking Democrats in competitive districts. Polling gives Republicans an early edge toward retaking the Senate, and some members of the president's party are not happy about the unilateral decisions on immigration reform Obama seems poised to make, which could be easy election-season fodder.

Clinton has her own reasons for avoiding getting caught making a compromising statement or ill-founded promise on immigration reform, because it's looking increasingly clear that she will run for president in 2016. During the same trip to Iowa, an important primary state, Clinton more or less alluded she was interested in Obama's seat in the Oval Office. As a clear front-runner, she probably has a perceived interest in distancing herself from a poorly polling Obama administration and avoiding taking strong stances on issues — especially one many Democrats fear could break the party's tenuous grip on the Senate.

None of this will surprise Clinton-watchers, who are familiar with her habit of appealing to moderate voters by striking positions to the right of other Democrats. For example, Clinton has been busy distinguishing herself from Obama by demonstrating she's much more hawkish on foreign policy than him, with some even calling her outlook essentially neoconservative.

As the Obama administration approaches the midterm elections, it's losing the support of key members of its coalition — mostly notably Latinos, who have shrunk from 75% approval in early 2013 to 57% now. Avoiding taking on immigration reform might be shrewd short-term politics, but it may have real costs for Democrats down the line. Finally, starry-eyed liberals might be disappointed in Clinton, who is again demonstrating her preference for cold political calculus over leftist ideals.