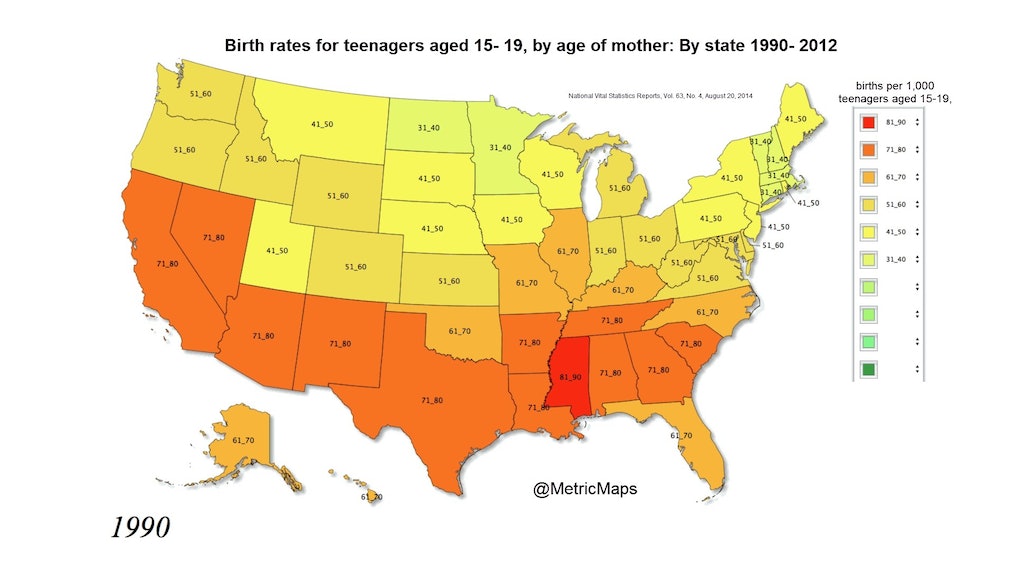 But that's just a national average. What about rates on a state-by-state level? And how exactly have these rates dropped? Quickly? Slowly? And why?

This new animation, created by @MetricMaps, a Twitter and Reddit account that specializes in "visualizing behavioral health data," tracks the decline of birth rates for teenagers aged 15-19 by state from 1990 to 2012. Take a look:

The map presents a couple obvious takeaways. The first is that teen birth rates are dropping across America. This in itself is a very good thing. Most teenagers are staggeringly unprepared to raise a child, and those who do manage still face a number of unique health problems and risks that can affect both mother and child and could potentially last for years.

Another clear takeaway is that some states and regions experienced a faster and more pronounced drop in teen birth rates than others. Much of the South and Southwest was particularly slow in this respect. But why is that? The answer, it appears, is probably fairly simple.

Abstinence education: There's almost no getting around it. States with abstinence-only education have the highest rates of teen pregnancies.

In a 2011 study published in the journal PLOS One, researchers found a similar correlation between a state's commitment to abstinence education and pregnancy rates.

Of course, there's a difference between pregnancy rates and birth rates, but the figures are undeniably linked. As this map demonstrates, there's also a considerable correlation between abstinence-only education and teen birth rates.

Everything's bigger in Texas: One of the most interesting and notable examples of this phenomenon comes out of Texas, which, according to ThinkProgess, has one of the highest rates of teen pregnancy in the country and a track record of strict abstinence-only education. Even with declining birth rates nationwide, the Lone Star state has lagged behind, but that didn't stop them from doubling down their efforts on something that was already not working.

Despite banners broadcasting the problems of teen pregnancy in Texas, the website focuses on "abstinence-centered teen pregnancy prevention programs" and "events for youth that discourage sex and early pregnancy," two strategies that have all but proven ineffective methods for preventing teen pregnancies. But to be fair, they did spell the website's name with a "4" instead of "for," so, yeah... they're pretty cool.

The takeaway: While it's a very good sign that teen birth and pregnancy rates have dropped to an all-time low in America, states like Texas continue to serve as examples of the problematic consequences of misguided abstinence-only education.

It's 2014. We're all far too educated to think that abstinence-only education is actually an effective method to prevent teen or unwanted pregnancies and births.