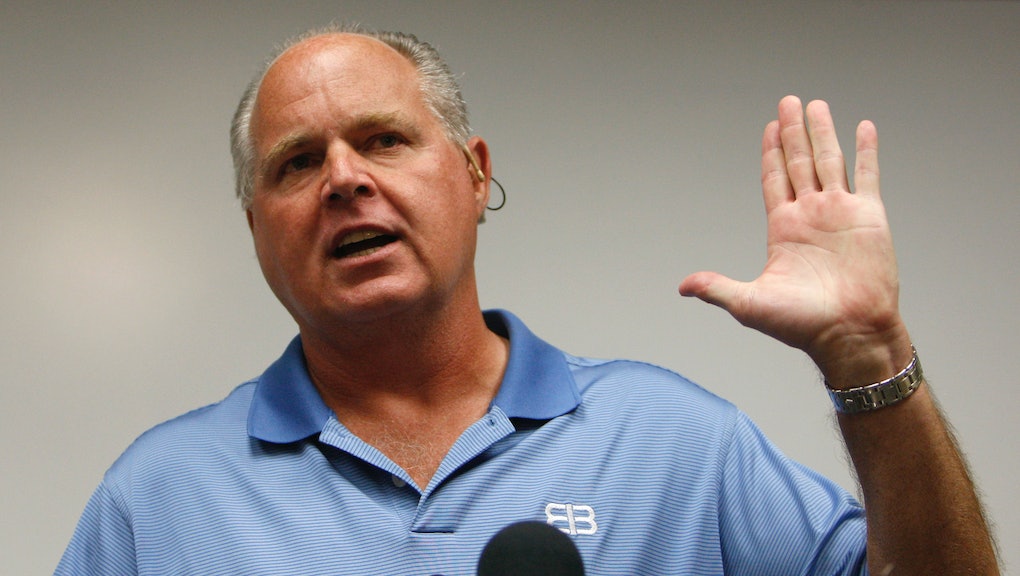 Rush Limbaugh Comes Out in Favor of Rape

Right-wing misogynist and all-around fountain of hate Rush Limbaugh has had some really classy hits in the past few years, from calling birth-control advocate Sandra Fluke a "slut" on live radio to suggesting that sexual objectification is just something ladies should learn to deal with. But somehow, Rush has managed to reach a new low. According to Limbaugh's latest commentary on college dating and romance, sometimes "no means yes if you know how to spot it."

Seriously. Media Matters reports that while discussing proposed sexual assault regulations at Ohio State University instructing students to ask for explicit permission before engaging in sexual acts with each other, Limbaugh basically applies the disgusting logic of "she was asking for it" to sexual assault:

Seduction used to be an art, now of course it's "brutish" and it's "predatory" ... [According to Ohio State policy,] consent must be freely given, can be withdrawn anytime, and the absence of "no" does not mean "yes." How many guys, in your own experience with women, have learned that no means yes if you know how to spot it? ... Are these [policies] not lawsuits waiting to happen?

Explicitly requesting consent "takes all the romance out of everything," claims Limbaugh before suggesting that Ohio State men couldn't possibly be responsible enough to follow the policy:

I don't know how men can be held to that Ohio State agreement, policy, anyway, because everybody knows in sex men don't think with their brains. Not the one in their heads, anyway. It's just so silly.

Wow. There are so many things wrong with these statements, but the worst part is that Limbaugh is basically proposing that men have the right to ignore a "no" when they really want to hear "yes."

There are very good reasons that Ohio State might want to order students to obtain a verbal yes before getting down. The University of Massachusetts Boston's David Lisak writes, "there is no domain of crime and violence as fraught with misunderstanding and misconception as that of sexual violence," such as the myth that rapists are knife-wielding strangers who viciously attack women. Most rapes are actually carried out by people known to the victim, and a 2002 study found that the majority of rapists whose crimes went undetected by the authorities were serial rapists who had committed a median number of three assaults. By ordering students that it is their responsibility to obtain consent, Ohio State is also laying clear guidelines to help students take an active role in policing and preventing sexual assault and empowering victims to speak up.

Consent is given based on the inviolable will of each partner involved, not how much one suspects the other really, secretly wants it. There's no room for debate whatsoever. In fact, research has found that rapists feel "more betrayed and deceived by women and had stronger dominance and power motives for engaging in sexual activity" than a control group. In other words, by suggesting that a "no" can be overruled by someone who feels otherwise, Limbaugh is speaking the language of rapists.

Limbaugh's rant about consent is downright disgusting even by his own low standards, but don't expect him to apologize for it. He's previously placed the onus of preventing rape on victims by arguing that "boys chase women" and belittled rape victims with offensive and unnecessary rape analogies.