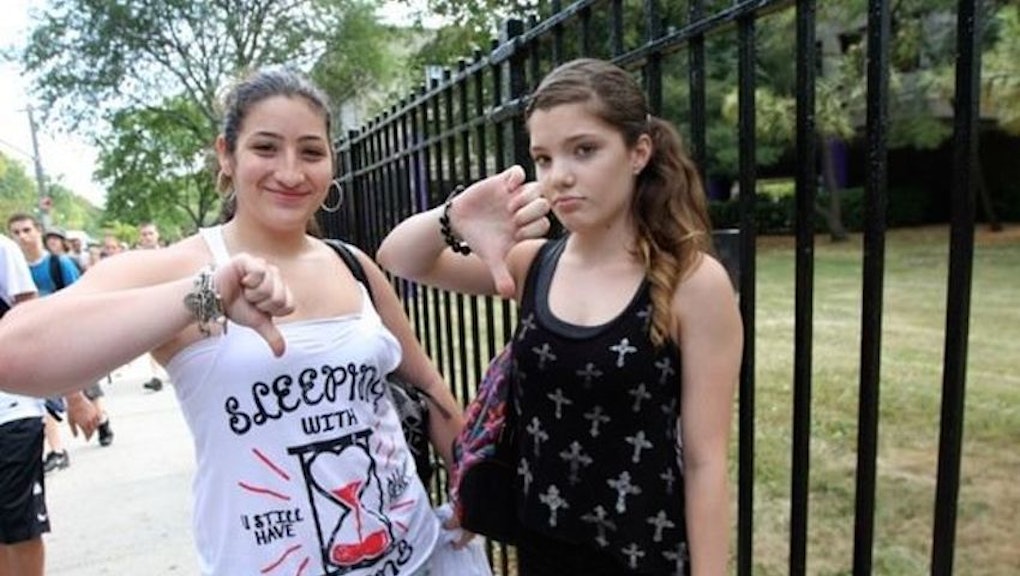 Since the beginning of the school year, Tottenville High School has attracted all kinds of negative press for implementing new dress regulations under its interim principal, Joseph Scarmato. The draconian rules have sparked criticism from both students and parents for being sexist and unnecessary; in particular, many female students have felt targeted by these rules and have responded by defying them.

And it's clear that they're making quite a statement: Over the past two weeks, around 200 Tottenville students have received detention for violating the dress policy — 90% of whom were girls.

"These students are rebelling to the point of basically wearing undergarments," one parent, who said he was considering filing a class action lawsuit, told the New York Post. "Scarmato is a total control freak."

Why is the school doing this? According to a statement by district high school Superintendent Aimee Horowitz, Tottenville students should not wear something that "creates a distraction, is dangerous or interferes with the learning and teaching process."

To enforce this, students and parents had to sign a six-page contract outlining the rules, which ban tank tops, short-shorts, miniskirts, leggings, skinny jeans, headbands, halter tops, sweats, hats, hoodies, sunglasses and more. The rules went into effect on the first day of school, despite there being no air conditioning in the record-high heat.

But these rules are disproportionately applied against girls. While the dress code claims to be trying to promote a safe academic environment, the fact remains that most of the prohibited clothing items are worn by female students — and the way teachers have been treating them is not helping the situation.

Female Tottenville students have reported being pulled aside by patrolling teachers in the hallway and being forced to change into gym clothes, have their parents drop off more suitable clothes or wait in the sweltering auditorium.

"Tottenville should just be an all boys school considering this dress code is only affecting the girls," one student tweeted.

And the male students are speaking up as well. "Personally, I think it's biased against girls," sophomore Michael Wiggberg Jr. told the Staten Island Advance. "I get that they want to teach us to respect ourselves and others, and that they want us to dress for success, but if you're comfortable and relaxed in class — not sweltering or fearful you're going to get pulled aside — you can pay attention better and learn."

Unfortunately, these rules are being enforced across the country. Just in the past few months, schools across America have ignited controversies by sending girls home, calling them "skanks," forcing them to bend down for dress inspections and even making them wear body-shaming outfits reminiscent of The Scarlet Letter — all for not adhering to strict dress rules.

"The issue here isn't that schools can't ever have dress codes; rather, it's that the language and standards set forth by these codes too often seem to be less about making sure students appear professional, and more about singling out young women (especially those who are more developed), treating their bodies as sexual objects with the potential to force boys to misbehave."

While a school's priority might be to provide a safe, pedagogical environment, verbally and physically shaming female students for their dress choices is not the right way to go about this. And when there are literally hundreds of students sitting in detention, it might be time to rethink your strategy.