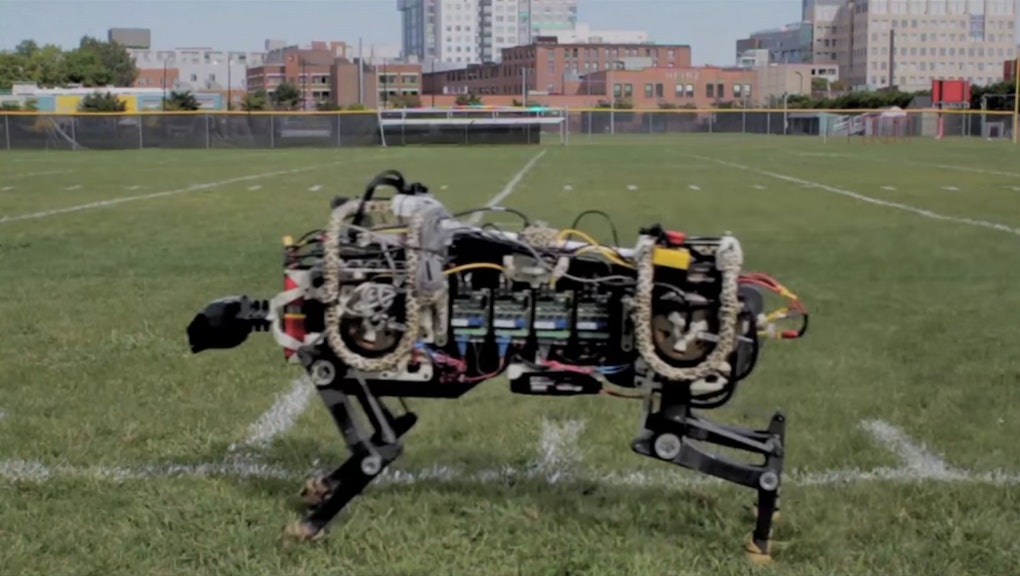 The future is here — and it's apparently a robot cheetah.

MIT's cheetah robot, designed to mimic the form of the animal and emblazoned with cheetah spots, can run unleashed and untethered — without support wires — at 10 mph. With a potential to outpace human running records at 30 mph, MIT's achievement will scarily exceed human capability. Funded by DARPA, the cheetah's quiet, functional and swift technology will likely be used in rescue missions.

This is a remarkable development in the robotics field, especially considering that the team behind this beast based it on the movements of the world's fastest land animal. This is the latest in several steps toward developing robots that mimic natural locomotion without human aid, from the likes of Harvard's soft robot that functions without human communication or Boston Dynamics' Wildcat, which ran unassisted outdoors at 16 mph.

How does it work? Kim and his colleagues built a "custom-designed high-torque-density electric motor." They developed an algorithm for a leg's exerted force while running based on how much time the leg is on the ground and in the air. That calculation enabled the team to control the robot's speed and vertical leap.

Kim compared the approach to running with one famous Jamaican sprinter.

"Many sprinters, like Usain Bolt, don't cycle their legs really fast," Kim said. "They actually increase their stride length by pushing downward harder and increasing their ground force, so they can fly more while keeping the same frequency."

The takeaway: Robots are no longer a thing of science fiction; they are very capable and increasingly independent machines. Robots like MIT's cheetah are becoming so common that there's even a case being made that the U.S. now needs a Federal Robotics Commission. But MIT's achievement means that we may finally have an agile, effective robot who can actually perform tasks without human input in the field. The cheetah-bot is boldly taking its first steps into the world — and it's totally unrestrained.