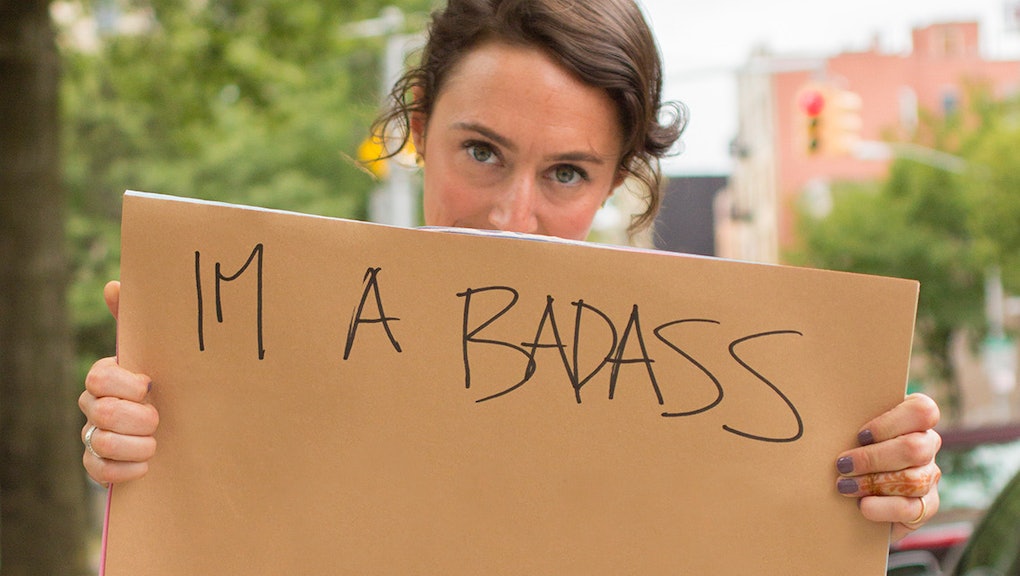 "The Gender Gap." This all-encompassing and infamous term often describes tangible inequalities between women and men. It covers things like the pay-gap (women make 77 cents for every dollar men make) and executive office gap (Fortune 500 female CEOs make 18% less than their male colleagues).

But too often ignored are the lower-profile, less quantifiable instances of how the gender gap affects women in their daily lives. And one such example is in cycling.

The bike gap is a huge and under-reported trend in cities around the world. In the U.S., 1 women for every 3 men gets around on a bicycle. In London, 77% of bike trips are taken by men and only 5% of women identify as frequent cyclists.

"Cyclists have been continuously increasing over the past decade and there has been attention for more and improved cycling facilities," Vera Klein, a graduate who has researched cycling behavior at the London School of Economics, told Mic. "But the issue remains that the so-called 'Cycling Revolution' is chiefly an endeavor of men."

I observed the gender bike gap firsthand this past weekend. Parked at the bottom of the Williamsburg Bridge in the Brooklyn borough of New York City, between five and seven men rode by before I saw my first woman.

So what explains this dearth of female cyclists? Four things: Women's aversion to risk, women's clothing, economic and time poverty, as well as sexual harassment.

"For me, it's an issue of prudence and injury and harm avoidance," Jaclyn Munson, a New Yorker — and, full disclosure, a personal friend — told Mic.

Women's clothing also presents its own set of problems. Not unsurprisingly, intense societal expectations placed on women's appearance affects their decision to ride. "It's hard to be the bitch I wanna be when my hair's sticking to my forehead," a fashion blogger — and enthusiastic, if sweaty, cyclist — bemoaned last year on the fashion blog XO Vain.

There's more. As Elly Blue, the author of Bikenomics: How Bicycling Can Save the Economy explains in a piece for Grist, the bike gap doesn't simply boil down to "fear and fashion." There are structural reasons that justify it, too. Women are more likely to live in poverty than men at every age, and also more likely to use inferior transport and travel patterns. Women are more likely to perform the lion's share of housework and take on more child care responsibilities, all of which "add up to more complicated transportation needs." So women don't only lack the money, they lack the time too.

Most women under 40 I came across were extremely pressed for time. A mother I tried to interview couldn't speak with me for more than a couple of seconds, complaining that she had to leave because she had "been up since 7 a.m.," had to "pick up groceries" and had "a ginormous children's birthday party to throw."

Finally, there's the inescapable culture of sexual harassment. It's hard to find a female cyclist who hasn't experienced some form of it. Klein suggests this is because "expressing one's bodily self in public means becoming increasingly visible, susceptible to spectacle and surveillance."

Cycling is most common during spring and summer, which coincides with peak street harassment season. New York cyclist Syreeta Mcfadden notes that clothing optimized for cycling may also increase the likelihood of cat-calling and hollering.

"Mostly during summer months when I'm wearing shorts, stopping at a light it's the standard, 'Can I ride with you?' noise," she told Mic. And she's not alone, as these responses on Twitter clearly prove:

Clearly, female cyclists face far more barriers when it comes to exercising their right to ride. Still, many fearless women ride anyway. Here's a small sample of New York's intrepid cyclists, each sharing their own personal stories. Join the conversation by tweeting your own picture using the #IBikeBecause hashtag.