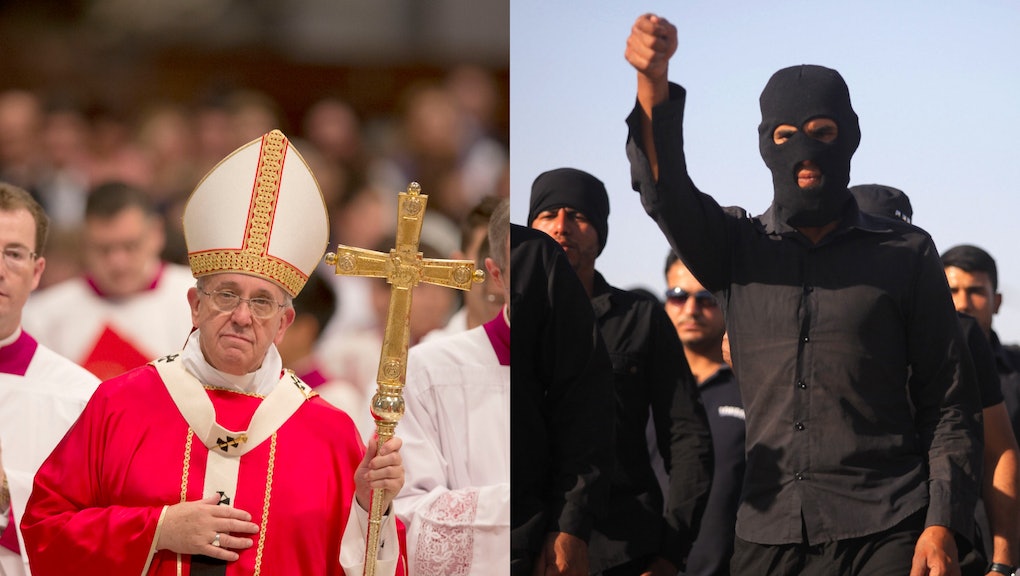 The Islamic State Has Set Its Sights on the Pope

The news: Pope Francis, famous for his progressive and down-to-earth papacy, has a dangerous new enemy.

The Iraqi ambassador to the Holy See has warned the Vatican that the Islamic State is intent on assassinating the Argentine pontiff.

Pope Francis will be traveling to Albania on Sept. 21, a predominantly Muslim country, and he is refusing to ramp up security during his stay, despite the fact that Ambassador Habeeb al-Sadr warned Vatican officials that the jihadists "don't just threaten," according to Italian newspaper La Nazione.

Even though al-Sadr's claims are not tied to specific intelligence, he is basing the threat on IS's track record of abuse, torture and mass killings  — in particular the massacre of Yazidi Christians in Iraq and the destruction of holy Islamic sites — represents an "indication of their intent."

With escalating conflicts in Gaza, Iraq, Syria and Ukraine over the past few months, the Pope has been outspoken about a need to end the global cycle of violence and bloodshed. He pleaded with terrorists and world leaders alike Saturday to put a stop to the slaughter happening around the world. "All war, he said, is 'madness,'" the Daily Beast reported.

Francis is just the latest addition to the IS's "enemies list." With the Islamic State's manpower around an estimated 20,000 to 31,500 militants, the group's threats are not to be taken lightly.

Here's a rundown of IS's other targets:

Prime Minister David Cameron. In the Sept. 13 IS video, showing the execution of British aid worker David Haines, Haines reads a script saying, "I would like to declare that I hold you, David Cameron, entirely responsible for my execution. You entered voluntarily into a coalition with the United States against the Islamic State. Unfortunately, it is we the British public that in the end will pay the price for our Parliament's selfish decisions."

Additionally, an 18-year-old British woman who is reportedly in Syria with the Islamic State is tweeting vicious threats like she wants, "David Cameron's head on a spike," noted the Independent.

Twitter Employees. On Sept. 7, various tweets related to IS accounts emerged encouraging assailants to "bring the war" to Twitter by killing its staff.

Russian President Vladimir Putin. In early September, the Islamic State released a video threatening Putin because of his ties to Syrian leader Bashar Assad and Russia's control over Chechnya, which the insurgents in the video promised to free.

Turkey. Back in August, IS warned that it would "liberate" Istanbul if the country didn't reopen the dam on the Euphrates River, which is a major water source for Syria, Iraq and Turkey. In Vice's video report, one member says that this is "a clear threat."

Jordan and King Abdullah. Jordan shares borders with both Iraq and Syria, and IS already has a strong presence in the country. So in a video (below) from April, IS militants threaten to invade the country and "slaughter" the King, who they see as a "tyrant." The video also depicts Jordanians denouncing their citizenship and promising future suicide attacks within the country.

The takeaway: The Islamic State is ruthless when it comes to threatening leaders, countries and people. IS is a sophisticated and skilled insurgent group that's shown a capacity for brutal, highly orchestrated acts of destruction, whether it's targeting the Yazidi or individual executions like journalists Steven Sotloff and James Foley and aid worker David Haines.