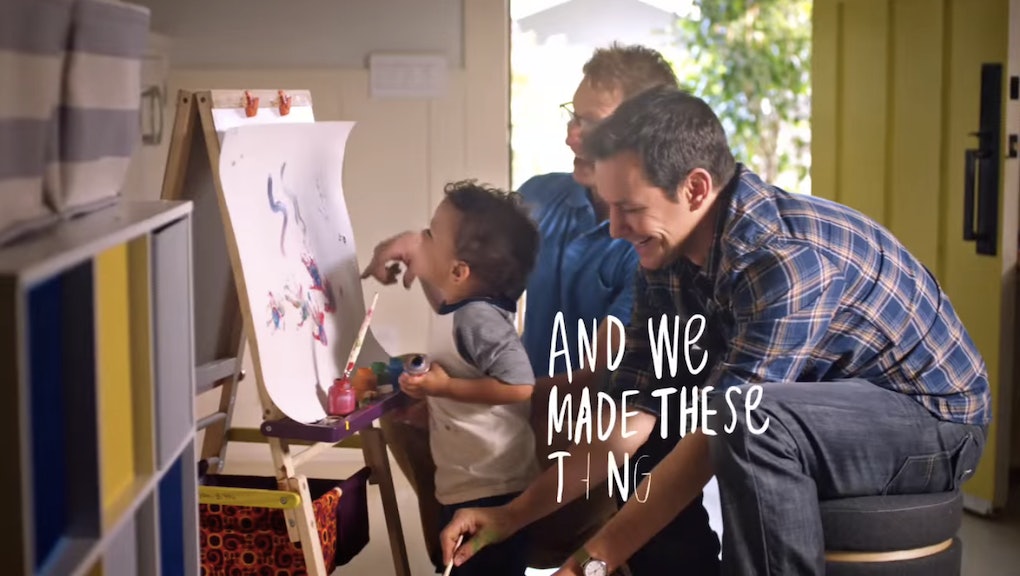 Target's Simple Ad Is the Perfect Response to Anti-Gay Boycotters

The news: When you target Target, be prepared for Target to target you back.

Earlier this month, a group of anti-gay activists including the National Organization for Marriage, the Liberty Counsel and American Decency Association announced a vociferous boycott of Target stores after the national chain signed a legal brief supporting gay marriage.

Now Target is fighting back with a series of ads featuring LGBT parents. The ads, released on Saturday, promote Target's new "Made to Matter" line of products, and feature a young boy and his two dads like it's no big deal, as it should be. Yay!

The anti-gay attacks: The vitriolic and homophobic attacks launched by the three organizations against Target are nothing short of disgusting, and their words are exactly the same.

"I hope people will go into Target stores across the country and tell them that they are no longer going to buy products there because Target has joined in the attack on the institution of natural marriage," Liberty Counsel Action vice president Matt Barber told OneNewsNow.

"The brief they signed in court this week insinuates that people like you and me, who would vote to uphold traditional marriage, as akin to segregationists and racial bigots. Would you want to shop at a place that viewed you in that way?" NOM president Brian Brown wrote on the group's website. "Tell them how much we resent being fashioned 'bigots' and 'haters' for doing so!"

A Target-ed response: As it turns out, Target is quite fine with treating anti-gay activists like bigots, and the corporation apparently doesn't care whether or not they spend their money in its stores. And why would they? Polling indicates that almost 60% of Americans now support marriage equality for gay and lesbian couples, while more than 50% of Americans in all regions of the country, including the Deep South, are now in favor of gay marriage. Even 64% of young evangelical Christians support the right of same-sex couples to marry.

As the New Civil Rights Movement's David Badash notes, NOM was able to quickly gather signatures for the boycott, but has fallen on some tough times:

The ads are more evidence that the Christian anti-gay movement is losing ground in the gay marriage debate (though it's unclear why we're even calling it that anymore), and frankly it's the last thing any major corporation needs to be associated with these days. Homophobia isn't just wrong, it's bad business.