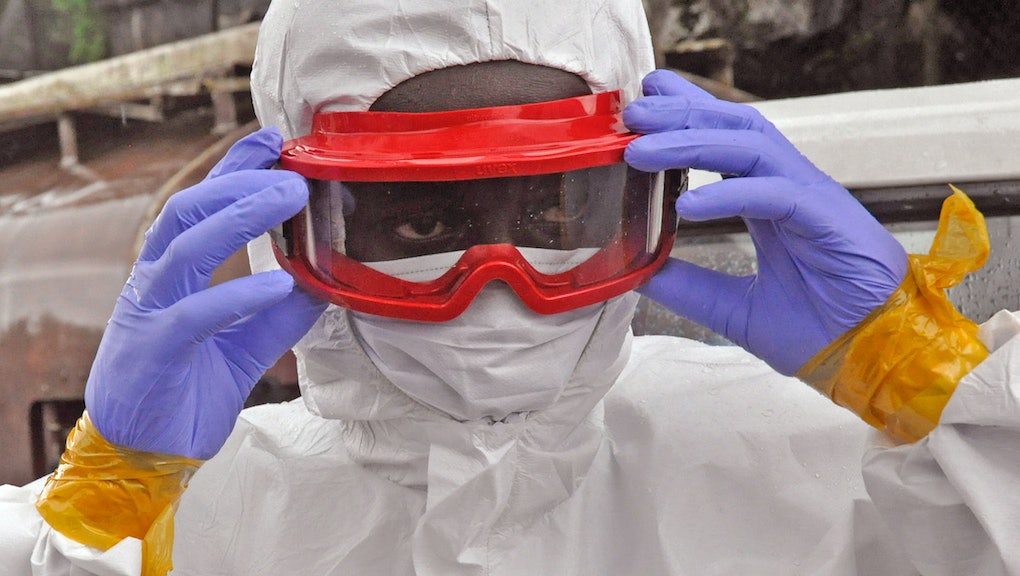 Why the World Should Actually Care About Africa's Ebola Epidemic, in One Alarming Chart

The United States announced Tuesday it will send 3,000 troops to help tackle West Africa's Ebola outbreak as part of a new initiative to combat the spread of the disease. Reuters reports that the new plan to combat the disease, which has killed more than 2,500, includes a "major deployment" in Liberia, building 17 new treatment centers, training thousands of healthcare workers and establishing a "military control center for coordination."

The Eurosurveillance paper, co-authored by Hiroshi Nishiura of the University of Tokyo and Gerardo Chowell-Puente of Arizona State University, attempts to mathematically assess how West Africa's Ebola epidemic may grow in the coming months by using the reproductive rate of the virus in the Guinea, Liberia and Sierra Leone outbreaks. Using case reports to determine the "reproductive number" — the value that determines how many cases of disease are likely to be caused by any one infected person.

Nishiura and Chowell-Puente's research paints a grim picture for Ebola, especially given the difficulty the global health community has faced in containing the virus. The World Health Organization says the epidemic's growth has been "exponential" in recent weeks, especially in Liberia. Local health care systems and medical personnel in countries like Sierra Leone have been overwhelmed by the influx of patients. In some cases, Liberia's Ebola patients face a lonely fight against the disease.

"It's spiraling out of control. The situation is bad, and it looks like it's going to get worse quickly," Centers for Disease Control and Prevention Director Dr. Tom Frieden told NBC News earlier in September. "There is still a window of opportunity to tamp it down but that window is closing, and we need to act now. ... This is different than every other Ebola situation we've ever had. It's spreading widely, throughout entire countries, through multiple countries, in cities and very fast."

On the upside, President Obama's announcement of military aid may be a step in the right direction. As Maryn McKenna wrote at Wired, two major figures in the U.S. public-health community have called on more concentrated action to battle the epidemic in the past week.

"The level of response to the Ebola outbreak is totally inadequate. At the CDC, we learned that a military-style response during a major health crisis saves lives," wrote ABC News chief health editor Richard E. Besser in the Washington Post just last week. "We need to establish large field hospitals staffed by Americans to treat the sick. We need to implement infection-control practices to save the lives of health-care providers. We need to staff burial teams to curb disease transmission at funerals. We need to implement systems to detect new flare-ups that can be quickly extinguished. A few thousand U.S. troops could provide the support that is so desperately needed."

"We need someone to take over the position of 'command and control,'" argued Dr. Michael Osterholm, director of the Center for Infectious Disease Research and Policy at the University of Minnesota, in the New York Times. "The United Nations is the only international organization that can direct the immense amount of medical, public health and humanitarian aid that must come from many different countries and nongovernmental groups to smother this epidemic. Thus far it has played at best a collaborating role, and with everyone in charge, no one is in charge."

Of course, we know how to deal with Ebola in America: As epidemiologist Dr. Tara Smith has written for Mic, the U.S. is well-prepared to contain and control the disease within our borders. But there's still reason to take West Africa's epidemic seriously on a global level. As Maryn McKenna wrote at Wired, public health officials "prefer to express themselves conservatively. ... So when they indulge in apocalyptic language, it is unusual, and notable."