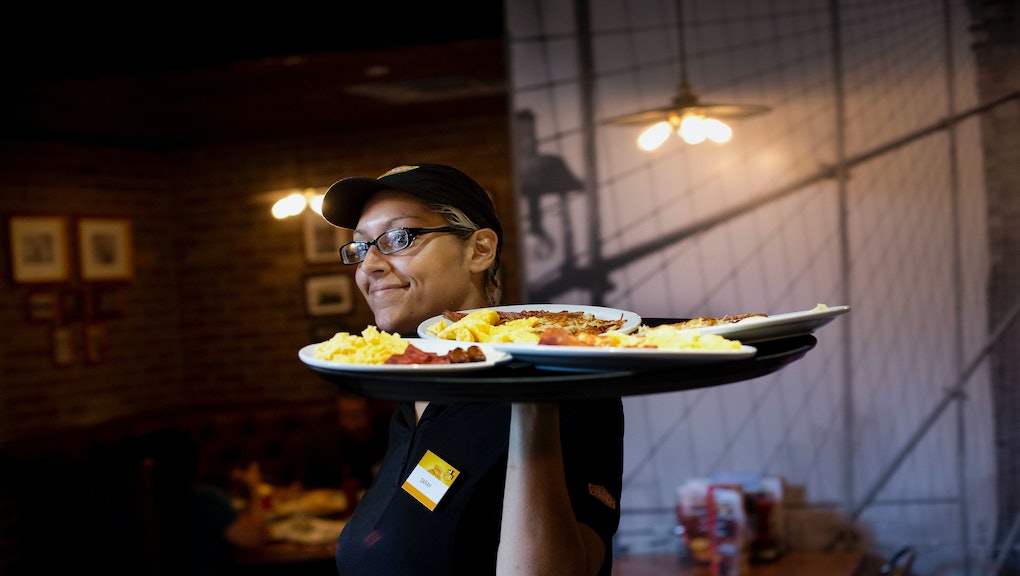 The Case Against Tipping, in 3 Charts

Well, the problem is that people (not you, since you are virtuous and just and lack any biases of any kind, but lots of other people) tend to tip unfairly, which leads to less money in tips for women working service jobs, especially women of color.

A new study from the National Women's Law Center compared states that use the federal minimum wage for tipped workers ($2.13 an hour, which hasn't changed in 23 years) to states where employers must pay workers the higher standard minimum wage before tips.

The result? States that guarantee a standard minimum wage have a 17% smaller wage gap as well as a 33% lower average poverty rate for female tipped workers.

Guaranteeing the standard wage also helps alleviate some racial discrepancies when it comes to pay. African-American women make 60 cents for every dollar that white non-Hispanic men make in states with the $2.13 tipped minimum wage. In the standard minimum wage states, that goes up to 67 cents. The same holds true for Hispanic women, whose wage gap drops from 49 cents to 47 cents in that scenario.

It's not a huge change — there are lots of other barriers standing between women of color and equal pay — but it adds up.

There are currently only seven states that require tipped workers be paid the same wage as non-tipped ones. President Barack Obama pushed a bill that would have increased the federal tipped minimum wage to 70% of the regular minimum wage but, as Mother Jones explains, it was shot down in Congress. More than $2.2 million in lobbying by the restaurant industry may have had a little something to do with that.

While we're waiting for change, take a look at your state's minimum wage for tipped workers. If it's $2.13 an hour, maybe try to be a little less stingy with your server next time you go out for dinner or drinks.