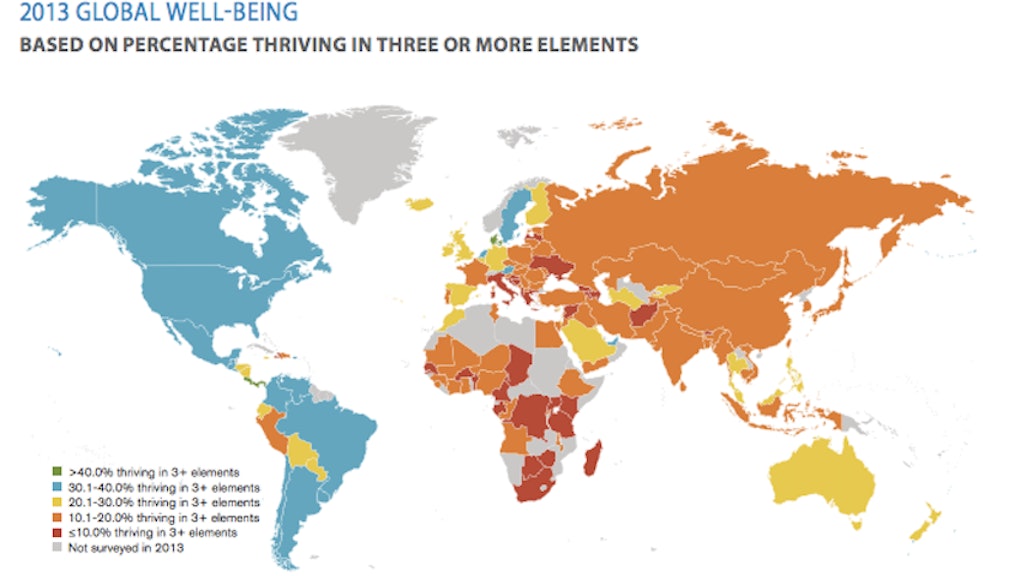 The 10 Surprising Countries That Are Happier Than America

Earlier this year, Gallup and Healthways released their annual report on the State of American Well-Being — and now it's time to take a look at the rest of the world and see who is thriving and who is not.

The new report, titled the State of Global Well-Being, asked 133,000 respondents in 135 countries to rate their lives according to five elements of well-being: purpose, social, financial, community and physical. Based on these responses, Gallup and Healthways generated a map of where people are the happiest — or, at least, perceive themselves as happy.

As you can see in the map below, the Americas and western Europe fared well in the survey, while much of Asia and Africa did not:

The U.S. did not perform all that well, ending up in 12th place. While it ranked high in the purpose and social components, in other areas it "does not stand out. The percentage of American adults who are suffering in physical and community well-being is comparable to global levels," the report found.

Despite low financial security, Panama took the top spot in four categories, ultimately claiming the No. 1 spot overall. Other countries on the list include five from Latin America and three from Europe, signaling strong regional representation.

Similarly, the bottom 10 countries are from regional blocs as well:

Sub-Saharan Africa is strongly represented on this list, and there are two countries each from the Middle East and eastern Europe.

What does this mean? Happiness might be a subjective thing, but it looks like people across the world are struggling to obtain it. Only 17% of respondents were thriving in three or more categories of well-being. While most people were satisfied with their community, purpose was by far the most elusive category, with only 18% of adults liking what they do and being motivated to reach their goals.

So where does this leave countries that want to boost their citizens' happiness? The report recommends a variety of solutions for both public and private entities, such as: having companies lower healthcare costs and focus on employee retention; having governments work closer with nongovernmental organizations and increasing awareness of existing programs; and having insurers focus on more than just physical health.

No matter which paths a country takes, the well-being of its citizens is paramount. Though actual well-being is hard to quantify, perceived well-being is still important in terms of gauging public opinion. And reports such as this can help nations find and fixing areas of society that keep residents down.

This article was originally published on Sep. 17, 2014