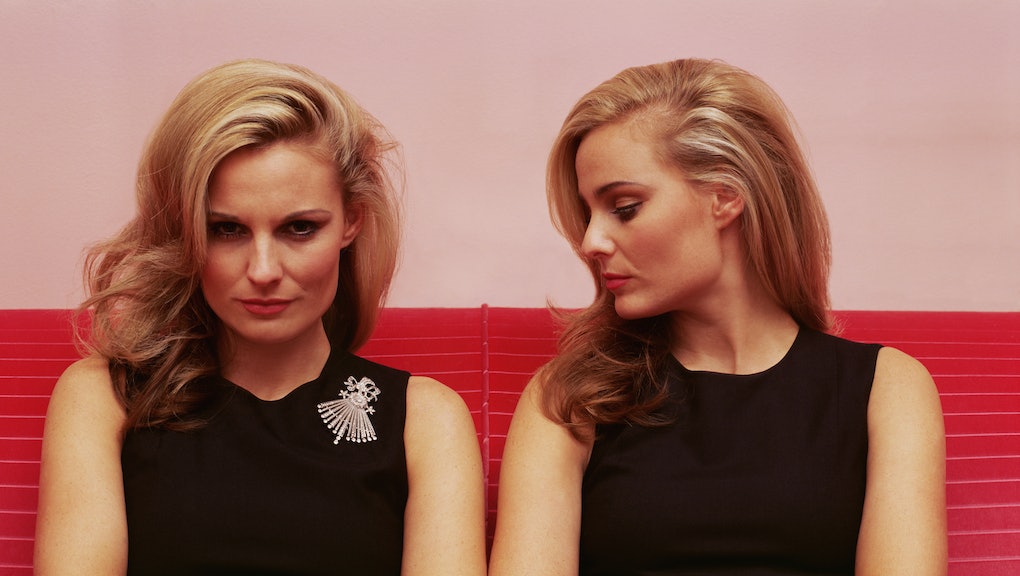 One Thursday morning last March, I woke up to a sudden explosion of Instagram celebrity.

Having fallen asleep the night before as an average college student with a boring Twitter presence and negligible digital footprint, this was not normal. Yet in a single night, I had stockpiled 112 new followers — almost as many as I'd gained in the previous three years.

Puzzled, I squinted at my phone's screen. Did I accidentally post a naked photo or something equally embarrassing? The answer, as I would soon discover, was no. But the more I dug, the more puzzled I became. Not only were these followers brand new, they were also all from Brazil.

As it turned out, they weren't after me. They were after my digital doppelgänger.

Doppelgänger. The word is a direct import from German — doppel meaning "double" and gänger meaning "goer" — referring to a double or apparition. The original concept is rooted in German literature, and first appeared around 1796 in Johann Paul Richter's novel Siebenkäs. Back then, the doppelgänger was a significantly more sinister concept than what it represents today; in folklore, to meet your own doppelgänger was a harbinger of death. Over time, the doppelgänger became popular shorthand for an unexpected double, an acquaintance to whom we bear a uncanny resemblance. Often they look just like celebrities.

In the Internet age, "doppelgänger" has a much looser definition: A digital doppelgänger can refer not only to similar-looking people, but also those with similar names or usernames, or who leave a similar footprint across the vast terrain of the Internet. Unlike in real life, where it's easier to establish who somebody really is, the lines of identity on the Web can be blurred by something as simple as a single keystroke.

Having a digital doppelgänger, particularly when they're famous, can have all sorts of consequences. When your identity gets mixed up on the Internet, you become opened to a wide spectrum of human behavior — the good, the bad and the ugly.

Scenario 1: Your doppelgänger doesn't even know you exist.

By noon on that March Thursday, I was up to 136 new followers. At the end of the night, I had more than 200. Determined to hunt down the source of my new fan club, I scrolled through my Instagram mentions, which would show me all the posts I'd been tagged in. I soon found that I had been mentioned in a photo of a beaming brunette posted by a celebrity gossip account with thousands of followers.

A search for my username turned up the profile of that same woman — a woman whose handle was separated from mine by just one character. Her name was Sophie Charlotte, a Brazilian celebrity famous for her work as a model and for her role on a TV show called Malhação. She also has almost 480,000 followers.

Finally, it clicked: These people thought I was a Brazilian celebrity. Half a world away, the other Sophie and I were connected, and she didn't even know it.

As it turned out, I wasn't alone in this phenomenon, and my experience with my digital doppelgänger was relatively benign. There were others, and each occupied a different space on that spectrum of consequence.

Scenario 2: Your doppelgänger provides a spark of creative inspiration.

In 2009, Daniel Bejar received a fan email from someone who claimed to love his music. He doesn't play music — not professionally, anyway — and was puzzled. After Googling around, he came across Daniel Bejar 2.0, a Canadian musician and lead singer of the band Destroyer.

As it happens, Bejar is a visual artist whose work often explores the philosophical questions around "original" items and their copies. He also has a mischievous streak.

It seemed almost too good to be true: Bejar 2.0 was a relatively famous, similar-looking artist — dark, curly hair, medium height and scruff — with exactly the same name as Bejar 1.0. He was the perfect muse, given Bejar 1.0's interest in copies and originals. Soon after the initial fan email, Bejar 1.0 formulated a plan, and "The Googlegänger" was born.

Bejar 1.0 set out to recreate some of Bejar 2.0's most well-known photographs. He spent a year growing out a head of frizzy hair and letting his beard get long, then posed in exactly the same settings as Bejar 2.0 had. He let his versions loose on the Internet and watched Google do the rest.

"In a juvenile sense, it was kind of like the Internet and the image search [were] our battlegrounds," he told Mic.

Over time, the images of Bejar 1.0 began to replace those of Bejar 2.0. Now, when you type "Daniel Bejar" into Google, you get near-identical photos of both men in roughly equal numbers. "[They] started getting picked up all over the place," Bejar 1.0 said. "People were taking my pictures and putting them in album reviews."

Eventually other people began to take notice. The New Yorker ran a story about the project in 2011 and brought Bejar the artist along to one of Bejar the musician's shows. No in-person meeting happened, however: As Bejar 1.0 explained, "It was about the name, and the space online that we would share online theoretically for the rest of our lives."

Bejar 1.0 was also quick to emphasize the role that the Web had played in his project. "The Internet is instantaneous and exceedingly connected," he told Mic. "You have access to interaction, and you can easily draw connections."

Enter Gerry Sandusky — but not the one who was at the center of the 2012 Penn State child sex abuse scandal after sexually assaulting 10 boys.

This Gerry Sandusky is a sportscaster from Baltimore. He has no relation to Jerry, who's currently serving 30 to 60 years at a maximum security prison in southwest Pennsylvania. Yet that didn't stop him from receiving a torrent of abuse after the scandal broke — so much so that his Twitter profile now reads, "I am Gerry with a G. Baltimore sportscaster. No relation to the former Penn State coach."

"For me it's a little bit like being a banker with the name Bernie Madoff," Sandusky told Mic. "They just see the name and make an instant connection."

"My children, my neighbors — it's affected my career," he said. "I think it's going to be around for a long while."

Though Sandusky encountered in-person abuse — one man came up to him while he was in public with his family and began loudly berating him — most of it was confined to the Internet.

At one point during the onslaught, Gerry received a letter in the mail from a concerned stranger. "I just want to let you know the problem isn't going away," it read.

Scenario 4: Your doppelgänger exposes you to the inner workings of crazed Internet fans.

When New York Times reporter Jonathan Martin began drawing the ire of football fans looking for former Miami Dolphins lineman Jonathan Martin, Gerry Sandusky sent him a similar message. "I have walked where fate has now taken you," he wrote, according to an article Martin published about the experience in November 2013.

The Dolphins' Martin had left the team a few weeks earlier after a bullying incident with teammates, and Miami fans were not pleased. They went after the New York Times' Martin with a vengeance, mistaking him for his digital doppelgänger and hurling all kinds of insults his way.

Despite the brouhaha, the New York Times' Martin remained largely philosophical about the affair.

"The misunderstanding has lost some of its charm, [and] has also been a reminder about how ugly discourse can be on the Internet," he wrote at the time. "But I do not want to turn this into some tut-tutting riff on our ever-coarsening society. As an avid sports fan, I found it pretty neat ... There are worse people to share a name with than a Stanford-educated former all-American who was taken in the second round of the NFL draft."

What do these digital doppelgängers tell us about "identity" on the Internet? In some ways, we can carefully curate our online persona by picking and choosing what others know about us. But paradoxically, just like we can craft our own digital self portraits, others can use the ease of the Web to do the same thing — hence the power of the Web to decide who we are.

"It's made so many more commonplace parts of life feel a lot more fraught than they used to be," Lee Rainie, the director of Internet, science and technology research at Pew Research Center, told Mic.

Part of this stems from the nature of the beast. Above all, the Web acts as a megaphone for typical and long-held human behavior. It's similar to what would happen if you put 50 people in a locked room and left them there for a week. Closeness and speed breed intensity, which is exactly what happens to dealings on the Web.

The phenomenon of the digital doppelgänger lets us see that spectrum more clearly than perhaps anything else. "People can get swept up without even knowing it," he said. "You wake up in a pretty different reality than you fell asleep in."

"The Web acts as a megaphone for typical and long-held human behavior."

My Brazilian fan base is still going strong. About three-fourths of my 640 Instagram followers think I'm somebody else entirely. They like my photos — mostly the ones of New York City, but sometimes the ones of my nephew or my friends — and some leave comments in Portuguese I can't understand. Every so often, after my handle gets posted along with a new photo of Sophie Charlotte, my phone will light up with dozens of new follower notifications.

As for my doppelgänger? It looks like she recently got a haircut (so did I), and I can see photos of her with a man who might be her boyfriend. She makes for great conversation at parties or on dates, where I can laughingly shake my head and explain how I became mixed up with a 5-foot-7-inch German-born, Brazilian-bred brunette.

I sometimes wonder whether someone looking for my profile will accidentally stumble upon hers. Then I remember that she's the star here, and I'm just along for the ride.

But if you are reading, @sophiecharlotte1, please do drop me a line. I'd love to meet the woman everyone thinks I am.