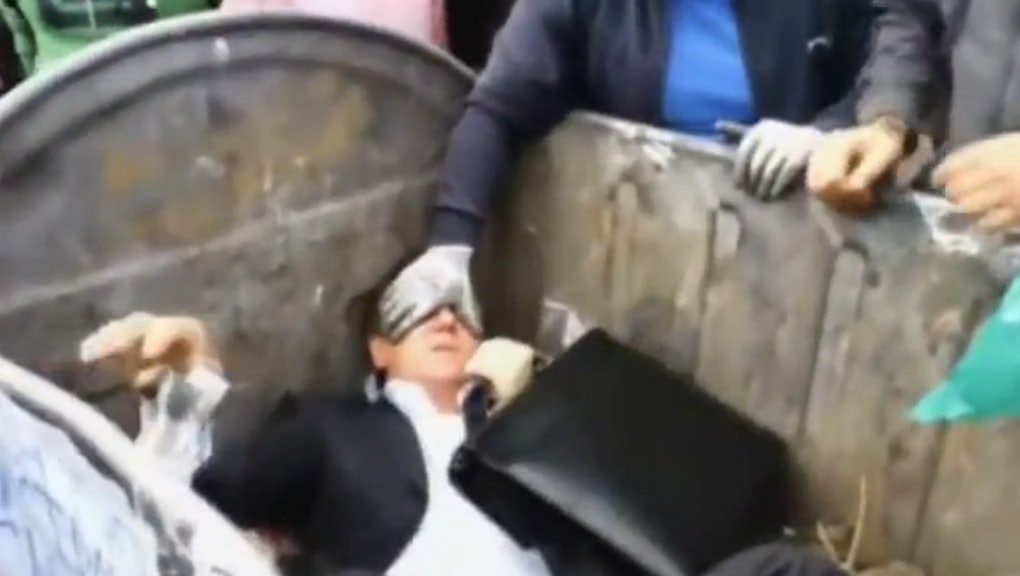 Ukrainians Literally Just Threw One of Their Politicians Into the Garbage

The news: This gives a whole new meaning to the phrase "throw the bums out."

A recently released video shows Ukrainian politician Vitaly Zhuravsky being thrown in a dumpster near the Ukrainian parliament  by a group of angry citizens. After forcibly pushing Zhuravsky into the dumpster, the mob held him down and bombarded him with water and a loose tire.

"We live in a country where blood flows because of you," shouted on protester, Reuters reported.

The context: Zhuravsky was a former member of former President Viktor Yanukovych's political party. While the exact motivations around his unceremonious disposal remain unclear, the Washington Post notes that "some reports suggest he was targeted because of his role in the passage of a bill in January that restricted freedom of speech." Zhuravsky said he believes the stunt was orchestrated by his opponents in the upcoming October elections.

The involuntary dumpster dive happened right before a parliamentary session where members reached an agreement with the European Union, bolstering their relationship and loosening Ukraine's grip on separatist-held regions. The session erupted in cheers and a rendition of the national anthem afterward.

In 2013, then-President Yanukovych scratched a similar agreement, which led to intense protests and his eventual ousting by parliament in February 2014.