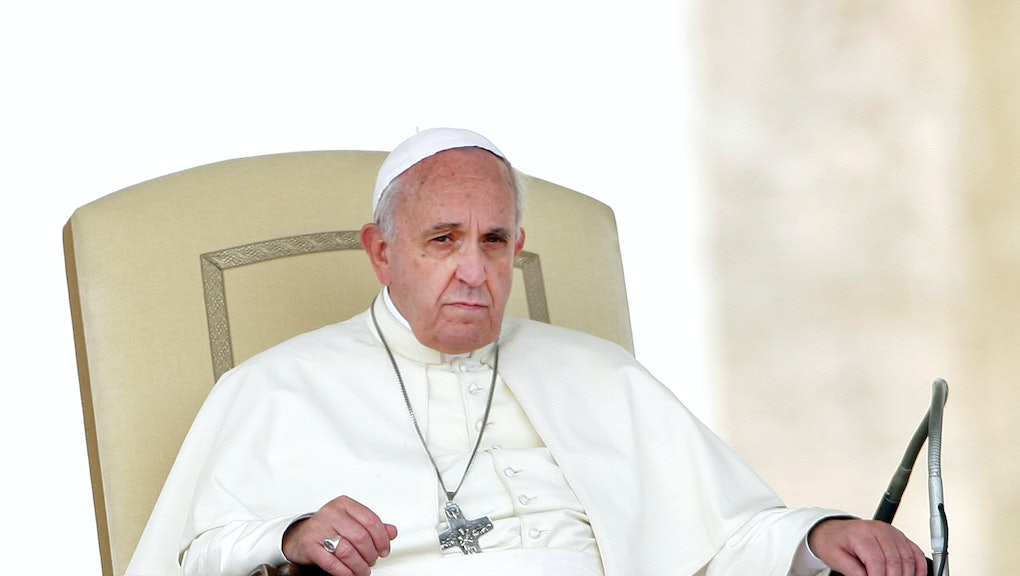 Police Have Uncovered Cocaine and Marijuana Hidden in a Vatican Car

French police performing a routine search of a Vatican car found something more than a little unexpected: four kilos of cocaine and a significant amount of marijuana.

The good news (for the Vatican, at least) is that the perpetrator does not appear to be Argentinian cardinal Jorge Mejia, who owns the car. Police arrested a pair of Italian men who were reportedly tasked with taking the car to a garage for servicing.

What happened? According to French radio station RTL, the two men figured they had a perfect vehicle for transporting drugs, assuming that the car's Vatican diplomatic plates would protect them from police searches. They allegedly drove to Spain, loaded it up with drugs, then started their trip back to France.

The pair were stopped in Chambéry, near the border of France, Italy and Switzerland, as part of a standard customs sweep.

While the Vatican has confirmed that the car was stopped and that police found drugs, officials have stressed to media that there was no official Vatican involvement in the alleged crime. Cardinal Mejia is 91 years old and bedridden after a heart attack, so it seems highly unlikely that he'd be masterminding an international drug smuggling operation.

Vatican rules: Recreational drug use, of course, is frowned upon by the Catholic establishment. Pope Francis has called it a "scourge," responding to legalization efforts and proposed medical uses by saying, "With evil, there can be no yielding or compromise."

This isn't the first time the Vatican has found itself caught up in a drug crime, though. Earlier this year, according to the Associated Press, German customs officials intercepted a shipment of 340 grams of cocaine being sent from South America to Vatican City. The kicker? The coke was hidden in 14 condoms.

While the traffickers were never caught, the drugs were addressed to the Vatican post office and not anyone specific, according to the Associated Press. That means the recipient could be any one of the city's 800 residents — or someone was playing a particularly high-stakes practical joke.