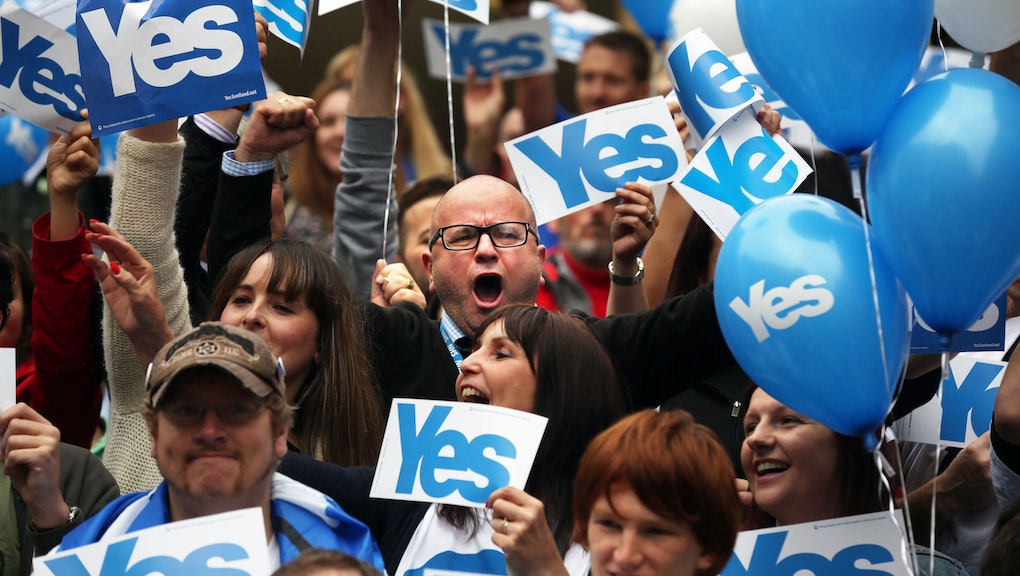 Scotland May Declare Independence from Britain — Here's What Will Happen Next

The news: On Thursday, Scots will decide whether or not their country will secede from the United Kingdom. The three latest polls show support for independence at about 48% and those backing the union at about 52%. The referendum jeopardizes the 307-year-old kingdom ruled over by Queen Elizabeth II that is comprised of Great Britain, Scotland, Ireland and Wales.

If the pro-independence movement comes out on top, Scotland will gain its official independence by March 2016 for its 5.3 million citizens. Not everything would change, of course: Scottish National Party leader Alex Salmond says that he would keep Queen Elizabeth II as the Queen of Scots. But a victory for independence in Scotland would have massive ramifications in both the United Kingdom and around the world.

Here's a rundown of some of the ripple effects a "yes" vote could have:

Oil: One of the primary reasons Scotland is seeking independence from the UK is because a large amount of oil and natural gas that goes into Britain comes from waters off Scottish shores, according to the New York Times. "It's Scotland's oil" was the rallying cry of the Scottish National Party in the 1970s and helped plant the political seeds for today's movement.

But the $8 billion in oil revenue from Scotland's North Shore stockpiles that currently goes into British pockets would only be about 3% of Scotland's economy, which is small potatoes. Still, the oil and gas industry provides employment for 225,000 Scots, even as the production volume is declining. Currently, the oil and gas industry "opposes the independence movement and might think twice before making the billions of dollars of investments required to bring that oil and gas to the surface," theTimes notes.

Banks: A "yes" vote would isolate the two largest British banks, Lloyds Banking Group and the Royal Bank of Scotland. Both banks said that if the referendum was passed, they would move their headquarters out of Scotland and into England.

Despite this prediction, the independence referendum "has done little to dent the confidence built up across Britain's financial markets in the past five years," according to Bloomberg News.

Across the pond, the U.S. is closely following the vote. "We think a strong, united UK is important, as the UK has been one of our best and most reliable partners for a very long time," Treasury Secretary Jack Lew said on Wednesday.

Union Jack: The UK flag combines the crosses from England, Ireland, and Scotland's flags. (Wales wasn't included since it didn't become part of England until 1801.) There is no guarantee that this would happen, but the New Yorker suggests that "if Scotland votes to remove itself from the United Kingdom, the white St. Andrew's cross and its blue background should be removed from the Union Jack, leaving just the red St. George's Cross, of England, and the red St. Patrick's Saltire, of Ireland."

Scotch: As the country's second biggest export after oil, Scotch has brought in $7 billion in revenue in the past 10 years. The newly minted country would have to reapply and finalize agreements with the European Union, particularly in terms of the 27 countries that get duty-free booze.

India, which is the largest consumer of Scotch whiskey and spent roughly $114 million on the drink in 2013, is worried that a "yes" vote and Scottish independence will cause prices to rise dramatically. Currently, there is no evidence to support this claim.

The takeaway: The consequence of Scotland's vote on Thursday goes far and beyond just the oil industry, the UK's flag or whether a Scottish soccer team could sprout up in time for the 2016 World Cup. The Sept. 18 decision could set a precedent and trigger dynamic world-changing shifts like a "British withdrawal from the E.U," reported NBC.

In any case, the measure is about to be decided by the divided Scots, and only they know the outcome. If the country votes for the "yes" campaign, the impact will trickle and spread, certainly changing the world as we know it.