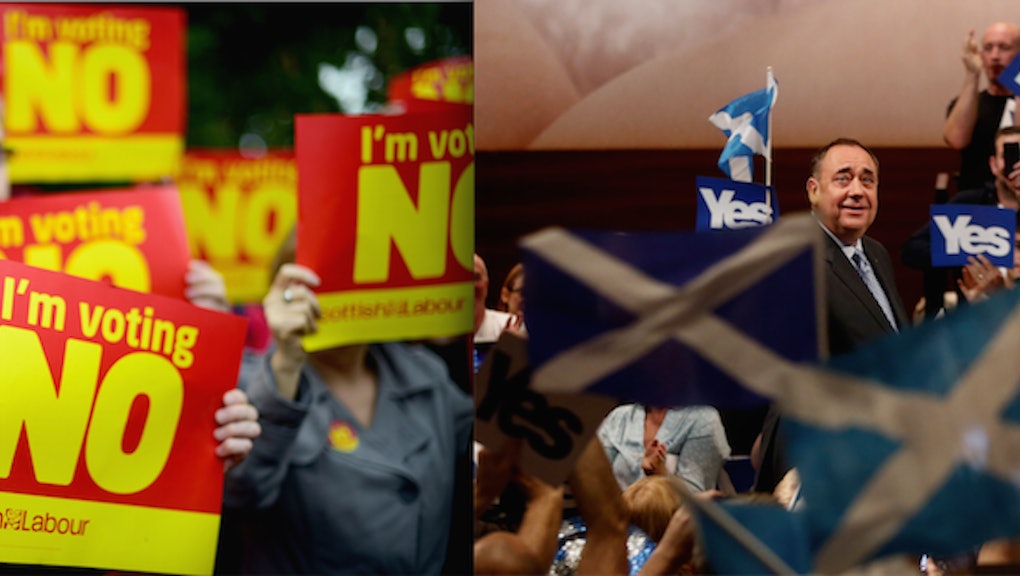 Don't Care About Scotland's Vote on Independence? Here Are 7 Reasons All Americans Should

Scotland and England were first bound together in 1707, when, after centuries of war, the two nations were united in an Acts of Union.

Not everyone was pleased. Especially Scottish nationalists. "The Scots deserve no pity," the politician Andrew Fletcher wrote in 1706. And yet, the United Kingdom has held strong. Until now.

On Thursday, voters in Scotland will take to the polls to answer a straightforward yes-or-no question: "Should Scotland be an independent country?" If the answer is no, the United Kingdom holds. If the answer is yes, a 307-year-old union will break apart, and Britain will be torn asunder.

For a while, it seemed like a No victory was a done deal. But last Sunday, a poll by YouGov put the Yes side in the lead for the first time.

The decision could lead to amazing changes or devastating consequences — or maybe a bit of both.

1. You might have to pay more for that whiskey drink.

Some experts warn that independence could raise the price of Scotch whisky, which Scotland's second biggest export behind oil and gas.

An independent Scotland would be cast out of the European Union and lose out on European markets for at least a few years. Sales would drop and costs (perhaps even barley costs) would rise, all of which would drive up prices.

The Scotch Whisky Association warns, "The implications [of the referendum] are huge."

2. Regions all over the could start fighting for independence.

Specifically Catalonia, a region in northern Spain, where residents say they will hold their own referendum on independence on Nov. 9 with the goal of breaking off from Madrid.

Last week, Catalan residents held a massive pro-independence rally in Barcelona. Hundreds of thousands of Catalan residents showed up to form a 7-mile-long "V" for vote (votar) or victory (victoria). But Spain says it ain't happening. On Tuesday, the Spanish government said it would use "the full force of the law" to block the vote — which, in any case, would be nonbinding.

The final weeks leading up to the vote have brought signs of market panic in Britain.

The Royal Bank of Scotland has already indicated that it would move to England if independence wins out. A big chunk of Edinburgh's financial services are expected to follow. Already, shares in Scottish firms have taken a hit on the stock market. Scottish companies are busy making contingency plans and hedging against potential currency swings and mass capital flight. On Monday, the British pound fell 1.3% to its lowest value against the dollar in over a year.

Some predict that an independence vote could destabilize larger markets and result in significant earnings loss.

4. It could mark the end of nuclear weapons.

Britain's supply of Trident nuclear weapons is currently held at Her Majesty's Naval Base Clyde, in Faslane, near Glasgow. If Scotland goes, England will need to reposition its nuclear submarine fleet. This could be pricy and logistically complicated.

Could it also be dangerous? According to former British Prime Minister Sir John Major, Britain's nuclear capacity would be "effectively wrecked" by the move, since it would take "many, many years" to find a replacement port.

5. It could mark the beginning of the end of income inequality.

In some circles, the Scottish referendum is being hailed as the "world's first vote on economic inequality."

Class is certainly not the only indicator of Yes/No allegiance, but it is an important one. In general, lower-income Scots are far more likely to back independence than high earners. Low earners are more hostile to the conservative government in London. Scotland, unlike England, boasts free university tuition, free personal aid for the elderly and a wholly public health care system.

Independence campaigns in other places, from Quebec to East Ukraine, tend to be based on more fixed identifiers, like religion, race and language. Might Scottish independence provide new ammunition to would-be separatists far and wide?

6. Sixteen-years-olds will have the rare chance to vote.

Teenagers now hold key roles on both sides of the campaign, but the rise of the 16-year-old politico has not been straightforward. Last summer, the pro-Union campaign announced that it would send "teacher resource packs" into schools, which would include referendum-themed lesson plans. In return, the pro-Independence side accused opponents of "seeking to influence schoolchildren." (Before long, independence campaigners had created their own "independence packs" for schools.)

But according to some data, 16 and 17-year-old voters are actually more likely to vote No.

The narrow margin between Yes and No has some Scots worried that this referendum won't be the final word. They warn of a "neverendum referendum." (To be fair, the Yes side promises that this is a once-in-a-generation event.)