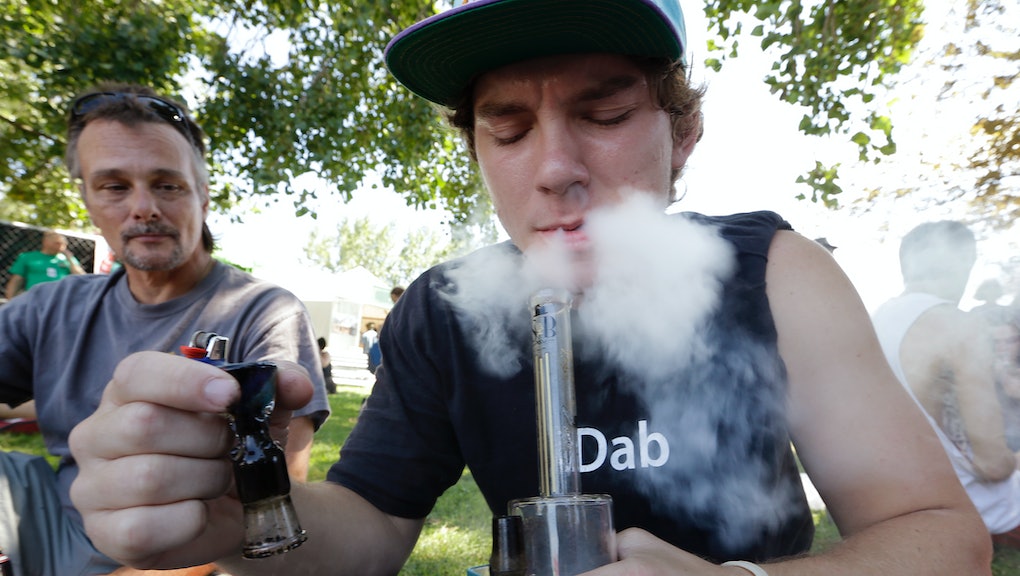 New data from the Department of Health and Human Services released on Tuesday indicates that teens are drinking, smoking and getting high even less these days.

The Washington Post's Christopher Ingraham has a full rundown of the new numbers at Wonkblog, but here's a quick explanation of what the new data says.

Overall, frequent usage rates of alcohol among 12- to 17-year-olds fell from 17.6% to 11.6% over the 2002-2013 period. Marijuana use continues to slope downward. It remains far less abused than alcohol with just 7.1% of teens reporting regular use, down from 8.2% in 2002. Painkillers, cocaine and even tobacco use are on the decline as well.

This is good news: Most medical evidence suggests that teenagers who regularly use drugs or engage in substance abuse end up experiencing worse outcomes in everything from school graduation rates to their brain's white matter development.

Teens, despite sharing other Americans' increasingly liberal perceptions of marijuana use, are somehow avoiding turning into young Cheech and Chongs:

Ingraham proposes a number of contributing factors, like successful anti-tobacco campaigns suppressing teen marijuana use rates. Vox's German Lopez adds that innovative new anti-drug campaigns that focus on education, prevention and treatment rather than enforcement are backed by scientific evidence:

Previous studies found education campaigns like Be Under Your Own Influence and ONDCP's Above the Influence led to a dip in alcohol, tobacco, and marijuana use among teens. And places that obtained Drug-Free Communities Program grants also reported a decrease in some drug use, particularly alcohol and tobacco.

But Newsweek points out that teens are actually receiving fewer anti-drug messages in both school and outside it, meaning that the ultimate reasons teens are getting wrecked less often remains somewhat unclear. A better guess might be that young Americans obtain more medically accurate information about various drugs and adopt more relaxed positions on them, they're also making smarter, more responsible decisions about their own drug use.

Whatever the explanation, one thing is clear: Liberal attitudes toward drugs have not resulted in skyrocketing rates of use among minors. In Colorado, the crime rate was 3% lower over the first six months of legalization compared to a year prior, and teen use has so far appeared to decrease. In fact, today's teens are probably the best behaved generation on record.

As public attitudes toward drugs (and marijuana in particular) continue to move away from fear and misunderstanding, more Americans are going to realize the War on Drugs' reactionary defenders of the country's moral fiber are, well, full of it. The kids, as it turns out, will be alright.