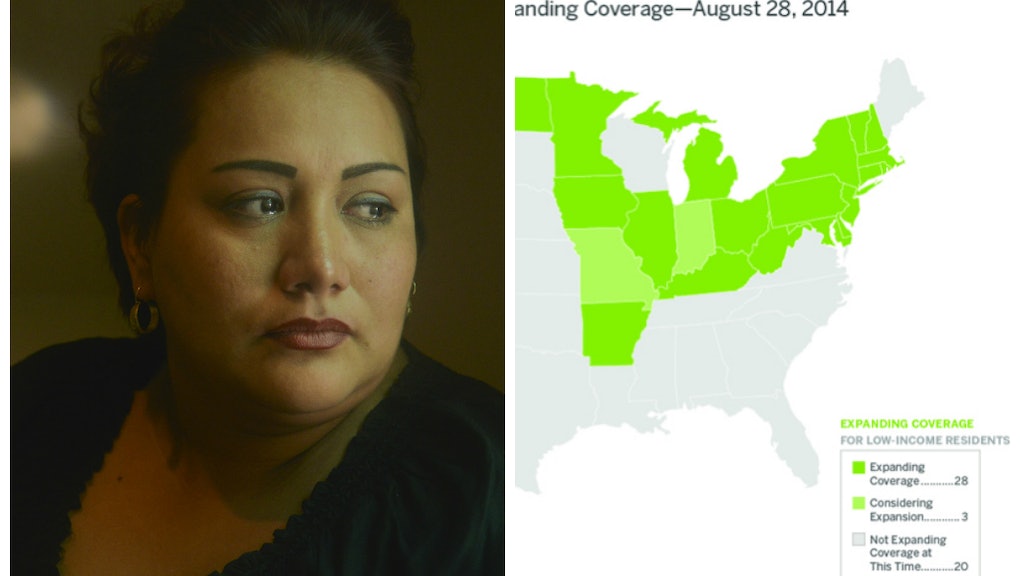 Photo Composite by Zak Cheney-Rice, using images from Getty Images and The Advisory Board Company.

America, we have a problem: You don't need a medical degree to realize how badly the U.S. government is failing when it comes to women's health.

Just this year we've suffered huge setbacks in access to key services and resources, from the Supreme Court's disastrous Hobby Lobby decision to its elimination of "buffer zones" at abortion clinics.

But we're overlooking a key part of the story: These trends disproportionately affect women of color. For every step backwards in the fight for health care access, a confluence of poverty, geography and racial discrimination ensures that black, Latina, Asian and Native American women fall even further behind their white peers.

It gets worse: The crisis is so bad that the United Nations has been put on notice.

According to Colorlines, a report published by the Center for Reproductive Rights in August makes a "compelling case" that medical access and outcomes for these women are in direct violation of the International Convention on the Elimination of All Forms of Racial Discrimination (ICERD). It's a damning indictment of the world's largest economy, and a nation that purports to be one of the most racially tolerant on the planet.

"Post-racial" America: Yet despite all evidence to the contrary, we keep falling back on fervent insistences of equality, inevitably followed by an avalanche of facts that prove it's just a fantasy.

Here are 13 figures that illustrate how bad health care access for women of color in our country really is.

Colorlines reports that the United States jumped from a rate of 12 maternal deaths per 100,000 live births to 28 per 100,000 — all in the span of 23 years. That's twice the rate of Saudi Arabia, and three times that of the United Kingdom. The primary reason cited is a lack of access to quality insurance and adequate medical resources.

3-4. The number of times higher the national maternal mortality rate is for black women than white women. This figure has held relatively steady for the past 40 years, according to the CRR report.

94. The number of black maternal deaths per 100,000 live births in Fulton County, Ga., which includes the city of Atlanta. That's more than three times the national average. The rate for white women in the same county is "essentially zero," according to Colorlines, i.e., "too insignificant to report."

77%. How much higher the maternal mortality rate is in states with higher populations of people living below the poverty line, when compared to states with smaller impoverished populations, according to Colorlines (citing a 2010 Amnesty International report).

Low-income populations in the U.S. are disproportionately made up of black, Latina and Native American women. The report claims these disparities are especially apparent in Southern states with high black and Latino populations, namely parts of Georgia, Mississippi and Texas.

1. The number of clinics in the state of Mississippi that provide abortions. Mississippi's population is 37.4% black and nearly 25% poor — significantly higher than the national average for both categories.

19. The number of states (including almost all in the South) that have opted out of Medicaid under the Affordable Care Act. Needless to say, this is disturbing: Expanding Medicaid would allow for unprecedented access to affordable contraception for low-income women, and women of color in particular.

This is important for one key reason: Contraception is not only a vital component of effective family planning, but according to some, a proven means of combating poverty.

72%. The percent decrease in women receiving health care services in Texas' Rio Grande Valley over the past few years, Colorlines reports. The region has recently become "ground zero" for America's ongoing debate around treatment of immigrants without documents for the U.S., originating primarily in Mexico and Central America.

70%. How much greater the likelihood that an immigrant woman of reproductive age will lack health insurance, as compared to her U.S.-born peers. This figure has a clear racial bent: Most immigrants to the U.S. come from either Mexico or Asia.

5. The number of years immigrants must wait before they're eligible for Medicaid under federal law. Texas, home to the nation's second largest Latino population, makes them wait even longer, according to Colorlines.

1 in 3. How many Native American women will be sexually assaulted or raped in their lifetime, according to the Center for American Progress. That's 3.5 times higher than any other racial group. An added problem here is that federally funded health care facilities on reservations — where about 30% of Native Americans live — lack the capacity to treat and care for victims: CAP reports that women often must travel hundreds of miles just to receive a rape kit and STI screening.

66%. The percentage of new female HIV cases nationwide which black women comprise. Forbes reports that HIV/AIDS is now the leading cause of death among black women age 25-34.

4.3. The cervical cancer death rate per 100,000 among black women nationwide — twice the rate for white women. The difference is so stark it has attracted the attention of researchers, who examined the disparity by focusing on the state of Maryland and published their findings in PLOS ONE health journal.

Among their troubling discoveries: Between 1999 and 2008, black women were far more likely to receive radiation or chemotherapy as their only form of treatment, regardless of their stage of cancer. White women, on the other hand, were significantly more likely to receive "multi-modality treatment," incorporating surgery, chemo and radiation, and resulting in higher survival rates.

Researchers concluded the disparity is rooted in a few key factors. One is the lack of health care access for black women; the other is a deliberately discriminatory approach to treatment from medical practitioners.

The takeaway: The next time someone tells you we have a functioning and equitable health care system in America, show them these numbers. Any nation that claims medical equality but allows factors like race and gender, compounded by corresponding issues like poverty, politics and legal access, to prevent specific groups of people from healing is nothing short of hypocritical.