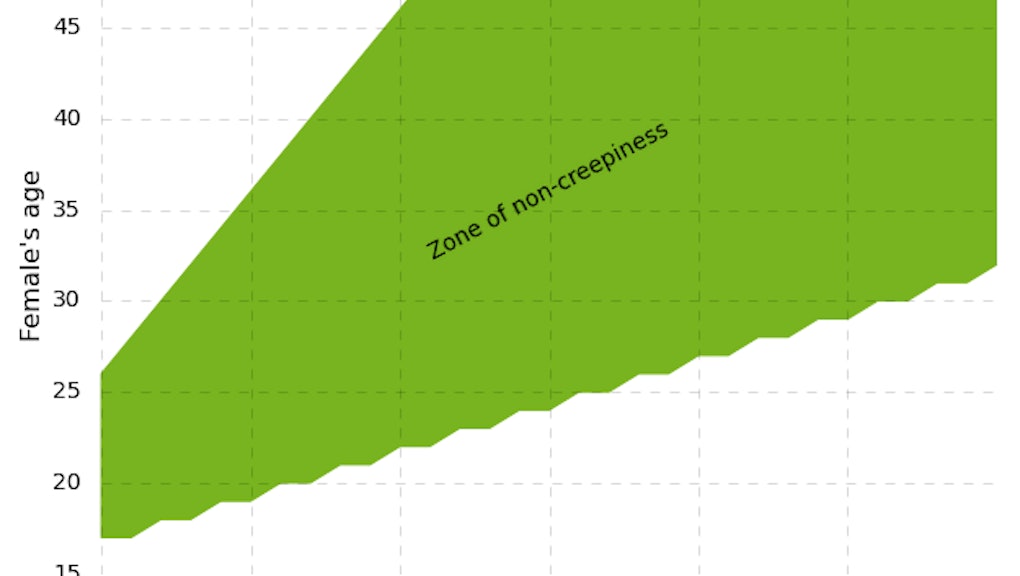 When It's OK to Date Someone Younger Than You, in Two Charts

The news: We've all heard of the half-plus-seven rule: Divide your age by half and add seven years to get the minimum acceptable age for your romantic partner. Going by the popular formula, 30-year-olds should not be with anyone younger than 22, 40-year-olds should go for people who are at least 27, and so on. But how many people follow this rule?

Well, now we have at least one important source for this data: OkCupid founder Christian Rudder, who recently published his book Dataclysm based on the dating website's big-data experiments. In addition to releasing analysis of online daters' racial preferences, Rudder has also revealed the average age ranges that men set when they are searching for women — and the result is pretty enlightening.

First, here is a graph of the acceptable dating range for each age using the half-plus-seven rule, illustrated by data blogger Randal Olson:

Now here is the graph again, but this time with the average age range set by men on OkCupid:

The biggest takeaway from this graph is that, for the most part, OkCupid men stay just barely within the range prescribed by the half-plus-seven rule. Around their mid-30s, their search preferences include women in their 20s below the age minimum, but by the time they hit 40, these men are back to staying firmly within the acceptable range.

What does this mean? Obviously, the so-called "zone of non-creepiness" is not a hard-and-fast rule; when you are adults of consenting age, no one's going to punish you for violating this arbitrary guideline.

Still, it's worth noting that at every age level, "men aren't even close to reaching the upper bound of the zone of non-creepiness," as Olson points out. "According to the Standard Creepiness Rule, it'd be perfectly fine for a 30-year-old man to date a 45-year-old woman, but apparently 30-year-old men are already struggling with the idea of dating a 37-year-old," he writes.

Of course, it's hard to tell from these graphs how serious of a relationship these men are looking for. According to previous research, men are more likely to broach the "zone of non-creepiness" for casual flings and sexual fantasies, but they actually look for women who are older than the minimum set by the half-plus-seven rule when they are thinking of marriage and serious relationships.

As with all things, the half-plus-seven rule is better used as a rule of thumb than a strict law. But even so, if you keep skirting the accepted minimum, you might consider widening the pool to older potential partners. And if you have trouble with basic arithmetic, here is a handy calculator to figure it out for you.