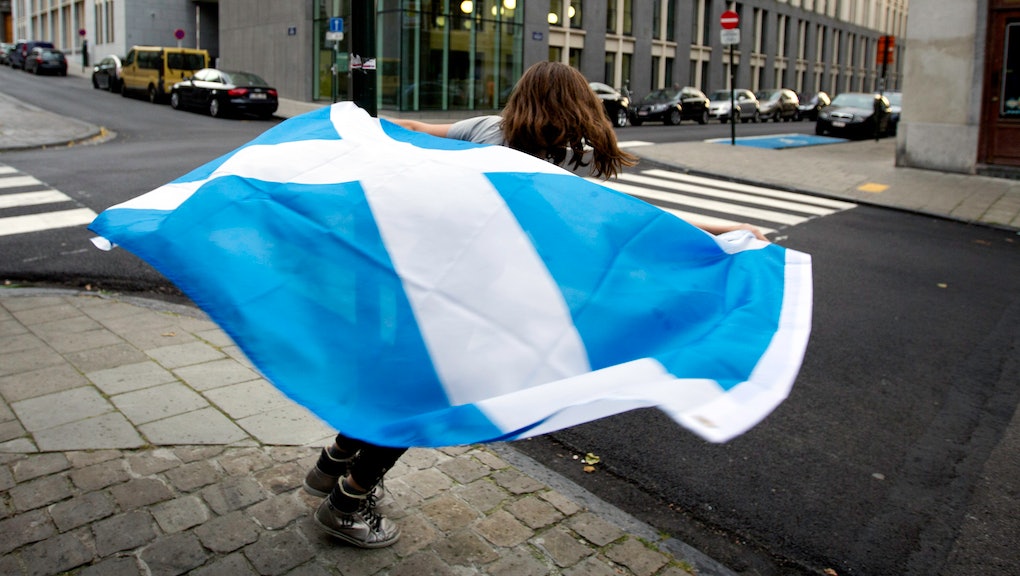 With more than 60% of the vote counted on Thursday night, Reuters calculations based on the partial results showed Scottish support for staying in the UK.

As initial projections rolled in, Scottish National Party politician Nicola Sturgeon told the BBC the outcome “is a clear disappointment” if the forecasts were correct.

Despite the loss, the "Yes" campaign scored "a handful of notable successes," the Guardian notes, succeeding in the largest city of Glasgow by 53% to 47%, winning 54% in West Dunbartonshire and a convincing 57% win in Dundee.

I call on all of Scotland to follow suit in accepting the democratic will of the people of Scotland.

Salmond ended his speech with a call for unity following the vote: "We shall go forward as one nation."

Tension over independence has roiled Scottish families in the weeks leading up to the vote.

The debate over Scotland's relationship with England is far from over. As Vox notes, a "No" vote "doesn't mean that the status quo is going to prevail":

As Vox's Matt Yglesias explained here, devolution is already a point of contention in UK politics, because England doesn't have its own parliament, while Scotland, Wales, and Northern Ireland do. English policy is set by the UK-wide parliament at Westminster. That means that Scottish MPs get to vote on matters of English policy, but English MPs don't get to vote on matters that have been devolved to Scotland. (This debate is known as the West Lothian question — named after an area of Scotland.)That system is generally seen as benefiting the Labour party. Unsurprisingly, that makes it particularly unpopular with the Conservatives. Already, some Conservative MPs have said that they would demand that the West Lothian question be resolved before further devolution is granted. David Nuttall, MP for Bury North, which is near Manchester in the North of England, told the Financial Times, "You cannot have devolution and then say Scottish MPs will still be voting on matters that do not affect Scotland. We will need to draw up new rules on this as part of the settlement. There is a group of us that will push for that."

Hold on to your butts: The Scottish saga is far from over.