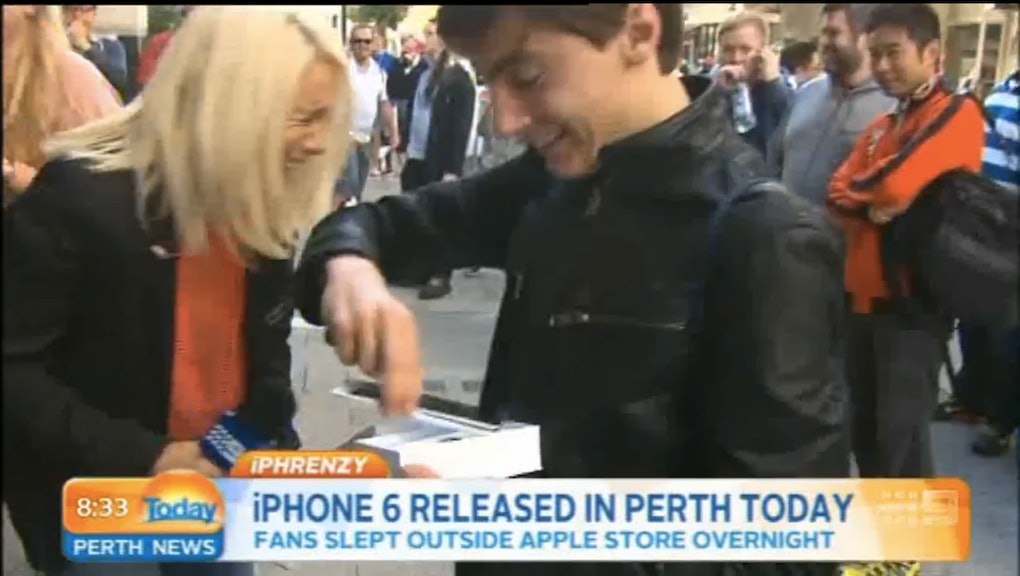 Imagine this: You're the very first customer in your neck of the woods to get a shiny new iPhone 6, Apple's latest must-have device. After waiting in line for hours, braving ravenous crowds and spending all that money, you finally get your hands on the glorious piece of technology.

And then, on live television, in front of your family and friends, you drop it.

Such is the sad story of Jack Cooksey, the first one inside the Apple store in Perth, Australia, Friday to purchase the iPhone 6. After waiting in line through the night, Jack was being interviewed by the Today show when the incident occurred. This is truly what nightmares are made of.

Mashable reports that — thankfully — the poor chap's phone survived the fall. He seemed to recognize that his misfortune would become fodder for the Internet: "As soon as I knew I'd dropped it I thought someone was going to make a meme or something out of this but I didn't expect it to go as big as it's gone I mean, it's in the U.K. now," he said.

Somehow, iPhone fever never seems to break, despite the fact that every new product release yields the same depressing scene. People have been lining up for weeks in countries around the world to be the first to grab the new iPhone. The scene in Australia has been especially chaotic: Police in a Sydney suburb were even called to break up a fight in a line.

Be careful, folks. It's a jungle out there.