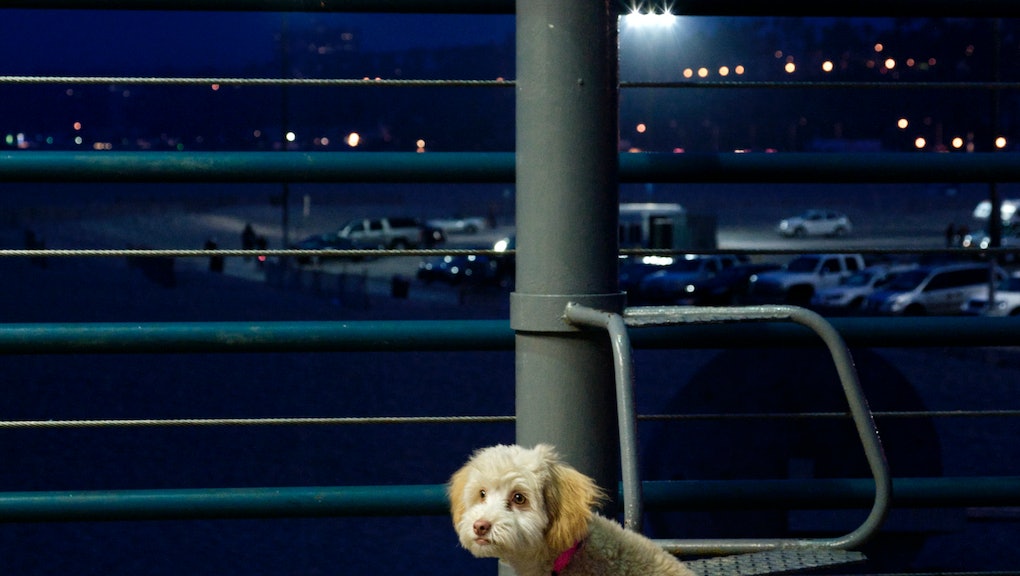 Scientists Discover One Fascinating Way Our Dogs Are Just Like Us

Has your dog fallen on ruff times? A new study published in PLOS One suggests that dogs' personalities include traits humans usually like to reserve for themselves, like optimism or pessimism.

The research: The University of Sydney's Melissa Starling, a veterinary scientist, sought to figure out whether canines had specific outlooks on life. She taught a group of dogs to associate two distinct tones with a delicious bowl of milk or boring ol' water. The dogs were trained to touch a target after hearing the tone before they would be rewarded with either the tasty treat or just plain H20.

After the dogs had become accustomed to this system, Starling played "ambiguous" tones that were in between the two previous sounds. Where the previous system was simple and predictable to dogs, this one was a little more vexing. Sometimes the dogs would be pretty sure the in-between noise was indicative of a treat, while other times it was too mixed-up to tell. The subjects that continued to approach the target even after it became clear that it might not result in reward were labeled optimist, while the ones that gave up were labeled pessimists.

The science: Starling actually measured the dog's judgment bias, or a disposition to evaluate a certain situation in a particularly positive or negative light. Starling's research demonstrates that a judgment bias exists in dogs and has a strong, measurable impact on their actions.

Fortunately, most dogs seem to be positive thinkers.

"Of the dogs we tested we found more were optimistic than pessimistic, but it is too early to say if that is true of the general dog population," Starling said in a press release. "Pessimistic dogs appeared to be much more stressed by failing a task than optimistic dogs. They would whine and pace and avoid repeating the task while the optimistic dogs would appear unfazed and continue."

Eventually, the research could help build something like a personality test for canines, which could help trainers place working canines in the appropriate roles, like rescue or seeing-eye dogs. Versions of the test could also one day help dog owners understand their best friend's personality a little better.

"This research could help working dog trainers select dogs best suited to working roles. If we knew how optimistic or pessimistic the best candidates for a working role are, we could test dogs' optimism early and identify good candidates for training for that role," Starling said. "A pessimistic dog that avoids risks would be better as a guide dog while an optimistic, persistent dog would be more suited to detecting drugs or explosives."

The University of Colorado's Marc Bekoff told the Washington Post that he had a different perspective: perhaps the so-called pessimistic dogs are actually just, well, realists.

"The paradigm of the study is great — most dog studies use 10 dogs or so, and this has 40 dogs of all different breeds and ages. And it's possible that these dogs were pessimists — but maybe they just gave up," Bekoff said. "It's perfectly legitimate to say that there are optimistic and pessimistic dogs — and that you can change their behavior."