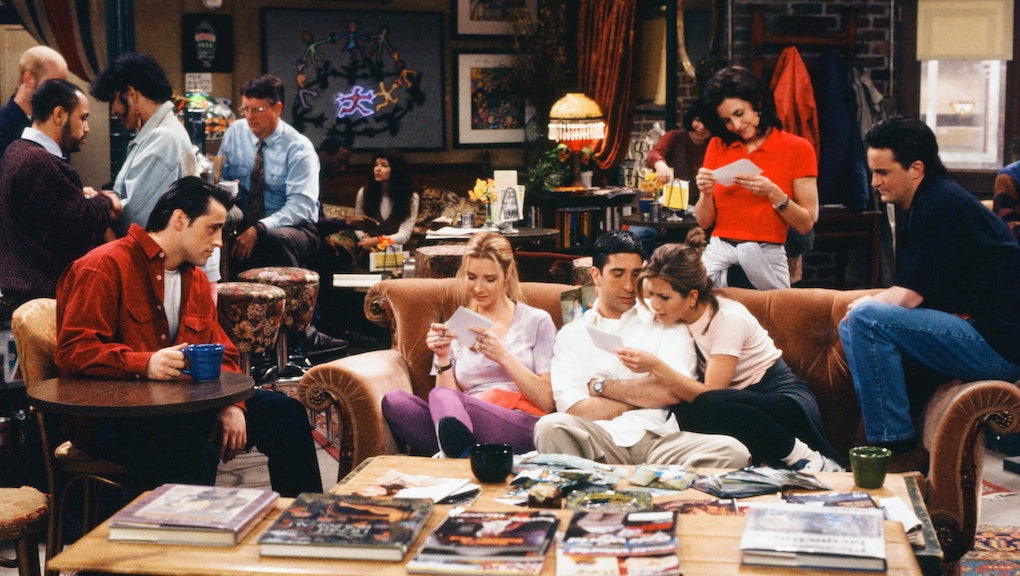 12 Ways 'Friends' Got Life as a 20-Something Exactly Right

Sept. 22 will mark the 20th anniversary of Friends, quite possibly the best sitcom ever about a group of single 20-somethings trying to make it in the big city. Apart from being just a damn good show, hitting all the right comedic and emotional notes and being filled with enough zingy, fast-paced one-liners to put a Gilmore girl to shame, Friends paved the way for countless like-minded shows to follow suit.

Friends set the golden standard for TV shows about 20-somethings struggling to figure it all out: love, career, self, life in general. What's more, despite having aired, we repeat, 20 years ago, all the points it made about being a 20-something still ring completely true to this day. Friends got the 20-something life just right. Here's how.

1. Being poor and single can make you happier than being rich and married to the wrong person.

Rachel had it made, at least on paper. She was going to marry Barry Farber the orthodontist and be a rich (or at least very comfortable) housewife with the cushy suburban amenities she always thought she wanted. As it turned out, that was the life she thought she was supposed to want, not the life she actually wanted. She pulled a runaway bride at the altar, and even though her life post-jilting was a total mess for a long time, it was a total mess she chose, and a mess of her own making, which suited her just fine.

2. There is not enough coffee in the world.

Real talk. Remember when you were in college and you could party until 3 a.m., roll out of bed at 9 a.m. and still be a functional human being? Yeah, somewhere around your mid-20s, after a night of moderate drinking you realized you're just not built for that anymore, so you traded the booze in for coffee.

Coffee is the perfect go-to activity for business and pleasure rendezvous, not to mention the ideal accessory for a million other things you suddenly find yourself forced to endure in your 20s — things that make you want to crawl right back into bed. Plus it's totally respectable to sit around all day with your friends in a coffee shop rather than a bar. Why else do you think the gang spent almost all of their free time at Central Perk?

3. You have no idea what most of your friends do at work.

A running gag throughout the entirety of Friends was that none of them had any idea what Chandler did for a living. (Just to clear things up, he was originally an "executive specializing in statistical analysis and data reconfiguration," and later quit to become a copywriter. He was never a "transponster.")

The Chandler confusion is a pretty accurate representation of how many 20-somethings feel about their friends' jobs. Don't feel too alone when you suddenly realize that you have no freaking idea what most "adults" do between 9 and 5 every day.

4. You're going to date a long string of weirdos and losers before finding your lobster.

And we mean a very long string. Not all of them will be losers; some of them will be perfectly nice, fairly normal people who are perfectly wrong for you. You're going to date them anyway, though, because that's what you do in your 20s. Chandler dated Janice, for far longer than was reasonable. Monica dated "Fun Bobby" who was only fun because he was a raging alcoholic. Phoebe dated a guy who couldn't keep his nuts from hanging out of his shorts. Joey dated a girl who keeps punching him. Ross dated a woman who was really hot but also had a really, really dirty apartment. These are all variations on the same theme: weirdos you're going to sleep with in your 20s before you know better.

5. You're going to live with roommates for longer than you'd planned. Much longer.

When you were a kid, and you imagined yourself as a real, live, certified grown-up, did you picture yourself living with a platonic roommate in an apartment roughly the size of your parents' living room? Not a chance. One big wakeup call when you actually reach your 20s is that not only can you not afford the big, beautiful house you thought you'd be living in at this age, you can't even afford to live in a sixth-floor walk-up shoebox without a roomie to split the rent. Sure, Joey and Chandler and Monica and Rachel lived together for so long because they were BFFs ... but also because they probably couldn't afford not to.

And they're not going to love you back, and you're going to have to come to terms with that. It happens. This happened to both Ross and Phoebe, to different degrees. Ross' first wife, Carol, realizes she's a lesbian when she meets Susan at the gym, and goes on to have an affair that turns into a marriage. Phoebe married a gay Canadian ice skater. Okay, okay, she did it to help him get his green card, but that's a thing adults have to deal with too! Getting married so you can cross country lines? Very 20-something issue to deal with.

7. The age of the people you date (and hang out with) doesn't matter so much anymore.

When you were younger, the idea of dating someone much younger, or much older was out of the question. You dated pretty much within your peer group. That worked, because in college, your peer group was enormous, mostly single and around you at all times. When you hit your mid-20s stride, however, the dating pool gets smaller and, weirdly, you find that everyone sort of starts to look the same age to you. Is that guy 23 or 33?

Through the show's run, many of the friends dated people much younger and much older than themselves. Think Ross and Elizabeth, the much younger girl whose father Paul (Bruce Willis) disapproves of him. Or, Rachel and the college guy who stole from her. Monica and Richard. The list goes on, but the point is: Once we all have jobs and semi-adult lives, the playing field sort of levels.

8. You might find out that, hey, your best friends are actually pretty dateable.

Sure, in college you made out with almost everyone in your group, but date them? Please, that's your buddy! Suddenly, in your mid-to-late 20s, after dating the aforementioned string of weirdos and losers, you suddenly realize that your best bro is looking pretty good. Did they always look that good? Maybe they've been working out since graduation? Either way, sometimes it takes some life experience to see what was in front of you (or across the hall from you) all along. This was one of the biggest themes of Friends, with a lot of inter-romancing within the group and, ultimately, two long-term relationships: Ross and Rachel, and Chandler and Monica.

Speaking of Rachel ending up with Ross, and Monica with Chandler, the old adage of the nerds winning out in the end really does turn out to be mostly true. In your 20s, you realize it's not all about good abs and good hair (and bad attitudes). Nerds rule! A guy (or girl) you might have turned up your nose at in high school or college is now a confident, successful grown-up whose geeky personality traits are more charming than, well, geeky. Ross and Chandler were not cool dudes, but they won over the hearts of two amazing ladies in the end.

10. Some of your friends make a lot more money than you. Like, a lot more.

And some make less. That's another weird thing about hitting your 20s. Where you were all once semi-broke college kids, now, suddenly half your friends are unemployed or struggling artists and the other half are raking in six figures working some sort of finance job you don't quite understand (see No. 3).

The friends make this realization in the episode when Chandler and Monica want to surprise Ross with Hootie and the Blowfish tickets for his birthday and discover, much to their surprise (though, really, they should have known) that Joey, Phoebe and Rachel don't exactly have disposable incomes. The friends all enjoyed varying degrees of monetary and career success throughout the show — Joey as a long-struggling actor, Ross an esteemed professor, etc. — which was perhaps one of the most true-to-life aspects of the entire show.

11. You might never earn your parents' approval, and it turns out that's okay.

People spend a lot of their young lives trying to live up to who they think they're expected to be. A whole lot of that self-imposed expectation often comes from their parents. When you hit your groove in your late 20s and start making life choices for you and not for the you you think you're supposed to be (see: No. 1), it suddenly gets easier to distance yourself from familial expectations.

It took some of the Friends characters longer to get there than others. Monica spent many seasons trying to earn the approval of her stuck-up mother and went fairly crazy doing it. But guess what? It was all good, because, in the end, Monica finally realized that the only person she had to impress was herself. It's a good day when you have that particular "aha" moment. (Spoiler alert: Sometimes this doesn't happen until your 30s. Be patient.)

12. Friends really are the family you choose.

This is never more true than when you're living in a city far from home, sometimes on a different coast or even continent and you're still single. In the weird, figuring-it-out in-between time that is all of your 20s (sorry, it really is), the carefully curated group of close friends you choose to spend your time with really does serve as your makeshift family. And sometimes, that family is just as good (or better!) than the one you were born into.