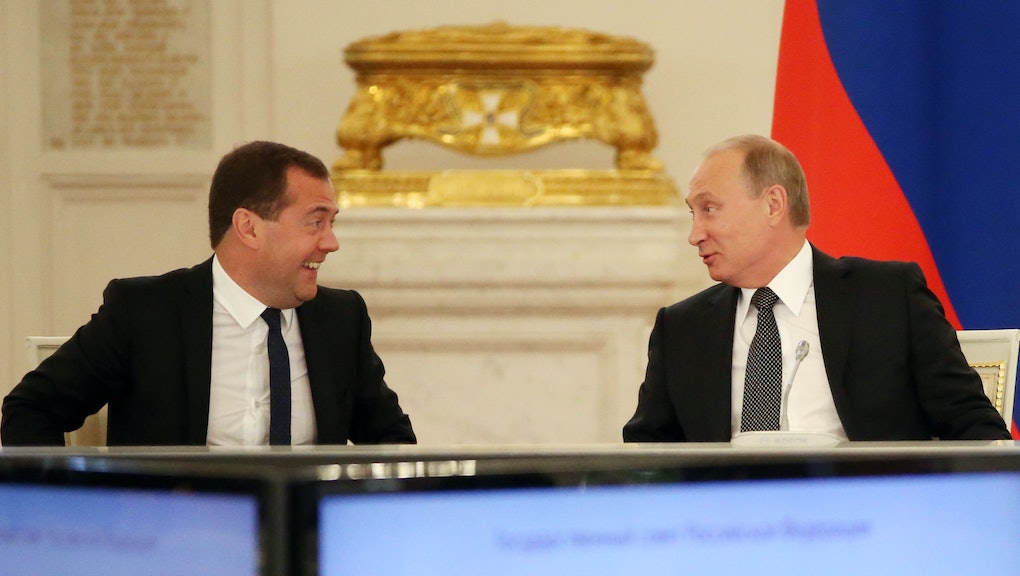 That could be the future in Russia, where a series of proposals under consideration by President Vladimir Putin would dramatically increase government control over citizens' online activities. It's part of a larger push by the country to separate itself from perceived Western control of media and technology.

The plan: Russian newspaper Vedomosti reported that Moscow is considering a system that would disconnect Russians from the Internet in the event of an emergency. "It is common knowledge who the main administrator of the global Internet is," Kremlin spokesman Dmitry Peskov told the country's Interfax news agency. "And due to their unpredictability, we should think of ensuring our national security."

Russia expert Andrei Soldatov told the Guardian that he didn't think Putin would go through with it and flip the Internet kill-switch, but called it a big deal nonetheless. "[It's a] real step forward in the development of a besieged fortress mentality," he said.

The government has previously considered (but since given up on) the idea of creating a "national Internet" (open only to domestic sites). The emergency turnoff proposal, along with ones to nationalize the .ru domain and exert control over the sites that use it, could be a sort of middle ground, short of taking over the whole shebang.

Not the first time: While Russia allows more online freedom than, say, China, there are plenty of previous government actions that point to a desire to restrict Internet activity, including having sites store personal data from Russian users and forcing bloggers to register as media outlets.

The proposals will be discussed at next week's Security Council meeting, according to the Independent, and may be introduced as legislation early next year. Russia is on the brink of a recession thanks to Western sanctions, and it may be everyday Internet users there who pay the price as Moscow fears U.S. spying and further sanctions.

While an emergency kill-switch might be painted as in the public's best interest, it is of course up to Putin what constitutes an "emergency." The idea of the government telling its people during an emergency that normal rules can be changed or circumvented is a scary thought and feels like the first step towards a powerless constitution of people's rights.  If the proposal passes in this form, Big Brother's going to be doing more than just watching — he'll have his finger on the power button too.