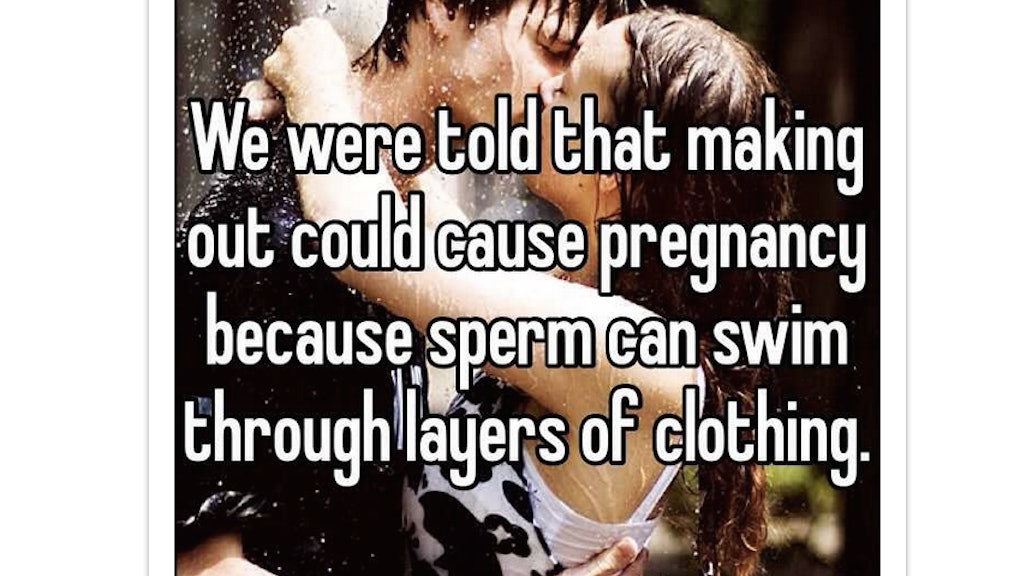 Sexual education classes in America are not exactly known for being the most comprehensive or responsible sources of information when it comes to reproductive health. Take the Mississippi high school that claimed girls who had had sex were akin to dirty pieces of chocolate or the Texas school that compared sexually active students to chewed gum — the list of the education system's terrible sex ed practices is seemingly endless.

Despite the inverse relationship between sexual education and teen pregnancy, some states still don't understand the benefits of giving teenagers proper and practical advice about sex. Given that adolescents consider schools one of the most trusted sources of information about sex, it's even more alarming when they screw it up.

Now, thanks to Whisper, an app that lets users share their thoughts and opinions anonymously, we have a better picture of the quality of sex ed across the nation. Unfortunately, it looks as though it's a terrible as ever:

The underlying threat is clear: Engage in sexual activity, and you'll start to lose your worth as a person. The repeated assurances that sex will lead to bodily harm — whether through STDs, pregnancy or some other terrible affliction — is reminiscent of Coach Carr's hilarious monologue in Mean Girls, but this time it's not funny. It's real.

Though the bizarre lessons apply to both male and female students, there's a pattern of shaming female bodies in particular. It's a disturbingly common tactic, but hearing it from the mouths of the students themselves makes it that much worse. This sort of rhetoric is bad enough when it targets adult women, but when it's applied to teenagers who are still deciphering their own identities, sexual or not, it's even more damaging.

Sex isn't and shouldn't be taught as something dirty and undesirable. These examples may not be representative of every single sex ed class, but they do seem to anecdotally illustrate what we've seen over and over — that proper reproductive health education is not a real priority for too many schools. If we want teenagers to grow into safe and responsible sexually active adults, this is not the way to go about it.