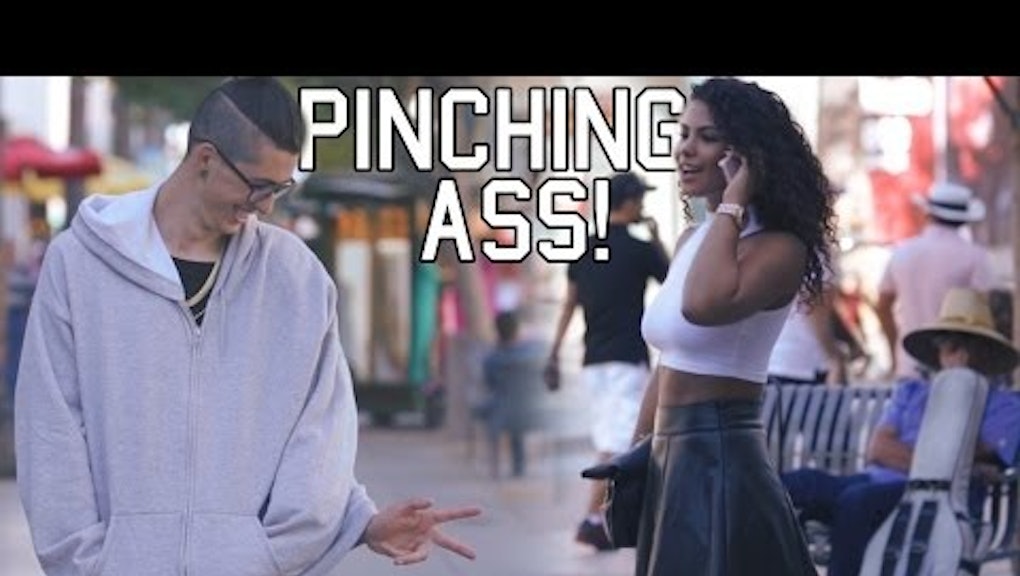 When is it OK to sexually harass women on the street? When it's for a YouTube video, of course!

That was the apparent thinking of reality-television star turned viral YouTube performer Sam Pepper, who came under fire this past weekend when his latest "prank" showed him sexually harassing women for laughs. The former Big Brother contestant, who has over 2 million YouTube subscribers, asked women on a busy street for directions while secretly grabbing their butts.

Because nothing's funnier than touching random women without their permission and catching the whole thing on camera.

This video is problematic for a number of reasons, most noticeably the way it treats women as props to be poked and prodded as part of some cheap magic trick. Pepper never appears to take the fact that this behavior might be insulting or embarrassing for them into consideration. As Sam Maggs noted over at the Mary Sue:

"Treating blatant sexual harassment of women as a 'joke' or a 'prank' contributes to the toxic culture in which we see this sort of behavior as normal; in which women are told that they must not have a sense of humor if they don’t like it; in which people think women wearing short skirts are 'asking for it.' It’s a perpetuation of rape culture, and it’s harmful to people of all genders."

In a sign of progress, however, Pepper's video was almost immediately deluged with complaints. Fellow YouTubers have even signed an open letter, spearheaded by YouTuber Laci Green, asking Pepper to pull his video.

YouTube itself took down the video, another hopeful move. However, not everyone seems to be getting the message:

This type of rationalization — but it was only a joke! — is exactly what Maggs was referring to above in terms of perpetuating a "toxic culture" that ultimately harms all genders. And while YouTube's decision to take down the "bum pinching" prank is the right one, Pepper's channel is full of similar videos in which Pepper exploits women for his entertainment. Other videos include "How To Steal Girlfriends," in which Pepper tries to hold the hand of random women who are out in public with their partner, "How To Make Out With Strangers" in which he kisses a bunch of women for no reason other than just to see if he can, and a "How To Get a Girlfriend EASY" in which he handcuffs women to himself "claiming" them as his girlfriend.

The only thing that’s missing is his “How To Be An Entitled White Straight Man And Get Away With Sexual Harassment" video. Moral of the story: When is it OK to grab a stranger’s butt without consent? Never. Let's hope Pepper wises up to this concept sooner rather than later.