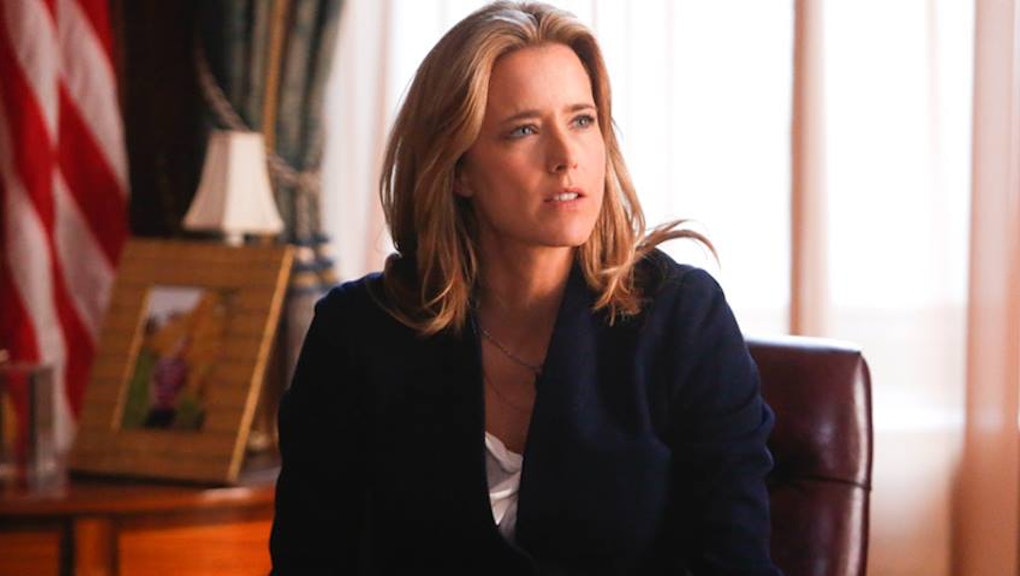 What a Political Hero Looks Like in 2014, According to Television

Hillary Clinton is the root inspiration for the new CBS drama Madam Secretary, which debuted Sunday night. In the series, Téa Leoni plays a brilliant, brainy, blonde secretary of state tackling problem after problem in the Middle East — most of which, at least in the first three episodes, are mirrors of events that took place during Clinton's own time as Madam Secretary.

In a preview piece to the premiere, Mother Jones tackled the similarity between the women saying, "It's pretty hard not to see [the series] as a fairly transparent attempt to make Hillary look like presidential timber."

After watching Madam Secretary though, it's clear that the show's secretary of state, Elizabeth McCord, is not Clinton or even close to Clinton. Instead, McCord is the secretary of state of our wildest political fantasies working in a Washington run on ideology and American dreams; a Washington where conflicts are free of gray areas, secretaries of state have time for midday strolls with their spouses and an international crisis can be solved in a 43-minute episode.

Leoni's McCord is painted as a hero. She may face hard choices, but she always makes the right decisions. It's in the qualities of her character that the show glorifies that Madam Secretary makes its most interesting, and perhaps unintentional, statements about American politics. By setting McCord up as a hero, the show lays out the ingredients for what makes a superhero politician according to Americans today.

The series opens with McCord, a former CIA analyst turned politics professor, living an academic, happy small-town life with her husband and children. Minutes into the series, the sitting secretary of state is killed in a suspicious plane crash, and the president (Keith Carradine) comes in person to McCord's home to ask her to move to Washington to fill the position. His pitch includes the first clue to just how this show wants you to see our hero McCord, with a line that bares a striking similarity to refrains we hear during real-life political campaigns: "You quit a profession you loved for ethical reasons. That makes you the least political person I know."

"I'm not big on protocol," McCord reminds us in a later episode and by golly the series wants that line to make you cheer. McCord's biggest political selling point is that she has no political aspirations.

The second core McCord-ism that is glorified by the series, and proven successful in the show's plotlines, is her creativity, her boldness and her willingness to do what she thinks is right at the expense of what other politicians think is right.

"You don't think outside the box. You don't know there is a box," the president says to McCord. The twists of plot determine that it's McCord's outside-the-box thinking, her back channeling, her crafty decision-making that make her so successful at her job and allow her to free the hostage, save the American, play the hero again and again and again. It doesn't hurt that McCord is successful without fail and that even the biggest international messes are tied up as neatly as a Law & Order episode. A hero politician must make the tough calls, always know instinctually what is right and never, ever be wrong.

The last piece of the perfect politician puzzle is McCord's personal side. McCord has sex with her good-looking husband, stays up-to-date with the daily drama of her three children and solves international crises from the landline in the kitchen. Can women have it all? McCord says yes. The show's creator and writer Barbara Hall said she wanted Madam Secretary to answer the question, "How do you deal with the president of the United States in the morning and the president of the PTA in the evening?"

Hall says she looked to Sen. Kirsten Gillibrand, who has young children, as inspiration for the character. McCord leans in, both at home and at work and neither area of her life would be as successful without the other. In real life it is no secret that Obama has been speaking more about his daughters in speeches, or that trotting out the grandchildren on the campaign trail can make a candidate more likable or that Mitt Romney just wasn't perceived as relatable enough. A hero politician must also have a human side, a kitchen table side, a glass of wine side — all of which McCord has in spades.

As for the show itself, is it worth the watch? If you were a fan of Commander in Chief it might be for you. If you were a fan of The West Wing you will be disappointed and if you're anything like me you'll be itching for that wicked Veep satire and signature House of Cards ruthlessness, a desire heightened by the presence of Sebastian Arcelus as one of McCord's staff. Put bluntly, the writing is a bit heavy-handed, the subtleties non-existent, the plots too tidy and emotional moments packaged so neatly that you are never given the opportunity to really feel. Still, the cast is exceptional and putting the series in the lead-up spot to The Good Wife means CBS is banking on Madam Secretary and may pump in the resources and brain power to make this show as good as it can possibly be.

Even with its shortcomings, Madam Secretary constructs what it believes to be an ideal American politician. A hero. One who is brilliant yet unpolitical, discerning yet compassionate, trustworthy yet cunning, saving the world yet home in time for dinner.

The moment in Clinton's tenure that reportedly inspired the show, were the Benghazi hearings cornerstoned by her famous words: "What difference, at this point, does it make?" In that moment in the global spotlight, Clinton was strong and operating as a woman in conversations with cultures perhaps not used to seeing women in that position of power. All of those ingredients go into the character of Elizabeth McCord, and the finished product is a reflection of what a superhuman secretary of state might be like. Even if the show doesn't match up to our hero's superpowers.