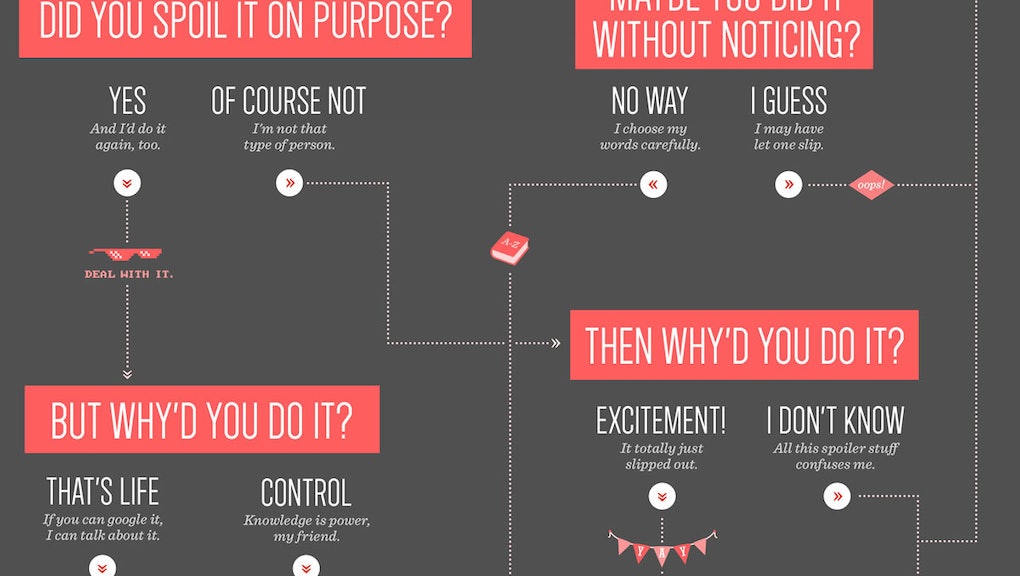 What Kind of TV Spoiler Are You? Check Out This Handy Flowchart

For all intents and purposes, there's a special place in hell for people who spoil TV shows and movies. The now well-known [SPOILER ALERT] tag has become ubiquitous on Internet articles and message boards, and for good reason: As bad as we know it is, there's something overwhelmingly fun about spoiling a show. But what kind of spoiler are you?

Commissioned by Netflix, a new study conducted by cultural anthropologist Grant McCracken examined the social norms behind the way we talk about and, more specifically, spoil TV show and movie endings and surprises.

According to the results, there are basically five types of spoiler profiles:

1. Shameless Spoiler — Everyone's living in the digital age, so it's their own fault if they're not up to date on a show.

2. Power Spoiler — You just like screwing with people's heads.

3. Coded Spoiler — You give just enough away to get people interested.

4. Impulsive Spoiler — You can't control yourself.

5. Clueless Spoiler — You've seen it, so everyone else probably has too.

To find out what kind of spoiler you are, check out this flowchart, or play through an interactive version on Netflix's website.

All five categories have their own interesting takeaways, but there's something particularly intriguing about the "Power Spoiler" label. Arguably, it's the worse kind, as it seems to have the most malicious intent in its effort to ruin the fun for your friends — not cool, dude.

"To know about a show that you don't know about is to have power," McCracken told the New York Times. "'I live in the future that you are about to occupy.'"

Arguably, Netflix was the perfect company to commission a study like this. With their serial-heavy, binge-watch-inducing shows constantly available to stream at any hour of the day, it's a prime culprit in a TV-viewing culture that can barely wait a week for the next episode to come out.

But the real bottom line, no matter what kind of spoiler you are, is just don't do it... even if everyone was dead the whole time.