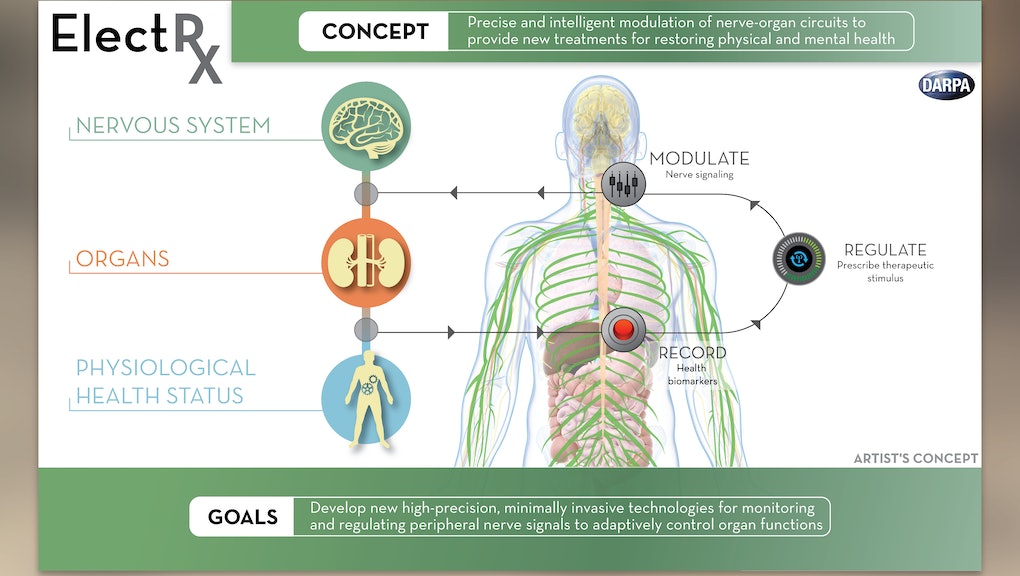 The news: Last month, President Obama announced 19 executive actions to improve the mental health of U.S. troops and veterans, and one in particular is ripped straight from the world of science fiction: ElectRx, a $78.9 million research program to develop "new, high-precision, minimally invasive technologies for modulating nerve circuits to restore and maintain human health."

In simpler words: DARPA is developing tiny, implantable robots that can monitor your body and send electric impulses to your nerves to help your body fix itself when something goes wrong — something like Stargate's nanites or Doctor Who's nanogenes.

"The technology DARPA plans to develop through the ElectRx program could fundamentally change the manner in which doctors diagnose, monitor and treat injury and illness," DARPA program manager Doug Weber said in a statement. "Instead of relying only on medication—we envision a closed-loop system that would work in concept like a tiny, intelligent pacemaker. It would continually assess conditions and provide stimulus patterns tailored to help maintain healthy organ function, helping patients get healthy and stay healthy using their body's own systems."

Eventually, DARPA hopes to create ElectRx chips no bigger than a single nerve fiber, allowing doctors to inject them with a needle.

How can this technology be used? While this technology isn't quite like Wolverine's famous self-healing powers, it can theoretically augment your body's natural neuromodulatory processes and intercept neurons and nerves that may be misfiring.

ElectRx has particular potential to treat inflammatory and immune system issues, such as rheumatoid arthritis and Crohn's disease. But the ultimate goal is to use the technology to treat brain and mental-health issues, such as epilepsy, depression and PTSD, which are especially relevant to DARPA and the U.S. military community.

As ExtremeTech notes, there are already similar neuromodulatory technologies at work, such as cochlear implants for hearing problems and deep brain stimulation, which has been a promising method of treating varying conditions such as depression and Parkinson's disease. But ElectRx would certainly take things to the next level, creating a full-body monitoring system that maintains your health by enhancing your own nervous system — and that's hard-core sci-fi right there.

For now, ElectRx is still in the beginning stage of its five-year program. And while the technology won't actually be in practice for a long time, the idea alone is crazy and exciting.