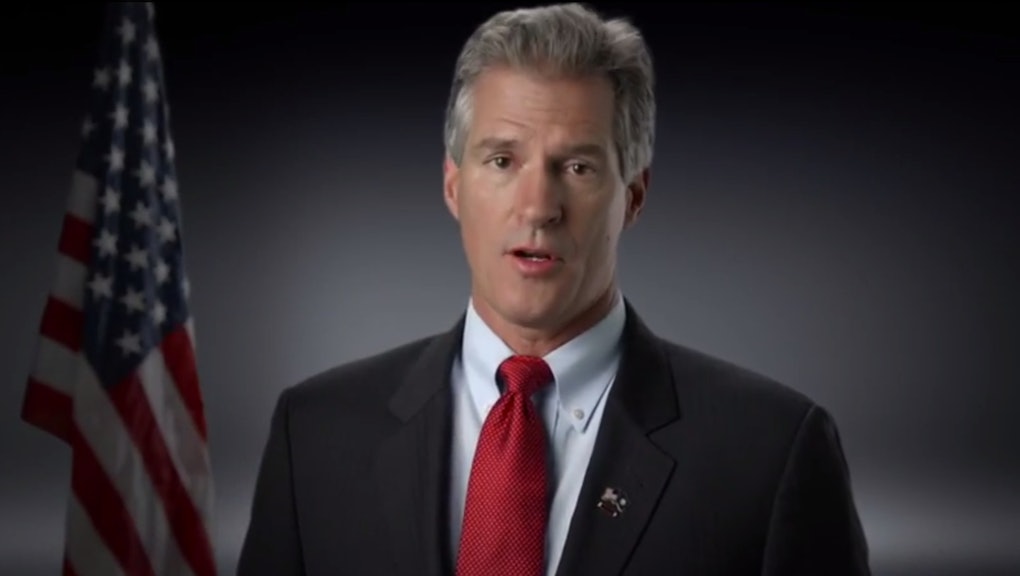 Scott Brown Has a New Ad About the Islamic State, and It's Mind-Numbingly Idiotic

Former Sen. Scott Brown, a Republican, is running for the Senate in New Hampshire. The United States is engaged in a new war in the Middle East against the Islamic State. These two events apparently could not exist in isolation for long.

Brown has a new ad attacking his opponent, Democratic Sen. Jeanne Shaheen, by linking the threat posed by IS militants to securing the border. It is a master class in hyperbole and red herrings.

Let's break it down.

"Anyone who turns on the TV these days knows we face challenges to our way of life."

OK, yes, perhaps. It's been a long summer with tons of horrible things flooding the airwaves. Ukraine. Ferguson. Syria. "Challenges to our way of life" is a bit dramatic, but let's move on.

"Radical Islamic terrorists are threatening to cause the collapse of our country."

Slow down. Sure, IS is a bunch of brutal thugs who have killed and maimed their way over large swaths of Iraq and Syria, but there's no evidence they have plans or the ability to attack the U.S. mainland. Even if we assume Brown was talking about Khorasan, a group the U.S. believes was in the "final stages" of preparing an attack before its leadership was taken out by U.S. airstrikes in Syria last night, one attack is still a long way from causing the collapse of the most powerful country in the history of the world.

This is only going to get worse.

"President Obama and Senator Shaheen seem confused about the nature of the threat — not me."

This might come as news to the president, who just dropped 47 cruise missiles on Syria. Shaheen, for her part, issued a statement this morning saying that "striking ISIL targets in Syria sends the clear message that the United States and its allies will take the fight to these terrorists wherever they are."

"I want to secure the border."

Huh? Where did that come from?

"Keep out the people who would do us harm."

Oh. That's where he's going with this.

The idea that terrorists are crossing the Mexican border has become a sort of right-wing fever dream perpetuated by the likes of Texas Gov. Rick Perry. Proponents of this idea, despite zero evidence that anyone affiliated with IS has in fact crossed the border, use this trope as a backdoor for tightening border security and playing on fears about migrants crossing into the U.S. For years, the Republicans' answer to any policy issue related to immigration has been to secure the border. Scott Brown has taken an innovative step in applying this same single-mindedness to Middle Eastern terrorism.

It's worth noting that the major threat from IS fighters does not come from them sneaking across the desolate Mexican border. They wouldn't have to. An estimated 2,000 foreign fighters in Syria and Iraq come from Western nations, meaning they can travel to and from most countries as they please using their own passports. The U.S. is far more concerned with these fighters gaining access to the U.S. by totally legitimate means. All 19 9/11 hijackers entered the country on legal visas, not by sneaking over the border.

Also, conflating "people who would do us harm" with every single person crossing the border is a very subtle attempt to link immigrants seeking a better life for themselves and their families to radical terrorists who behead innocent civilians.

"And restore America's leadership in the world. I'm Scott Brown, and I approve this message. Because protecting the homeland is the first step to making America strong again."

And that we can all agree on. Unfortunately for Scott Brown, he may have to work toward that goal in some capacity other than United States senator — he's losing to Jeanne Shaheen by five points in the latest polls. Maybe he can drive his truck down to Texas and keep those nonexistent IS fighters out himself.