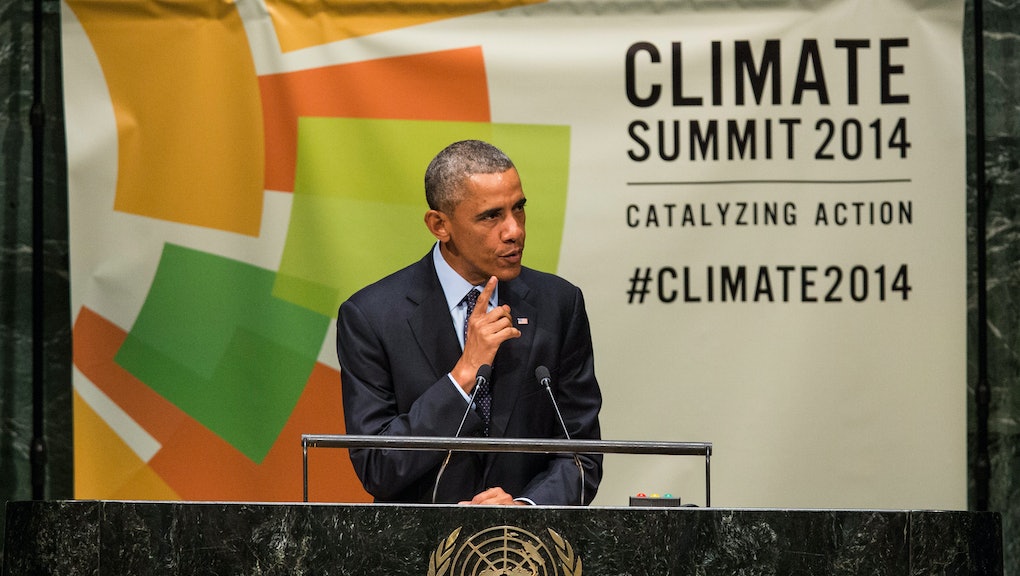 Climate change activism is having a moment, and President Barack Obama wants to capitalize on that with a new set of cooperative international efforts as well as an executive order.

Obama laid out his vision Tuesday to more than 120 world leaders at the United Nations.

"For the immediate challenges that we've gathered to address this week — terrorism, instability, inequality, disease — there's one issue that will define the contours of this century more dramatically than any other," he said. "That is the urgent and growing threat of a changing climate. No nation is immune."

The international partnerships are a mouthful — Global Alliance for Climate-Smart Agriculture, the Oil and Gas Methane Partnership, the Pilot Auction Facility for Methane and Climate Change Mitigation and the Cities Climate Finance Leadership Alliance — but the executive order should have more immediate dividends. It requires federal agencies to "factor climate resilience into the design of their international development programs and investments," according to the White House, cementing environmental issues as a major part of how we spend money abroad.

A larger movement: It's not just the president who's focused on this issue. Hundreds of thousands of people took part in the People's Climate March on the streets of New York City this past weekend as a message to UN leaders to keep environmental concerns at the forefront of the meeting.

Actor Leonardo DiCaprio got in on the action before Obama did, making a speech to the UN on the dire situation.

"You can make history or you can be vilified by it," DiCaprio told the assembled leaders. "None of this is rhetoric and none of this is hysteria. It is fact."

Out of the spotlight: Despite Obama's big move on climate change, another policy of his eclipsed his speech to take center stage Tuesday. The U.S. started airstrikes in Syria, aiming to take out Islamic State targets in a plan Obama outlined earlier this month.

While Obama's approach received tentative congressional approval, the country's military approach in Syria and Iraq will very likely be subject to further political debate following November's midterm elections. Until then, expect other issues like climate change to take a backseat.

That being said, political attention is not exactly a zero sum game — the president can make a speech announcing a wave of new environmental partnerships and policies the same day huge military news breaks. The latter may get the front-page headlines, but the former may end up being more important for years to come.