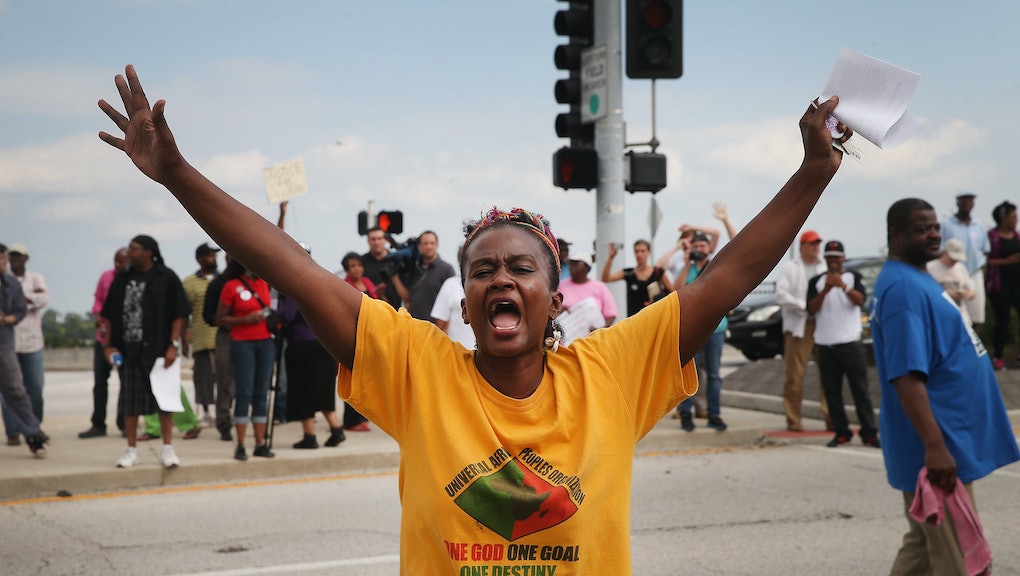 How Ferguson Changed America for Good, in One Striking Chart

The first step in solving a problem is admitting it exists, and according to a new survey by the Public Religion Research Institute (PRRI), that's what a majority of Americans have done.

According to PRRI's American Values Survey, 56% of Americans now disagree with the assertion that the criminal justice system treats whites and minorities equally, up from 47% in 2013.

The most striking thing about the numbers is their uniformity. Between August 2013 and August 2014, Americans of all stripes — Democrats and Republicans, young people and old, Hispanics and whites — showed an increase in the belief that minorities are unfairly targeted. And while a majority of seniors and Republicans still think the two groups (whites and minorities) are treated equally, each category showed a significant uptick in the number who see racial bias as a systemic feature of the U.S. justice system.

In other words, Americans may finally be starting to come to terms with the institutional racism that plagues the country.

Ferguson likely played a big part in the shift. It's difficult to pinpoint the exact moment when American attitudes began to change, but given that there was a dramatic transformation, rather than a smaller, more incremental change, it's likely that this year's string of high-profile police brutality cases had some effect.

Michael Brown's death at the hands of the Ferguson, Mo., police and the fatal NYPD chokehold that killed Eric Garner were the two incidents that drew the most national attention over the summer, but recent tales of police brutality are everywhere. Take Darrien Nathaniel Hunt, who was shot and killed by police in Utah for carrying a toy sword. And Victor White III, who cops claimed committed suicide while handcuffed in the back of a police cruiser. And Gregory L. Towns, who died after police shot him with Tasers 13 times.

Compare these incidents to the case of Sarah Culhane, a white 19-year-old woman from New Jersey who reportedly plowed her BMW into three cars and kicked a police officer in the head. She was merely apprehended — not hit with a stun gun, not shot and not subjected to bodily harm.

Of course, minority communities have known this for a while. Take this Atlantic Media/Siemens State of the City poll, conducted before Michael Brown's death, which found that only 35% of urban minorities reported they had "a lot" of confidence in their local police forces. A full 25% said they had "not much" or "no confidence" in local law enforcement agencies.

A recent USA Today/Pew Research Center survey saw similar results. More than 9 out of 10 blacks thought cops did an "only fair" or poor job when it came to "equal treatment and appropriate force."

This latest survey could mean the start of something new. As much of the media coverage during Ferguson — liberal and conservative alike — illustrated, it can be incredibly challenging to get white Americans to see racial issues within the criminal justice system. To that end, PRRI's survey may indicate some progress in casting bias as a national, rather than purely racial, issue.

But racial disparity, particularly where institutional racism is concerned, is far from over, and assuming anything else is naive at best. These attitude changes are welcome, and it's worth hoping they will lead to tangible shifts in public opinion and policy.