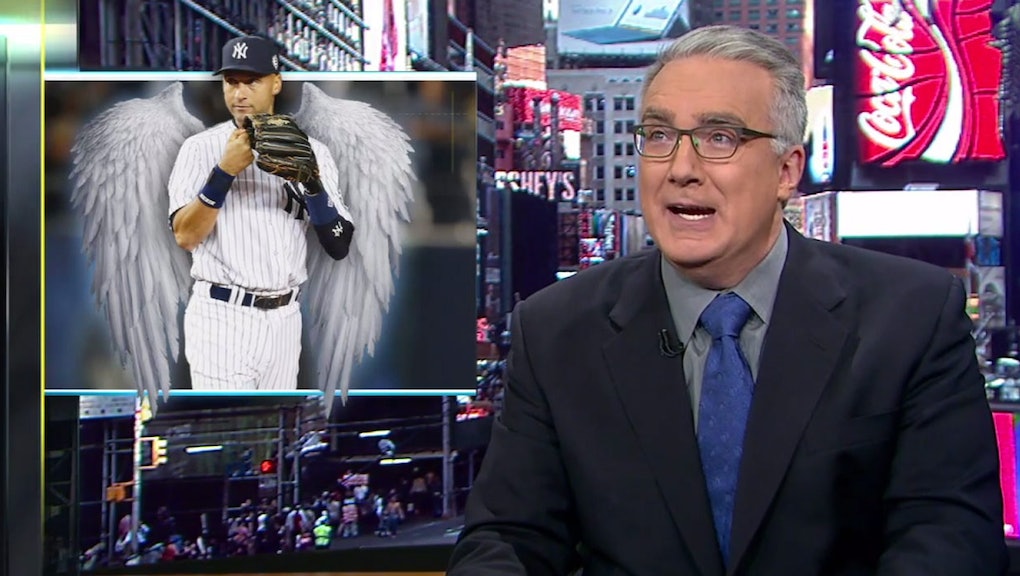 Keith Olbermann opened his ESPN2 show Tuesday night with an attention-grabbing invective that was a little more frivolous than his usual rants that make a splash. His subject: The Derek Jeter farewell tour, and his distaste for it.

“We begin with a correction,” Olbermann says. “He did not invent baseball, he did not discover electricity, he is not the greatest shortstop who ever lived. And among all the terrific players in the history of the New York Yankees he is not by any measure number one.”

Olbermann rants over a series of clips of teams giving Jeter gifts to commemorate his retirement from baseball — including golf clubs, wine, boots, a surfboard, a gold bat, a bench made of bats and a framed photograph that looks like something you’d buy at a mall kiosk given to Jeter by longtime Olbermann nemesis George W. Bush. (That’s a nice touch, producers.)

“Which brings up another correction: He’s not dead yet!” Olbermann says. “Maybe we could have skipped the patch on the shirt and the cap. It’s creepier than hell!”

Later, Olbermann brings up Jeter’s place among Yankee greats, and how he hasn’t been one of the best players in both traditional statistics and the advanced WAR stat. He points out Jeter has a worse WAR-per-season as a Yankee than Red Ruffing, who played for the Yankees for 15 seasons in the '30s and '40s.

To be fair to the Captain, Jeter has played 20 seasons. But Olbermann appears to have anticipated this complaint: Among the 19 players with the 12,000 plate appearances, the host points out, Jeter ranks just 12th to 14th in many major offensive categories — but he struck out the most.

To end his bit, Olbermann pulls a stunt yet: He calls on Jeter to retire at the end of his final homestand at Yankee Stadium instead of playing in a final series in Fenway Park to end the season. After all, he says, Ted Williams played his final series in Fenway and then retired before the road trip. Olbermann wants Jeter to “show [him] something” by copying Ted Williams’ steez.

Olbermann seems to anticipate pitchforks for his rant, and surely his segment will attract attention across baseball blogs. But people — especially plugged-in baseball fans — have been dwelling on Jeter’s true value for about a decade now. People have questioned if batting Jeter second cost the Yankees a playoff spot.

And even if fans don’t feel Jeter fatigue, surely they’ve experienced the idea of it through another oft-overpraised athlete: Tim Tebow, Brett Favre, Jeter’s old teammate Mariano Rivera. Some people in Philadelphia were even sick of the Taney Dragons, with how much coverage the Little League team received. People can get tired of anything. Olbermann has many allies here.