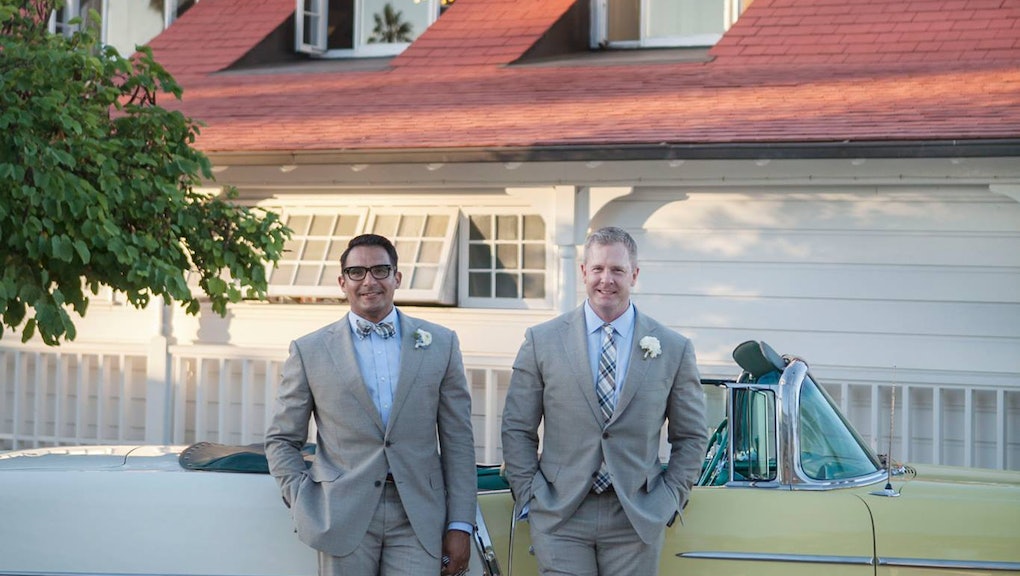 Homophobic Slurs Ruined This Gay Couple's Wedding, But That Wasn't the End of the Story

A wedding ceremony is a life marker and a celebration, especially for people within the gay community who have fought hard to win the right to say "I do."

Which is why the wedding of Oscar De Las Salas and Gary Jackson at Centennial Park on Coronado Island, near San Diego, Calif., was so bittersweet.

The pair's Aug. 17 ceremony was interrupted when homophobic slurs were hurled from a luxury condo complex nearby. "During the wedding vows, everyone stopped and turned," De Las Salas told ABC15. "He took from me, my husband, and my guests a moment of joy, a simple moment of joy."

Due to the history of LGBT hate crimes in America, De Las Salas was concerned that the slurs would escalate into physical violence, particularly during the culminating moment of the ceremony when he kissed his groom. "It was a moment of fear," he told ABC. "I'm thinking, 'God forbid this person has a gun and decides to open fire.'"

"We were so stunned. We didn't know what to do. I was quite shocked to be in San Diego and to have that kind of hate-filled speech come out of someone," wedding guest Allen Kimbrough told 3TV.

But the story didn't end there, fortunately.

De Las Salas wrote about the incident in an article for Gay San Diego, and it didn't take long for the account to go viral. The newlyweds were deluged by an outpouring of support. One of the over 2,000 messages was sent by Coronado resident Alisa Kerr, who offered to give the couple a new wedding party.

"My local friends and I would like to invite you and Gary out for a party to celebrate your union and make up for the treatment you received while you were here," she wrote, according to De Las Salas' Facebook post. "I hope you’ll give us the opportunity to show you how accepting, kind, and amazing Coronado and its residents are! It will be a lot of fun! Local businesses have already gladly agreed to help make the event super special for you guys."

De Las Salas and Jackson plan to return to the island to celebrate. "As I said, good always prevail, and LOVE IS LOVE," he wrote on Facebook. "So, Vamonos!"